The Bruce Morelan Collection by Joshua McMorrow-Hernandez for PCGS ……

Those are the words of Laura Sperber, founder of Legend Rare Coin Auctions.

She’s handled more than $1 billion in rare coins over her four-decades as a coin dealer, but “these” coins she helped procure for longtime collector Bruce Morelan. They represent the pinnacle of her career and helped secure Morelan, a numismatist not yet even in his 60s, an indelible place among the hobby’s greatest collectors.

Now, The Bruce Morelan Collection is set for sale, to be offered by Sperber’s boutique auction house on October 8 at the Regency Auction 41. The landmark sale, to be held at The Bellagio in Las Vegas, Nevada, will include an extensive selection of outstanding rare coins from Morelan’s wide-ranging collection.

It’s a cabinet that Sperber has personally helped Morelan build over the course of decades.

“On one hand, my heart is heavy. Each [coin] was so carefully studied,” she says. “When we knew it was right for the set, we pounced,” she adds, recalling countless occasions when she and Morelan mutually agreed to bypass bidding on certain coins because they just weren’t the right fit for Morelan’s superior collection.

“However, now that Bruce has decided it’s time to see these coin moved to new homes, I am happy to be able to see them through the process in one of our Regency Auctions, which were created specifically as a home for high-end coins like these.”

Among the Bruce Morelan rarities to be paraded on the auction floor in Vegas are the finest-known 1794 Flowing Hair Dollar and 1804 Draped Bust Dollar – two A-list numismatic superstars that, when they have hammered in past sales, made headlines on the evening network news and across myriad internet-based media outlets. Both coins belong to the magnificent Bruce Morelan Collection of Early Silver Dollars, a multi-million-dollar set of United States dollar coins dated 1794 through 1804 and representing the earliest period of the nation’s silver dollar production.

The 1794 Flowing Hair Dollar to be auctioned in October is graded SP66 by PCGS and is a Specimen-finish coin that many numismatic experts agree is most likely the very first individual silver dollar ever struck by the United States Mint. Its provenance traces through the historic cabinets of Virgil Brand, Art and Paul Kagin, Will W. Neil, and the Cardinal Collection. Bruce Morelan bought it in 2013 for a world-record price of $10,016,875 (including the 17.5% buyer’s premium).

That price–the highest ever paid for an individual coin in a public auction–granted Morelan the opportunity to serve as noble steward to an American treasure. Though no known records prove this, if this 1794 Flowing Hair Dollar were struck as an inaugural presentation piece, then it was most likely personally examined in the hands of the first director of the United States Mint, David Rittenhouse. Others who may have also held the coin could realistically include then-President George Washington, then-Secretary of State Thomas Jefferson, then-Secretary of the Treasury Alexander Hamilton, and possibly additional Founding Fathers of note. This 1794 Flowing Hair Dollar may have also once belonged in the United States Mint Cabinet before entering private hands in the middle of the 19th century by way of Mint Director James Ross Snowden, who traded such rarities with collectors in possession of one-of-a-kind Washingtonia. Still, on its own merits (those plainly visible to the naked eye anyway), the Morelan 1794 Flowing Hair Dollar stands a head above any “typical” 1794 Flowing Hair Dollar–if that word is to even be applied to this rare first-year type coin.

“We have sold several seven-figure collections in the past, as well as individual coins over $1 million, including the PCGS PR64DCAM Quintuple Stella for $1,880,000, so we have experience with these types of values,” says Sperber, whose Lincroft, New Jersey, coin firm manages several major auctions each year. “But there is nothing in the entire hobby that can compare to the 1794 SP66 Flowing Hair Dollar,” she adds.

This incredible piece exhibits a warm gray-gold patina with highlights of various hues and is graded a “Specimen” due to several important factors.

Among the considerations PCGS made in grading this example a Specimen is its identical die state to that of a copper die trial, the fact it is one of the few such 1794 Dollars struck by aligned dies, and the utterly prooflike appearance of the coin – it is clearly evident the planchet was specially prepared through a method known as burnishing. Furthermore, this is the only known example of a 1794 Flowing Hair Dollar containing a special silver plug inserted into the planchet at the Mint to ensure the coin was properly weighted. By every measure, this 1794 Flowing Hair Dollar is unlike any other known to this day.

“One of the highlights for me while assembling the [Early Dollars] set was being able to take the 1794 Flowing Hair Dollar to museums for display, including to London for an exhibit,” recalls Morelan. “I was able to take my son with me on that trip, and being able to share the history and passion I have for this set with him, and also to be able to share it with so many others who would have never seen it otherwise, is a really great memory for me.”

Another Bruce Morelan rarity crossing the block at The Bellagio is the 1804 Draped Bust Dollar, a seven-figure gem known as “The King of American Coins”. 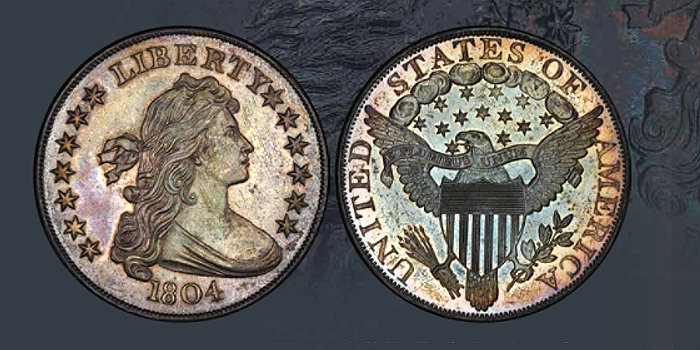 The 1804 Draped Dollar was struck in the mid-1830s for inclusion in special Proof sets presented as diplomatic gifts to foreign heads of state and ranks as one of the rarest United States coins ever struck. Just 15 were minted, including eight originals known as “Class I” strikes, with two classes of restrikes constituting the balance of the tiny mintage. Morelan’s PCGS PR65 specimen is pedigreed to legendary collectors James Dexter and D. Brent Pogue. It is the only specimen certified by PCGS at that grade and there are just two graded higher.

“One of the things that was always most important to me was to find coins that had the right look for my collection, even if they weren’t the absolute highest grade,” Morelan remarks. “This meant that I had to spend a lot of time looking at coins as they came available, even if I already owned that date to see if they matched what I was looking for better than the one I already had. I always wanted to make sure I had the finest, most eye-appealing coins for my collection, even if they were just the slightest bit better than what I already had. I’ve probably spent almost as much time looking at dollars I don’t own as I have looking at ones I do.”

It’s a philosophy that he and Sperber took to heart when considering candidates for The Bruce Morelan Collection, a cabinet encompassing a broad array of coins equal in rarity and splendor to any of his exquisite silver dollars. Consider some of the bronze selections from his assemblage of early type coins, such as the 1797 Liberty Cap Half Cent graded PCGS MS66BN and the 1793 Flowing Hair Wreath Cent graded PCGS MS66RB.

“Creating a mint was such an important part of the early years of our country,” says Morelan, speaking on the importance of early type coins and the rich history they reflect. “I was always fascinated with the undeniable link between the growth of America and the mintage of our currency. With each of these coins, it’s like looking at a time capsule of an important moment from our past.

“It’s also fun to think about how and why these coins were saved in such incredible condition at the time of minting. With the 1794 [Flowing Hair Dollar graded PCGS SP66], there has been a lot written on why it was preserved, but for the other first-year coins there isn’t any definitive answer. Especially with the gold coins, which represented real wealth when they were created. It’s just amazing to see them preserved so well.”

As with any major sale involving super-rarities such as the 1794 and 1804 Dollars, The Bruce Morelan Collection event is likely to lure many major players, including those from outside numismatics who are nevertheless drawn to owning trophy coins.

“I just hope the coins go to collectors who value the coin for everything it represents,” says Morelan. “The grade, eye appeal, history behind it… Each of these is worth admiring, and I hope the new owners really appreciate the whole instead of just one part of it.”

Bruce Morelan has been a PCGS Set Registry member for many years. Going by the handle “TRADEDOLLARNUT”, Morelan has assembled some of the finest Registry Sets in PCGS history, and as his collection heads off to auction he still holds several top rankings among his dozen-plus sets.

“I hope that people appreciate the quality and care that went into adding each coin to my collection, and that people can always tell that only the most appealing coins were ever included in all my sets,” Morelan remarks. With the sale of his early silver dollars and other exceptional early type coins, other PCGS Set Registry members have a rare opportunity to acquire some elusive finest-known and top-pop coins that can propel any number of Registry Sets into lead positions.

“I just hope that the new owners feel the same way about these coins that I have.”

“Bruce has been my business partner since 1997. I know him. I know how he thinks. We worked incredibly as a team. I stand by this comment: Bruce is the most knowledgeable and aggressive collector ever. When he is building a set, if there is a coin 0.25% better, he will buy it. He crowned his collection with a blowout bid on the 1794 PCGS SP66 Flowing Hair Dollar,” she says.

“It truly is the set of the century. There are coins in it that are once-in-a-lifetime coins.”