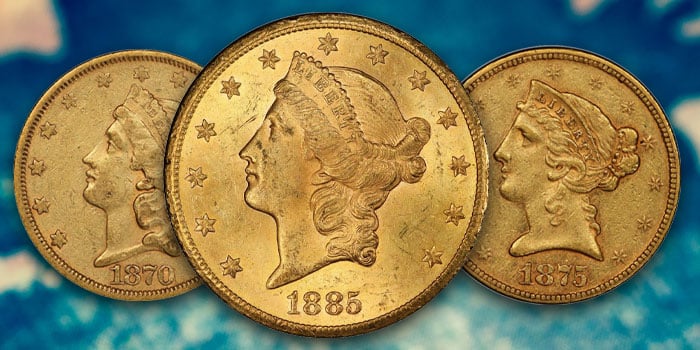 The incredible Hendricks Set of United States Gold Coins from the Fairmont Collection sold for over $13.6 million USD in the Stack’s Bowers Galleries Spring 2022 Showcase Auction, more than doubling the overall pre-sale estimate.

Presented across 506 lots, the coins in the Hendricks Set realized an average value of nearly $30,000, with 17 lots achieving six-figure prices. More than 350 lots, over 70% of the collection, set new auction records for the grade or overall issue. All of the coins were certified by PCGS and 349 coins, almost 69%, were approved by CAC. Sold by Stack’s Bowers Galleries on Thursday, April 7, it was the most highly anticipated cabinet of Liberty Head gold coins to be offered in recent years. These outstanding results contributed to nearly $37 million in total prices realized for the Stack’s Bowers Galleries sale—a 60% increase above the pre-sale estimate.

The Hendricks Set featured a nearly complete collection of $5, $10, and $20 Liberty Head gold coins, with additional selections from the Classic Head, Indian Head, and Saint-Gaudens series. As with prior offerings from the Fairmont Collection, the Hendricks Set coins are distinguished by incredible originality and eye appeal, and they had been ranked among the top PCGS Registry Sets in their respective categories.

This offering was highlighted by an incredible 1870-CC double eagle that sold for $840,000, more than twice the existing record.

The top 10 results from the Hendricks Set from the Fairmont Collection include:

These exceptional prices along with hundreds of record-setting results make this $13.6 million offering of the Henricks Set a historic evening for collectors in these series. Complete prices realized for the $13.6 million Hendricks Set from the Fairmont Collection can be found in the Stack’s Bowers Galleries Auction Archives.

Continuing this momentum, the firm is now ready for their June 2022 Showcase Auction of U.S. Coins, which is posted online.

The firm is also accepting consignments to their August 2022 Global Showcase Auction that will present items across every numismatic area including U.S. coins and paper money, Numismatic Americana, World and Ancient coins and paper money, and physical cryptocurrency. This event will feature lot viewing at the ANA World’s Fair of Money in Rosemont, Illinois.

In addition, the firm offers monthly Collectors Choice Online (CCO) Auctions in every category. To consign your collection to an upcoming auction, contact Stack’s Bowers Galleries today at [email protected] or 800-458-4646.