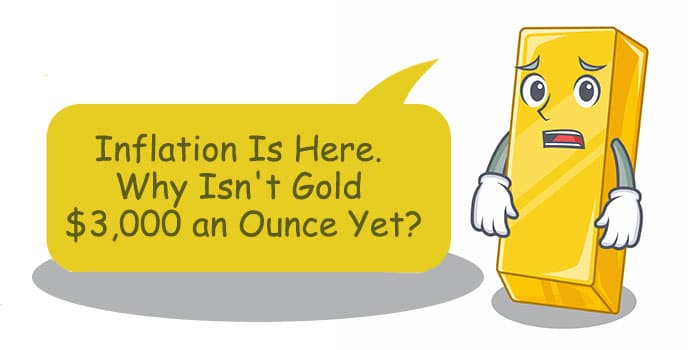 It seems like a frustrating time to make decisions on precious metals. So many people want to buy and sell precious metals and aren’t sure what to do. Should they wait? Buy now?

Let’s be frank—the current state of the economy is crummy. Even if some of the economic reports are genuinely positive, this is certainly not the best economic picture imaginable. Not by a long shot.

Unemployment may be low, but inflation is still problematic. The Federal Reserve is trying to stem rising prices by increasing the key interest rate, but too much of that may send us into a recession. And the stock market isn’t what it was in 2020 or 2021. If you’ve got a stock-based retirement plan and are over the age of 55 or 60, I really feel for you. If you’re in your early 40s (like me) or younger, you’re buying stocks at a bargain price and should probably keep on doing that. There’s plenty of time for the market to improve. And it will. Buy low, sell high—right?

But stocks aren’t what we’re here to talk about. We are focusing on precious metals, because right now there are plenty of folks out there who have no idea what to do with gold, silver, or other bullion and need some advice.

Making matters even more complicated is that bullion doesn’t seem to be playing by the rules right now – or at least not by the rules so many of us are used to. You may know one of the old golden “rules” where rising inflation tends to mean rising bullion prices.

As you read this, bear in mind I’m not an investment expert, a financial consultant, or a bullion advisor. I’m a journalist and author who, just like you, is trying to make sense of everything we are facing right now. I also like looking back on things with a historical perspective, because if we don’t look back on where we’ve been, we may not have as clear a view of where we’re going.

I want to take us back to the late 1970s and early ‘80s for a moment. Some of you may remember it, some probably don’t. I was alive in that era but not cognizant of the crazy socioeconomic and geopolitical whirlwind of the day. I was too busy just being a baby.

We had sky-high inflation, soaring interest rates, rampant job insecurity, and a looming nuclear threat from Russia. Sound familiar? We were in some of the chilliest days of the Cold War and things weren’t much better in the Middle East, either. Does the energy crisis sound familiar? It should. And even if all this talk of electric cars and solar panels sounds new to you, it shouldn’t. You might remember we were talking about them quite a bit during the days of disco. With gas prices soaring above a dollar at that time, we were looking for alternative and cheaper energy any where we could get it.

Amidst all the troubling headlines, there was another big story going on. Gold and silver were reaching record prices, but not for the same reasons. Runaway inflation and global tensions between Russia and Afghanistan and a revolution in Iran were helping push the price of the yellowish metal northward, and the value of the dollar was taking a big hit, too.

Meanwhile, the bulk of the world’s private silver holdings was being scooped up by two brothers named Nelson and William Hunt in an attempt to corner that market. Gold hit $850 an ounce and silver topped $50, both in the earliest weeks of 1980, before falling to figures that saw relatively little significant change for years to come.

If inflation and global tensions are what caused gold to rise in the late 1970s and early ‘80s, you may wonder why gold is so cheap today, when inflation and global tensions are exactly what rule the headlines. But hold on a second. Is gold cheap? For decades, silver and gold were priced on a 17:1 ratio–that is, 17 ounces of silver were worth what one ounce of gold was fixed by the government. Today, the whims and wiles of the free market largely influence bullion pricing. If we went back to a 17:1 ratio with gold at around $1,650 today, silver would have to be priced at about $98 an ounce. Or, conversely, with silver at about $20 an ounce, gold would trade closer to $340. Using that model, gold is either overpriced and silver is cheap or the old rules may not apply anymore. Frankly, I lean toward the latter.

We don’t necessarily need inflation to push gold prices to the ceiling.

Think back to 2012, when gold hit new highs of $1,800 an ounce, or to the summer of 2020, when gold surpassed $2,050. The influencers then weren’t rising prices on milk or housing, but rather a weakening dollar and overarching economic uncertainty. Inflation really wasn’t the problem then that it is today, with prices rising at about 3% back in 2012 and approximately 1% in the summer of 2020.

We can’t pretend inflation is a non-factor in gold prices. It’s just not the only one. There are many economic factors in play right now, and the current constellation of events won’t necessarily drive gold and silver into the stratosphere.

For one, we are still coming out of a pandemic–one that not only killed millions and sickened scores more, but also reprogrammed the way people think about their jobs, their lives, and where and how they live. The supply-chain shortages we are currently facing influence global inflation (no, inflation is not just an American problem), but this is also partly due to many people deciding they don’t want to be manufacturers, truckers, or laborers anymore. This isn’t necessarily a good or a bad thing. It’s just an empirical acknowledgment. And it’s slowed down how quickly things are made and distributed.

The unrest overseas seems like it may lead to dystopian fates, but there is still a reasonable hope that the conflict between Russia and Ukraine can end without a nuclear catastrophe. Yet other pockets of the world also demand our attention, too. China. The Middle East. North Korea. South America. It seems there’s something ominous going on in just about every corner of the globe right now. But is this really a new phenomenon? No.

And unlike the case of the late 1970s and early ‘80s, when unemployment lines were growing, if you want a job right now, you can probably get one – with a signing bonus not outside the realm of possibility. There are plenty of opportunities waiting for you in trucking, plumbing, carpentry, medicine, housing, and in many dozens of other shorthanded fields.

And we can’t forget one other elephant in the room that wasn’t there 40 years ago: cryptocurrency. Billions upon billions of dollars have been parked in cryptocurrencies over the last several years, with speculations that money invested in these digital currencies could explode in value by many multiples. Those who invested in Bitcoin a few years ago did very well for themselves, but as more recent history has shown, results are spotty at best.

But what if crypto hadn’t entered the picture? It’s natural to assume that at least some of that crypto money would have been invested in precious metals, and this would have helped buttress precious metals prices a little better.

This being said, where do we go from here?

With all the flash and dazzle of the day, it’s easy to get lost in the confusion of the moment. This may not be gold and silver’s glitziest moment, but they are still healthy, strong, and ready if and when the going gets tough. This is of course no surprise; gold and silver have been prized commodities for 5,000 years. That’s five millennia. Cultures have come and gone, wiped off the map and born anew. Yet silver and gold are still here, still valued, still treasured.

Why should we believe that anything we’ve seen in the past few years is enough to dramatically diminish the importance of gold and silver, which have proven themselves time and time again for 50 centuries?

Approach gold and silver not as the quickest vehicle to getting rich, but as one of your surest vessels to staying wealthy. Gold and silver are best thought of as safety nets and insurance plans. They’ll help protect you if the value of the dollar falls and will remain strong through some of the roughest economic times you can imagine. Believe it or not, what we’re going through today is not the worst it’s ever been. The Great Recession, stagflation, and the Great Depression were really bad times. And we–or our parents, grandparents, and great-grandparents–got through them. This is a rough patch, yes. But we will get through this.

No one worth her salt as a bullion advisor will ever tell you to throw all your money at gold and silver. But anybody of prudence will remind you that gold and silver are fundamentally important additions to any investment portfolio, and if you have the financial positioning to do so, you might consider stocking away some percentage of your investment dollars in precious metals.

How much only you can determine. However, allocating anywhere from 3% to 10% of your investment dollars in precious metals is generally regarded as a safe approach. At that rate, you can afford to make meaningful purchases of bullion without risking too much pain during the bearish markets while still inviting plenty of reward when the bullion bulls are raging. And, sooner or later, those bulls are sure to come a-calling.