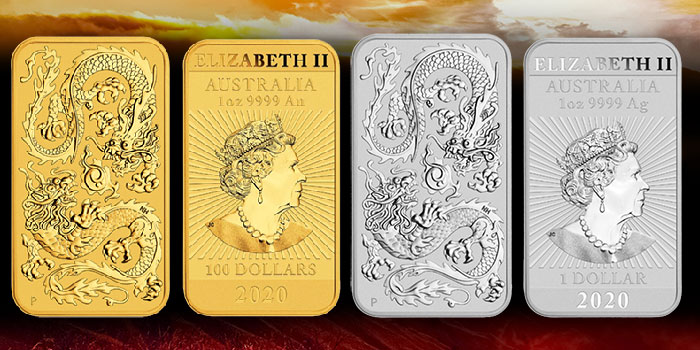 The Perth Mint is excited to release these 1oz gold and silver bullion coins featuring two Chinese dragons in a unique rectangular format.

In Chinese culture, the dragon is revered as a divine mythical creature, a symbol of power, strength, wealth, and good fortune, and it is often portrayed alongside a luminous or flaming pearl. Dragons are also believed to be the rulers of water and weather.

Each coin is struck by The Perth Mint from 1oz of 99.99% pure gold and silver, respectively, and issued as legal tender under the Australian Currency Act 1965.

The Jody Clark effigy of Her Majesty Queen Elizabeth II, the monetary denomination, 2020 year-date, and the weight and fineness are depicted on the coin’s obverse.