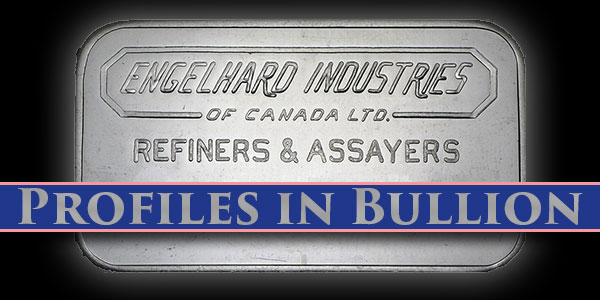 It isn’t every day that you get to talk about an honest-to-goodness Bond villain when writing a coin blog but then again, what am I saying? I’m writing about coins, for goodness sake. The coin industry has never lacked for colorful personalities.

Who or What Is Engelhard?

If you’re not familiar with the name, Engelhard Corporation was an American chemical company that produced gold and silver bars and rounds. My “Profiles in Bullion” series has been going further and further back in time but since Engelhard is (was) an American concern, it’s almost automatically out of the running for the title of the oldest company still making precious metal bullion products.

Besides, it’d be hard to beat The Royal Mint, whose documented history (it’s probably much, much older) goes back to 886 CE. Monnaie de Paris can do it, but merely talking about old mints isn’t my goal. I want to help readers learn about the players in the bullion industry and hopefully do it in an entertaining way. At the same time, I’m learning a few things myself, so I reserve the right to jump around a bit.

In that year, a German fellow by the name of Charles W. Engelhard traveled to New York. He was working as an agent of the German chemical and refinery giant Heraeus. As a matter of fact, Charles was the son-in-law of Dr. Wilhelm Heraeus, so Engelhard was well-connected in the business from the start (you may remember the Heraeus name from my earlier piece on PAMP Suisse).

Being an ambitious and energetic man, even in his middle age, Engelhard began piecing together the entity known by his name out of smaller companies in the Newark, New Jersey area. His first purchase was the Charles F. Croselmire Company, a platinum fabricator, and after its acquisition, Engelhard formed the American Platinum Works in 1903. The following year saw the purchase of another platinum firm, Baker & Company. In 1905, Engelhard set up the Hanovia Chemical and Manufacturing Company. By the time he died in 1950, Charles Engelhard had built one of the largest (if not the largest) producers of precious metals in the world. After his father’s death, Charles Engelhard, Jr. (who had inherited the company) began to apply his own intelligence and energy to the advancement of the company. By the late 1950s, Engelhard Industries was a publicly-traded company.

EMCC was a bit of a different beast than Engelhard’s father had established. For one, it was divided into three separate business arms: the Engelhard side handled precious metals; Minerals & Chemicals handled chemicals and non-metallic minerals; and Philipp Brothers handled the trading of raw ore on the open market (presumably the ore that the other two branches of the company handled).

Now, even though Philipp may have disappeared from the larger company’s name, it generated the most revenue. With the modernization of the bullion and precious metals market that was taking place around the globe in the 1970s, by the early ‘80s, Philipp Brothers represented almost 90% of the company’s profit. In 1981, it was spun off into its own company, which was eventually renamed Phibro.

The rest of the company became Engelhard Corporation. And lest you think it was some pale and paltry thing compared to the vibrant trading company it had just diverged from, the precious metals and chemical side of things had scored some massive successes in the previous years. For example, Engelhard was the first company to put the catalytic converter for automobiles into standard production in 1973.

In 2006, the American Engelhard Corporation returned to the mothership so to speak, when German chemical company BASF bought it out for about $5 billion (if you’re of a certain age, you might be having a fit of nostalgia for the VHS era right now). Engelhard became BASF Catalysts, and five years ago became a fully-fledged part of the BASF Corporation.

Apparently, the jet-setting and globe-trotting Charles Engelhard, Jr. was the primary inspiration for Ian Fleming’s titular villain Auric Goldfinger. Though I wouldn’t take the analogy too seriously or too far.

Charles, Jr. was a citizen of the world. Born in New Jersey, he grew up in the United States, South Africa, and England. Engelhard graduated from Oxford AND Princeton but still fought in World War II as a bomber pilot. He married Jane Reiss, the beautiful and fashionable daughter of a Brazilian diplomat, in 1947. They raised their five daughters on a lush, almost 200-acre estate in New Jersey. The power couple was active players in American high society and mid-20th century Democratic party politics. The Engelhards were avid art collectors and breeders of thoroughbred racehorses. One of the Engelhards’ thoroughbreds (Nijinsky, named for the famed Russian modernist dancer) won the English Triple Crown in 1970.

So totally a Bond villain. I’m getting to that.

Starting around this time, Engelhard established business stakes in South Africa, to the extent that the Engelhard family maintained two homes in the country and became important participants in South African high society as well. Engelhard partnered with Harry Oppenheimer, the head of the Anglo-American Corporation, and DeBeers, the famous diamond company, in the development of South African mining interests. Because South African law made it extraordinarily difficult to export gold bullion, Engelhard formed another company, the Development and Investment Company of South Africa, that took the gold that his mines were producing and fashioned decorative and religious artworks out of it. These items were then shipped out of the country, melted, and recast into bullion.

Ian Fleming’s grandfather was one of the bankers responsible for helping get Engelhard’s new business off the ground. Fleming and Engelhard got to know each other through this enterprise.

Gert Fröbe, the German actor who played Auric Goldfinger in the 1964 United Artists movie, even bears a superficial resemblance to Engelhard.

Charles Engelhard, Jr. died in Florida in 1971. His funeral was attended by American presidents and senators, and other leaders of the global economy.

But beyond the fascinating and well-lived life of its chief mover and shaker, the Engelhard Company is best known for its precious metals bullion products.

One interesting aspect of gold and silver bullion collecting in general is the fact that most bars and ingots were made with the investor or chemical and industrial use in mind. Therefore, older bars and ingots have a sort of no-frills, “name, rank and serial number” approach to them. Often one side (the reverse) is left entirely blank. Yet over time, people have come to love and covet these items the same way they might desire the perfect specimen from the height of classic United States coin art.

Some older coins are the same way. I’ve always wondered if being self-conscious about coin production and coin art has ruined the fun, but I digress…

Several weights and varieties of silver bars and ingots have been produced over the years. This includes early extruded pieces meant for industrial use that are therefore increasingly rare from a collector’s perspective. Frequently, the company would manufacture branded bars for other firms (such as ScotiaMocatta), or would brand bars in different ways according to which branch of the company made them.

Starting in the early 1980s (when the Engelhard Corporation split off from the trading firm), Engelhard bars began to feature a repeated Engelhard logo pattern on the previously blank reverse. The relatively well-known Engelhard Minerals & Chemicals globe logo also appeared on the obverse.

Also in the early 1980s, the company began to produce commemorative bars, featuring athletic vignettes and the Statue of Liberty (“Art Bars”).

Various weights have been produced, ranging from 1 oz to 100 oz. A similar situation as described in the preceding paragraphs exists for Engelhard’s gold and platinum bars as well.

Perhaps most importantly, Engelhard precious metal bars, rounds, and ingots enjoy a reputation for the highest quality and standards around the world.