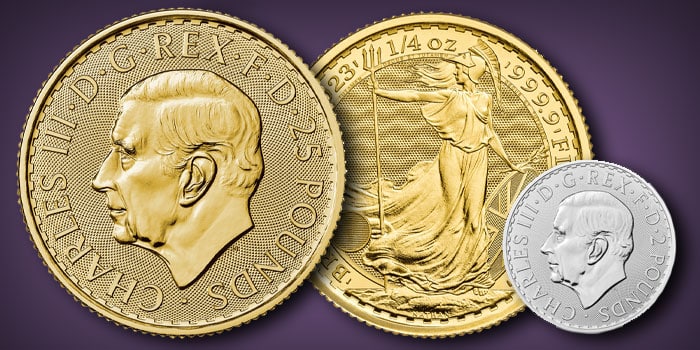 The Royal Mint is the first Mint in the world to introduce King Charles III’s official portrait onto bullion coins, with His Majesty’s effigy appearing on the world’s most visually secure bullion coin, Britannia, first.

Following the introduction of four innovative security features onto The Royal Mint’s bullion Britannia coin in 2021, its appeal and demand globally have soared. Due to their legal tender status, Britannia coins are exempt from Capital Gains Tax (CGT) for UK residents, regardless of the number of coins that are accumulated. Furthermore, gold Britannia bullion – in the form of both coins and bars – is also VAT-free.

“The Britannia bullion coin is globally recognized across the world by investors. Its reputation as the world’s most visually secure bullion coin has led to it becoming one of the most popular bullion coins produced by The Royal Mint.

While the design of the bullion Britannia coin remains consistent, the 2023-dated edition begins a new chapter for Royal Mint bullion coins, as His Majesty The King’s portrait appears for the very first time. Bullion coins are an attractive option for many investors looking to diversify their investment portfolio due to their value, tradability, and liquidity as well as CGT exemption in the UK. Each bullion coin produced by The Royal Mint is a combination of exceptional design, craftsmanship, and the latest innovation upholding the standards of quality and accuracy that you’d expect from a world-leading mint.”

This year, The Royal Mint’s 2023-dated bullion coin continues to lead on innovation, showcasing the ground-breaking security features that make it the most visually secure coin in the world. These features include a latent image, surface animation, tincture lines, and micro-text.

Struck in 999.9 fine gold and enhanced with four security features, the Britannia design is as beautiful as ever on this bullion coin. In the lower left-hand of the design, below Britannia’s flowing gown, a trident represents her naval history and as the viewer changes their perspective this trident becomes a padlock, emphasising the coin’s secure nature. Surface animation reflects the movement of waves and fine details such as the Union flag on Britannia’s shield have been carefully highlighted in the coin’s bullion finish. These added security features both decorate and protect the coin, just as the micro-text that borders the design states – ‘Decus et Tutamen’, which translates as ‘An ornament and a safeguard’.