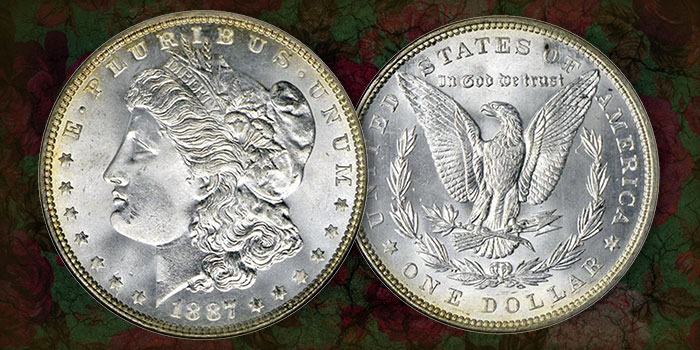 Morgan dollar production continued at its Congressionally mandated pace in 1887, despite the fact that even 10 years into the series’ run it had failed to gain a meaningful place as a circulating coin for most Americans.

Morgan was born in England and began working for the Mint soon after his arrival in the U.S. in 1876. He was brought on as an assistant engraver in October 1876 and then worked under William Barber. In addition to the Liberty Head dollar, Morgan has several coin design credits to his name, including the Columbian half dollar of 1892 and 1893 and an array of pattern coins designed in the latter half of the 19th century – perhaps most notably the never-released $100 Gold Union coin.

In Choice Uncirculated condition (MS63), the 1887 Morgan is slightly more common than the 1887-O and the 1887-S, but all three issues are affordable at this grade. For those interested in a superb Gem dollar for this date, the 1887 Philadelphia strike is likely the only viable option as the O-Mint and S-Mint 1887 dollars are both rare in grades over MS65.

In terms of strike quality, the 1887 is similar to the Philadelphia strikes of 1886. However, specialist collectors will note that 1887 issues often appear softer struck than their 1886 counterparts. This is not uniform throughout the issue but is a factor that collectors should pay attention to when seeking out a specimen for their collection.

The 1887 Morgan Dollar in Today’s Market

The specimen pictured at the top of this profile is one of seven 1887 Morgan dollars graded MS68 by Numismatic Guaranty Corporation (NGC). At the time the coin was sold by Stack’s Bowers in 2008, it was but one of two graded at this level and it sold for $32,200. That same coin brought $13,800 at a 2019 Heritage auction. Such is the risk that conditional rarities pose in the marketplace. If populations go up–as they have for this issue–prices usually go down as the top end of the market gains its equilibrium.

One way a collector might predict the impact of population gains at the upper end is to evaluate the coins that are held by the top-tier Set Registry participants. If the best coins are not held in a Set Registry leading set or its nearest competitors, one can take away that the best coins of that issue are not being held by publicly-revealed competitive sets. If there are only a few publicly revealed competitive sets that include coins at or near the pricing level of a top pop coin with a low population, then one must consider that the collectors that own the sets at the tier below may not have the means or interest in paying the premium for “finest known” coins.

This is vitally important information for someone making purchasing decisions based on an “investor” mindset. If, however, the goal is to have beautiful coins for beauty’s sake, or historic coin’s for history’s sake, then the coin’s position in the market will be determined by the degree to which there is competition for it.

This is only part of the story of the 1887 Morgan dollar at the very top of the market. Another narrative emerges once we drop down a half grade and look at the 1887 Morgan dollar in the MS67 and MS67+ band. What is clear at this level is that the common date Morgan yields a variety of extremely high-quality Superb Gem coins that are sure to appeal to collectors that appreciate early die state coins, Prooflike coins, brilliant silvery coins, and attractively-toned coins.

As beauty is often “in the eye of the beholder”, the degree to which the 1887 Morgan dollar allows for collector specificity makes these grades attractive to a wide range of collectors. As such, price levels here vary from $3,800 on the lower end to $6,500 or more for the “right” coin.

Gem-quality coins at the MS65 and MS66 level open the issue up to a broad swath of type set and Morgan dollar set builders. As is the case with the Superb Gem 1887 Morgans, at MS65 and MS66, a wide range of options exist. With 50,000 coins graded at the MS65 level at PCGS and NGC combined, there are enough coins to satisfy current levels of demand. MS66 coins are more exclusive, but with a combined pop of over 7,000 coins, a collector with a budget of $300 to $400 can land on an attractive example within a month or two of entering the market.

Collectors operating on a budget should eschew examples graded under MS64. An MS64 example carries a retail price of about $65. Of course, variety collectors may find grade a secondary concern. For VAM hunters, the 1887 issue yields more than a dozen collectible varieties, some of which are quite striking. VAM 1A features a distinct die break at the bottom curve of the D that forms a “Donkey Tail“. VAM 2 is a naked-eye-visible overdate where the remnants of the digit “6” are visible under the final digit of the date. And so on.

The obverse of the 1887 Morgan dollar exhibits the characteristic left-facing Liberty Head motif seen on all issues of this classic dollar series. The central Liberty bust wears a Phrygian cap encircled with a ribbon adorned with the inscription LIBERTY. Miss Liberty also wears a “vegetal” crown of wheat and cotton, which were two of the nation’s most lucrative natural agricultural assets in the 19th century.

Morgan designed the Liberty head bust after the likeness of Anna Willess Williams, a Philadelphia schoolteacher who modeled for the coin. Williams received significant public recognition after her face appeared on the Morgan dollar, but she rejected the attention that was heaped upon her. She refused offers for acting roles and apparently had turned down an offer for marriage following her engagement to an unknown suitor. Before dying at the age of 68 in 1926, Williams, who sat for Morgan on the sworn condition of anonymity, rebuffed her single stint as a coin design model as little more than an “incident of [her] youth.” The reverse of the 1887 Morgan dollar is dominated by a heraldic eagle, its wings spread across the upper half of the coin. Between the upper tips of the eagle’s wings appears the national motto IN GOD WE TRUST. The eagle clutches an olive branch in its right claw representing peace and in its left claw are three arrows symbolizing the nation’s ability to defend itself. The central eagle design is partly encircled by a laurel wreath.

Along the rim of the upper two-thirds of the reverse is the legend UNITED STATES OF AMERICA, with the tip of the eagle’s left wing (which virtually touches the coin’s rim) penetrating the space between UNITED and STATES; the right wing visually divides the words OF and AMERICA. The words ONE DOLLAR, seen at the bottom center of the reverse, are flanked by a single, six-sided star on either side of the denomination inscription.

The edge of the 1887 Morgan dollar is reeded.

Engraver George T. Morgan was born in Birmingham, England in 1845. He emigrated to the United States and began work as an assistant to Mint Chief Engraver William Barber and continued to produce patterns and commemoratives under the administration of Barber’s son, Charles. Morgan himself became Chief Engraver in 1917. George Morgan died in 1925.