Even though the United States had no real need for a large dollar coin at the start of the 1970s, the gaming industry developed an acute need to find a replacement for the silver dollars it used to feed tens of thousands of slot machines. This “need”, and the recent passing of beloved war-hero-turned-President Dwight D. Eisenhower, presented Congress with an opportunity to cater to the needs of the industry.

While United States Mint Director Mary Brooks lobbied for the coin to be struck in silver, Congress instead chose to strike the coin for circulation in the same copper-nickel (Cu-Ni) clad composition in use for the dime and quarter dollar. In a compromise, silver-clad versions were authorized to be struck and sold to collectors.

Signed into law by President Richard M. Nixon (formerly the late Eisenhower’s Vice President) on December 31, 1970, the Bank Holding Company Act Amendments of 1970 authorized the production of the coin.

First-year production totals were large (47,799,000 for business strikes from the Philadelphia Mint and 68,587,424 from Denver) but paled when compared to the mintage of the 1971 Kennedy half dollar, which was struck in Cu-Ni clad for the first time this same year. While hundreds of millions of Eisenhower dollars were struck, with many millions entering circulation, the coin proved to be more of a novelty item than actually useful for the purposes of commerce. The year 1978 saw the Eisenhower dollar, short-lived though it was, come to a close. On October 10, President Jimmy Carter signed into law legislation authorizing the production of a new smaller dollar coin measuring 26.5mm and weighing 8.1 grams made of the same Cu-Ni clad composition that had been put into use for dimes and quarters since 1965 and was used for the larger circulating Eisenhower dollar coins. Production of the new smaller dollar coin began on December 13, 1978.

Before this transition to a new smaller dollar coin got underway, however, the Philadelphia, Denver, and San Francisco Mints struck the Eisenhower dollar for one final year. The Philadelphia and Denver Mints struck Cu-Ni clad versions for circulation, while the San Francisco branch struck Cu-Ni clad Proofs. The Denver Mint’s output of 33,012,890 pieces was the highest mintage for the year and represents an end of an era for the Denver Mint’s production of the circulating large-format dollar coin.

In Mint State 65, the 1978-D carries a price of about $18 according to CoinWeek IQ’s current market analytics. This low price does not reflect the difficulty in cherrypicking Gem-quality Eisenhower dollars of this issue in the wild. Mint Set coins tend to have the best strikes, but this is a trend and not a rule. A large quantity of 1978-D dollars were found among the 223,000 coin Eisenhower dollar hoard marketed by Littleton Coin Company in 2011 and dubbed “The Big Sky Hoard” because it was discovered in a Montana bank vault.

Denver Mint coins were struck better than those struck at Philadelphia and finding Gem-quality 1978-D Ike dollars with nice eye appeal is not so difficult as to assert such a premium… at least not at MS66. Advancing to MS67 is another story. In MS67, PCGS boasts a certified population of just four examples, the last one selling in 2017 for $7,050. That example was not the finest of the four known, based on our observation of coins in the finest Eisenhower dollar registry sets.

Frank Gasparro’s portrait of Dwight D. Eisenhower (as President); Eisenhower facing to the left. Gasparro’s initials “FG” appear raised in the bust truncation. Beneath Eisenhower’s chin, to the left, is the motto “IN GOD WE TRUST” LIBERTY wraps around the top of the coin in the space between the rim and the top of Eisenhower’s head. The date wraps around the bottom of the design, between the rim and the bottom of Eisenhower’s bust truncation. While Philadelphia-struck pieces bear no mintmark, coins struck at Denver and San Francisco will bear small mintmarks of “D” or “S” above the space between the last two digits of the date. On Eisenhower dollars, mintmarks were hand-punched and may vary in exact location and orientation. 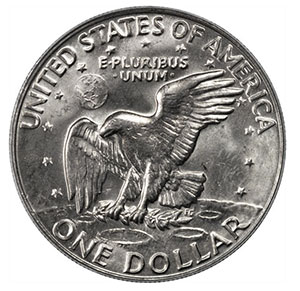 The edge of the 1978-D Eisenhower dollar is reeded.