While the “Bugs Bunny” Franklin half dollar captures the whimsy of the series enthusiast, the most popular variety of this mid-century coin is a Proof doubled die from 1961. The 1961 Proof Doubled Die Reverse Franklin half dollar exhibits a degree of doubling reserved for some of the most sought-after and valuable doubled dies in the entire catalog of U.S. coins. 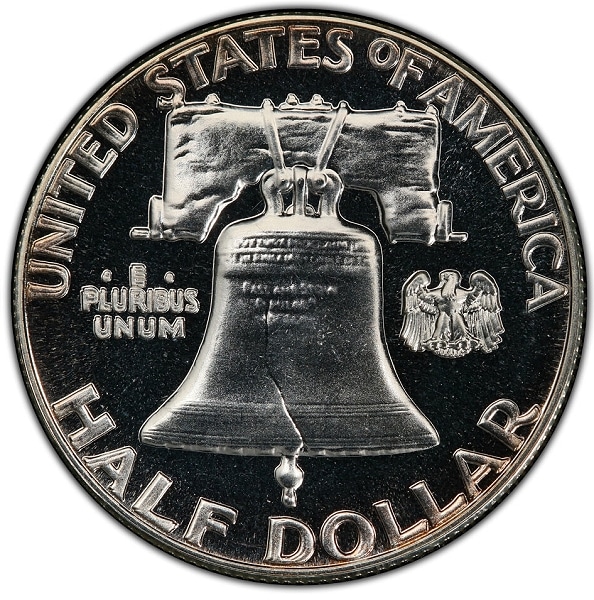 There are several kinds of 1961 Doubled Die Reverse Franklin half dollar, though the most desirable and valuable of these exhibits strong doubling in the reverse inscriptions “E PLURIBUS UNUM,” “UNITED STATES,” and “HALF DOLLAR.” The spread between the primary and doubled lettering is discernible even by the naked eye. Strong doubling on the 1961 Doubled Die Reverse Franklin Half Dollar

PCGS estimates that slightly better than 1,000 examples may exist across all grades, and prices subsequently start at a lofty $450 USD in PR60. Prices only go up from there, and an example in PR65 sets collectors back some $3,250. Those who angle for intense competition on the PCGS Set Registry will consider buying PR66 or PR67 specimens, which trade for $4,500 and $5,750, respectively.

Among Cameos, just about 20 are estimated to exist, and PCGS has certified about a half dozen of these, with the finest graded PCGS PR67; none are known in Deep Cameo (DCAM). The Cameo record goes to a PCGS PR66+ example that was sold by Heritage Auctions for $14,100 in 2016. Only two are presently known in the top grade of PCGS PR68, and one of these hammered for $15,000 in a 2020 Stack’s Bowers Galleries auction.