A group of 128 rare Massachusetts Colonial coins, nearly all certified by Numismatic Guaranty Company (NGC), has realized over $2.9 million in a Heritage Auctions sale. Averaging an astounding $23,000 apiece, the coins from the collection of numismatic researcher Christopher J. Salmon were offered on August 22, 2022.

The top lot was a 1652 Willow Tree Sixpence graded NGC AU 55 (lot 3250) that realized $312,000. These silver coins from the Massachusetts Bay Colony were among the first to be minted in British America. This particular coin is also pedigreed to the Garrett Collection. 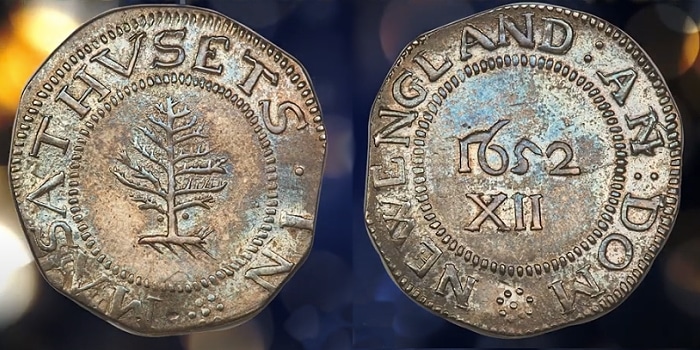 The Willow Tree coins replaced the initial series, known for the “NE” design element that is short for “New England”. The other side of these coins displays a Roman numeral to denote the denomination: XII represents a shilling, which is the equivalent of 12 pence.

The initial “NE” series was seen as vulnerable to clipping and counterfeiting and was quickly phased out. The auction included six examples of “NE” Shillings – including one graded NGC VF 35 (lot 3238) that realized $204,000 and another graded NGC XF 45 (lot 3239) that realized $192,000.

This is the first of three Heritage sales this year featuring selections from the Salmon Collection. Salmon is the author of Silver Coins of Massachusetts: Classification, Minting Technique, Atlas, the definitive work on these historic coins. The reference book includes an effective and flexible system to classify their varieties.

NGC is showcasing over 350 coins that it certified from the Salmon Collection in an image gallery on its website. The coins are sortable by variety and include their catalog number, offering the coin collecting community a comprehensive research tool for Massachusetts Colonial coinage.

To explore the gallery, go to NGCcoin.com/Salmon.

Other highlights from the Salmon Collection in the auction included: