The initial wave of fakes that I found (I recorded 13 different sellers during an approximately two-month time frame) were all labeled with certification number 27886283. After posting and reporting this initial wave of fakes, PCGS nuked that cert: Posting these in a couple of other forums lead to a discussion on Coin Community from 2018 on raw fake 1881-CC Morgan dollars with the same wrong reverse for the date as some other dates–another “family” of counterfeits.

Images included these two, with a couple of pick-up points for the fakes: Of course, one of the best “tells” is that the 1881-CC reverse does NOT match known genuine examples and varieties (VAMs): Comparing images of the genuine example to the counterfeit, one can readily pick out some of the differences. But I am not going to embellish that here for obvious reasons; I’m looking to help the hobby, not the counterfeiters, which is always the double-edged sword to these types of articles. 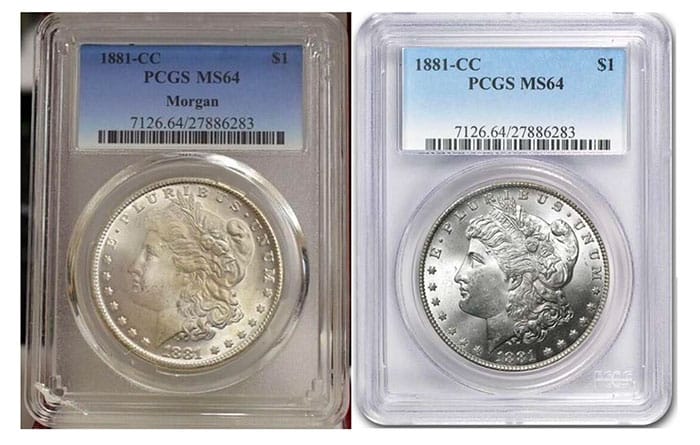 And this is a dynamic situation, as after the close of this cert, other examples hit the internet with different cert numbers. Some are laughable when you look up the certs (such as the next one listed). Many have no images on the online certs to use as reference, but some do have an auction history listed for past sales and available images on the auction site (like Heritage, etc.). And the auction site: And one seller stated that he had 19 different; I haven’t taken the time to review all of these cert numbers in relation to the genuine ones – maybe a reader could give it a whirl! Probably the inspiration for these is a genuine MS64 1921 Morgan; “Morgan” was added to the label by PCGS to differentiate from the 1921 Peace dollars (genuine first, counterfeit next). 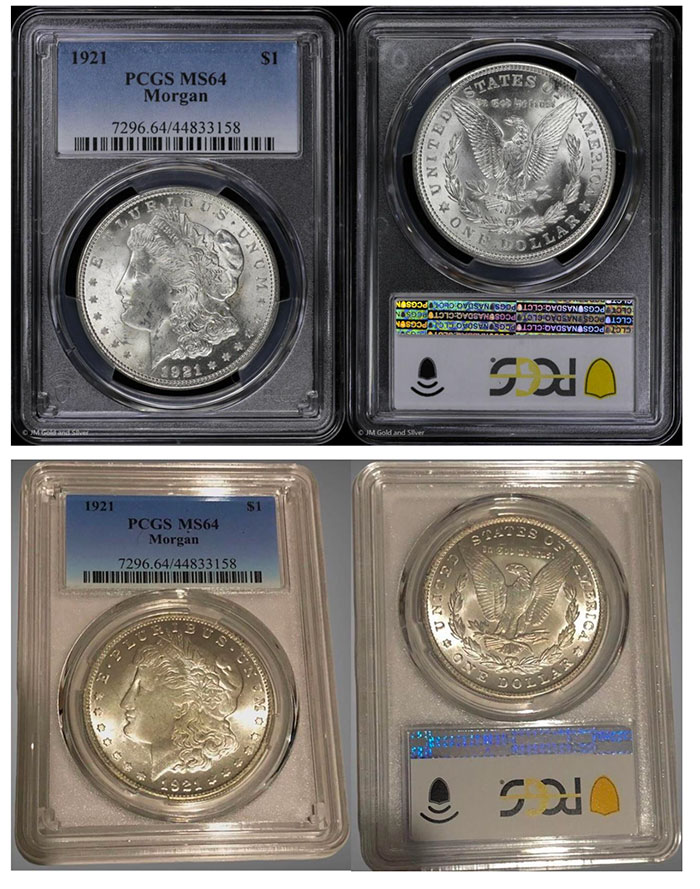 And one enterprising seller decided to break them out of the fake holders and sell them as money clips at $150 a pop! The online cert again had no image, but it did have a link for a previous auction; the seller also had an 1883-CC counterfeit as a money clip, which highlighted another unrelated counterfeit out there.

As I told others, I’m glad I don’t collect Morgans right now! With this onslaught of fakes, collectors need to be on their toes and evaluate the coin first, and the holder next… Remember, it’s a GROWING jungle out there!

PS – As always, the research and summary articles continue to be a collaborative effort with many Facebook “Dark Side” friends participating and contributing.