A comment I have heard in regards to these latest struck fakes is that the counterfeiters do not copy low-grade or common coins; the subject of this latest article begs to differ and I titled my previous Colonial Coin Collectors Club (C4) News Letter article “A Story of a Curious “4-C Massachusetts 1⁄2 Cent”. This article is intended as another installment disclosing discovered current deceptive struck counterfeits and establishing one-page attribution guides for each; the research continues to be a collaborative effort with many participating numismatic clubs, Facebook “Dark Side” members and other friends participating.

After seeing this “coin” listed for auction on the Internet by one of members of the same group of apparently connected sellers I monitor I immediately turned my “suspicious eye” on it; starting with the third-party grading certification I became even more suspicious of this one, as the online cert verification stated “Grade: CONTACT CUSTOMER SERVICE”. I pulled the pics from the listing and emailed them to several C4/EAC folks I know for their opinions, as this was my first look at a Massachusetts copper. The results drove more questions, as the pics weren’t great and the “coin” wasn’t in-hand but everyone who reviewed it stated concerns about its possible authenticity; another consideration was the possibility it was an unknown die state/variety, so how cool would that be?

Biting the bullet, I decided to “win” the auction (for an undisclosed embarrassing price) and turn this research article into another personal learning experience thanks to the help of several “copper friends”.

One of the initial steps I take in investigating an interesting “coin” is to compare it to images of a known genuine example. There are many outstanding coin related web sites to use as resources to this end (auction houses, TPG sites, etc.). In this case I found a similar example of the same variety on Heritage Auction’s website and created the comparison images as follows: The red circles highlight areas of differences between these two examples. From this review it became more apparent how to search for other ones, concentrating on the differences to a known one AND the apparent damage noted at the lower eagle/date area of the suspect one. 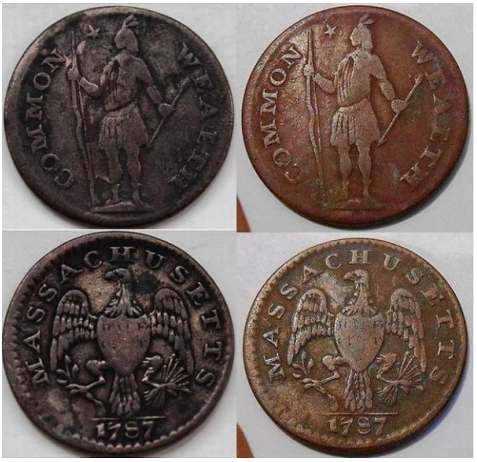 Note the longer bow, “reworked” die break, and the same reverse “damage”, the ding on the first “7”, flattening of the lower branch and notch in the tail feather over “8” of these examples.

Since my C4NL article ran last fall we have found two more examples of this one; the first in December 2016 was encapsulated by one of the TPGs, the second example was listed on the Internet in June 2017 and was raw. That makes the current count seven documented examples – with no way to know how many more are actually “out there”!