A follow up to the 1927-S Liberty Standing Quarter article in this continuing series on deceptive struck counterfeits, this research article on another “quarter” features the 1854 Huge O Liberty Seated variety. Documented examples to date include two TPG-reviewed specimens, with the presumed genuine repaired source example selling on the internet twice: once by one of the documented bad sellers from our initial involvement in the fall of 2015, and a second time a year later to the author. Unlike many of the documented varieties, this one has yielded only three suspect examples through extensive research.

Continuing to follow-up on silver coinage casualties of this latest wave of deceptive counterfeits, we move towards where the research leads us and another key “variety”, the Liberty Seated 1854 Huge O quarter. Unlike many of the varieties we have chased to date, this one was not part of the initial group of TPG-submitted coins but found instead in a group of internet listings by one of the documented bad sellers we watched in that venue.

Like the 1927-S, this variety was included in our initial CoinWeek article From the Brink to the ‘Dark-Side’, and also started with the purchase of a damaged genuine coin that was repaired and used to make the counterfeit dies. And like others in this series, the repairs were accomplished with apparent skill until compared to images of known genuine examples; then the affected details betray the efforts of the counterfeiters.

If there were but one known example, then it might simply look like a repaired and tooled genuine coin. But when we can document more than one with the same key differences (plus additional “circulation marks”), we know we are on the trail of the counterfeits!

The original “discovery example” is still in the TPG holder as seen in the images and was initially considered suspicious at best due to the seller’s reputation. The holder’s label accurately described the coin as tooled, and comparison images between it and a known genuine example show the extent of the effort.

Additional comparison images of these two show the obvious areas of repair and highlight the areas expected to differ from a genuine example while matching any other struck examples.

In keeping with several of the “coins” researched in this series, the areas of damage and repair suggest a probable hole repair!

And as has happened in previously researched varieties, the second suspect example appeared in a few days of internet searching. Having images of the damaged and repaired example certainly helped to focus the search.

This example was TPG-slabbed and shown as being sold at auction in April of 2014; comparison images show the common areas of damage as well as common identifying circulation marks (“sister marks”) between these two.

So, at this point we have only matched the original source coin with the apparent repaired example, so technically no counterfeit here (although the purists might argue the point). From here the search was on for additional examples, initially focusing on known “bad” internet sellers.

Three additional examples turned up; the second TPG example showed up in an unexpected place, but that’s another story…

As noted in previous research articles on this subject, a timeline proved helpful in trying to piece together the history of these and discern duplicate examples:

Matching sister marks and repaired areas are noted in white circles. As with the others previously researched and reviewed, the main attribution marks match exactly from the source coin to each of the struck clones.

And the next two raw examples came from known/watched internet sellers, again matching the initial examples defect by defect. 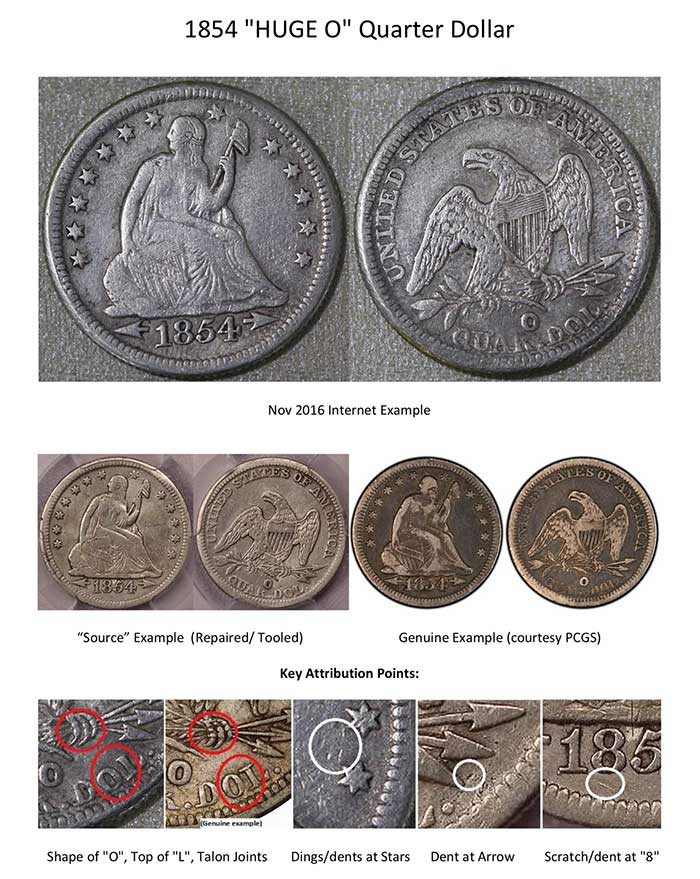 As always we can all draw our own conclusions about what is real or what is “Memorex”, but I am convinced more than one of these is counterfeit! I would ask that the reader be on the lookout for other duplicate examples and REPORT them; with only three examples known to date beyond the possible source coin, the chance is high there are more “out there”!

Additional research articles/attribution pages are in process as the growing team of watchers/researchers on our FaceBook page “Dark Side” (now over 500 Members!!!) continues to be vigilant in the search for these current deceptive threats.

And as always, the research continues to be a collaborative effort with many EAC members and “Dark Side” friends participating.