As introduction, a member of Early American Coppers (EAC) posted on the club’s Facebook page “Dark Side”, a fake 1796 “S-85” that he astutely identified from a recent internet listing, and as follow-up to that discussion I was able to post images of the discovered source coin apparently used to create the dies and the following struck “clones”.

In that ensuing discussion I stated it is interesting how our research has evolved and paradigms have shifted through time; the first time I saw a “repaired” source coin was from the research of the fake 1793 “S-5” wreaths (Penny-Wise, July 2016). That opened my eyes to look for more, to the point I now look for severely damaged/ holed examples- explains the odd lettering and spacing we see on many of these! As always, the research continues to be a collaborative effort with many participating EAC members and friends participating.

I have previously reported on the status of the continuing research efforts to find and report as many of the current deceptive early copper struck counterfeits as possible through the efforts of many dedicated EAC members and non-members. As part of this effort it is an equal challenge to discover the probable “source” examples used to develop the dies to strike these fakes. Through this article I intend to develop an image reference for the damaged and then (in most cases) skillfully repaired examples, as well as a known struck “clone” example to show the progression of the apparent process the counterfeiters are using.

A side benefit of this analysis is it has certainly refined my search parameters, both for investigating possible source coins and also for actual additional struck fakes “out there”!

And so, in no structured order, I will start with the 1793 “S-5”, the first variety we saw and acknowledged with a repaired genuine example used to start the process. I will then show a couple of silver pieces and end with the variety that first got us involved in the chase in late 2015.

This one had much of the “dig” on the face repaired but left several other prominent digs alone; comments to the original Facebook post discussed the skill apparently used in the repairs.

This one had superficial repairs made to the obvious scratches but left a strange appearance at the die break at the date (“1”).

Major repair to this one! One of three holed source coins discovered to date.

Another majorly holed source coin; this one was slabbed and sold twice after the dies were completed for the coining of the fakes; I actually own the source, currently in a TPG holder.

Holed again, this is the latest date we have encountered from this series of Struck Counterfeits fakes; the resulting “visor head” makes these rather easy to spot.

In the fall of 2015 a fellow EAC member alerted the Copper Notes group to an apparent fake 1798 large cent, changing how many of us view the hobby going forward! From the discussions this prompted in that forum and the following Penny-Wise articles, we suddenly became aware of a new level of “ struck counterfeits ” (actually I’ve been told the correct term is fake, replica, etc., since early copper isn’t “current currency”) so genuine-appearing that this one and ultimately many others were in TPG holders. This example, a supposed “S-158” appeared to be a new variety–an “improbable die state” as another respected long-time EAC member noted–or in fact a fake.

The “Y” in LIBERTY was too long for any known 1798 large cent, the reverse die break was partially tooled away as not seen for this variety before, and there was a series of blemishes including “dimples” on the bust as struck. The notice of this one opened the floodgate, as I found another example on the internet, then another member reported a third, and then a fourth appeared – eventually adding up to eight total currently documented Struck Counterfeits examples, all with common “dimples”, scratches and other circulation marks that just can’t be.

These blemishes are all in the dies, apparently, impressing these common identifiers on all examples Struck Counterfeits; individual pieces have other marks, damage and inflicted “weathering”, possibly to try and hide the truth, but a diligent eye can still help flush them out. 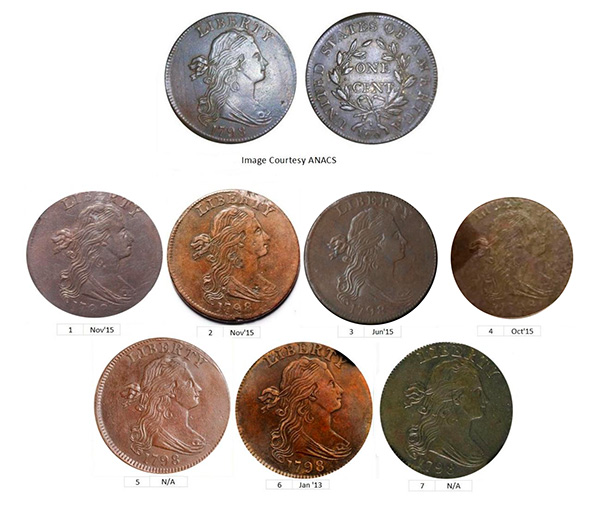 I hope this article is informative and gives a sense of what we as a hobby are facing; additional future articles are planned to present specific one-page “attribution guides” for the examples documented to date depending on interest. As we continue the research and hunt for additional examples we are continuing to develop a database and our efforts to “get the word out”.