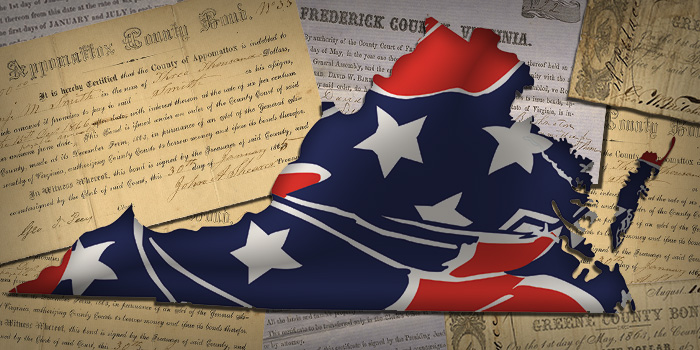 By R. Neil Hening and Robert W. Tharpe …..
Most of us are familiar with bonds issued by the Confederate government that were used to help fund the war and the government itself. Millions in bonds were authorized and they have been well-catalogued and published in Confederate and Southern States Bonds by Grover C. Criswell and Comprehensive Catalogue and History of Confederate Bonds by Douglas B. Ball.

But what about the home front?

Eighteen municipalities in Virginia, including some that would later leave Virginia in 1863, issued their own paper money. The legal authority for the notes was cited and carried the signature of local officials such as the Mayor, the Chamberlain, the Treasurer, the President of Council or Clerk of the Board. These notes were accepted for payment of town taxes, licenses, rent of city property, and debts due the city. Additionally 57 counties, again including some that would later leave Virginia in 1863, issued notes. These notes were signed by the Presiding Judge, the Clerk, the Treasurer or the Sheriff, and in most instances were receivable for local taxes. A complete listing of these notes and their denominations can be found in the Virginia Numismatic Association-sponsored publication Virginia Obsolete Paper Money by Richard Jones and Keith Littlefield.

However this is not the only type of the fiscal paper that local governments issued. Some counties issued their own bonds. [“Notes payable” are loans for small amounts, generally less than $100, while “bonds payable” are loans on a much larger scale. Bonds provide a fixed rate of interest, with the principle repaid by the end of the bond term, and with periodic interest payments, often accounted for by “clipping coupons” printed with the bond.] Unfortunately there is a paucity of information about collecting these interesting pieces of fiscal paper. Private Collectors -The largest group consisting of 12 bonds is in the hands of private collectors. Examples are Albemarle ($500), Appomattox ($3,000) and Page ($100) counties.

Local Histories – Information on bonds issued by Bath County ($500), Powhatan County ($50) and the City of Portsmouth ($100) are described in local histories.

Auction Catalogs – The evidence of local bonds issued by Chesterfield County (amount not known) and Henrico County ($3,000) is found in auction catalogues.

Coupons – Most bonds were paid off with the redemption of coupons on a semi-annual basis. Although the actual bonds have not been seen three counties have been identified as having issued bonds because of the existence of coupons. These include Bedford County (amount not known), Clarke County ($126) and Goochland County ($500 & $1,000). 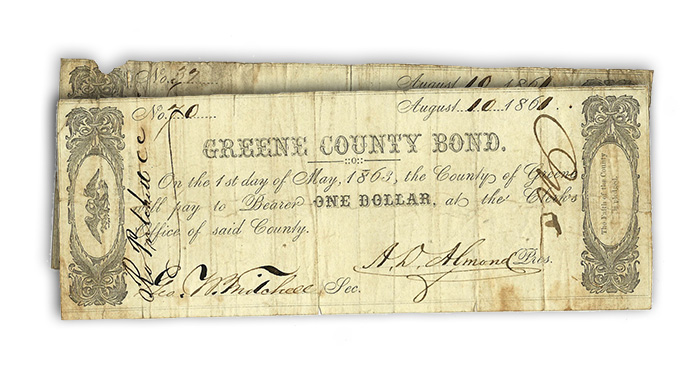 With the exceptions of Greene County ($1 & $2), King & Queen County ($100), Loudoun County ($100), Montgomery County ($1,000) and Page County ($100), all other bond denominations are hand written, which suggests that bonds could be procured for various denominations that suited the purchaser’s pocketbook. Since there is no evidence otherwise, it is also possible that these five counties issued bonds in additional pre-printed “fixed” amounts.

The Town of Fredericksburg issued pre–war bonds under an act of the State of Virginia dated March 18, 1855 and a local court order dated September 25, 1855. These bonds bore the denomination of $100 and were payable thru 1872. These were not coupon bonds but endorsements on the back of the bonds show that interest was paid during the Civil War years. Therefore they should be considered Civil War-era county bonds. A Virginia state law passed January 19, 1861 and an ordinance of the State Convention passed in May of that same year authorized local jurisdictions to make these issues. Perhaps if someone had the time they could survey the local county order books for these and other counties to discover the enabling ordinances that could tell us the authorized amount, the actual number of the bonds to be issued and their denominations.

The authors encourage other collectors and historians to contact them with any information they may have that will increase our pooled knowledge on this topic. They can be reached at rnhening at gmail.com or rwtharpe at comcast.net.