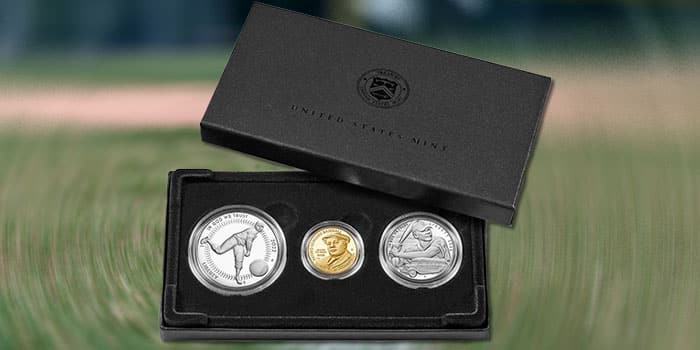 The United States Mint will accept orders for the 2022 Negro Leagues Baseball Commemorative Coins and Coin and Medal Sets beginning on January 6 at noon EDT. Production is limited to 50,000 gold coins, 400,000 silver dollars and clad half dollars, and 15,000 sets of the 2022 Proof Silver Dollar Coin and Jackie Robinson Silver Medal Set. The gold coin orders are limited to three pieces per household, while the three-coin set and the coin and medal set have a firm one set order limit. The obverse design features a portrait of Negro National League founder Rube Foster with his signature. Inscriptions are “NEGRO LEAGUES BASEBALL,” “IN GOD WE TRUST,” “2022,” and “LIBERTY.”

The reverse design depicts the gesture of tipping one’s cap, an important sign of respect for players. Inscriptions are “UNITED STATES OF AMERICA,” “THEIR LEGACY PLAYS ON,” “$5,” and “E PLURIBUS UNUM.” The design depicts a pitcher in mid-throw with the baseball in the foreground and baseball stitching as a border. Inscriptions are “IN GOD WE TRUST,” “2022,” and “LIBERTY.”

The design depicts a player’s eye view of a pitch being delivered to the catcher at the plate. Inscriptions are “UNITED STATES OF AMERICA,” “$1,” and “E PLURIBUS UNUM.” The design depicts a Negro Leagues tour bus that served as their home on the road when players were refused entry to hotels and restaurants. The batter exemplifies the determination to play the game he loves, regardless of challenging circumstances. Inscriptions are “IN GOD WE TRUST,” “LIBERTY,” “2022,” and “NEGRO LEAGUES BASEBALL.”

The design shows a group of five Negro Leagues Baseball players. Inscriptions are “E PLURIBUS UNUM,” “HALF DOLLAR,” and “UNITED STATES OF AMERICA.”