The 1972-D No FG Kennedy Half Dollar is one of the most important varieties for the series from the clad era, which began for this coin in 1971. Though most popular with series specialists, the Denver 1972 No FG Half Dollar is on the radars of even the more casual collectors and certainly those who are assembling a date-and-mintmark set. The PCGS Set Registry accommodates this variety in various assemblages, including the Kennedy Half Dollars With Major Varieties, Circulation Strikes (1964-Present).

The lack of “FG,” or the initials of Kennedy Half Dollar reverse designer Frank Gasparro, is a glaring and inadvertent omission stemming from die abrasions and /or overzealous die polishing. This prominent 1972-D variety isn’t the only No FG Kennedy Half Dollar – there are several kinds that collectors know about and probably others floating around yet undiscovered. However, the 1972-D No FG is the rarest of these known. 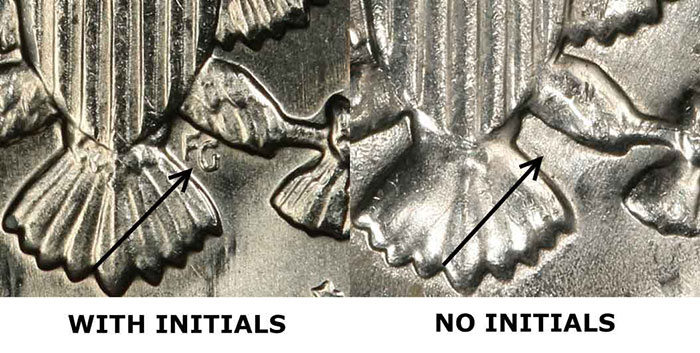 Attributing this coin is relatively easy for those with knowledge of what the reverse of a Kennedy Half Dollar is supposed to look like. The “FG” will be absent from its usual spot under the heraldic eagle’s left leg (the right leg to the viewer’s eye).

While the absence of the initials can be picked up by the naked eye, the use of a high-quality 5X or 10X magnifier is ideal – particularly for ruling out what may be a weak FG, which isn’t presently a recognized form of this variety. A 1972-D No FG Half Dollar should show no traces of Gasparro’s initials. Genuine No FG halves will also show weakness in other surrounding features, such as the eagle’s wing, stars, etc.

This is a coin that can be easily cherry-picked by keen-eyed collectors, and this extra bit of legwork is worth the effort. PCGS has graded a little more than 100 of these coins across all grades. That’s a tiny number for a modern coin and serves as further evidence of this variety’s tremendous rarity. A circulated example in XF-40 runs around $275, with uncirculated specimens starting in the neighborhood of $425 for an MS-60 specimen. Only a couple dozen of these coins reside in PCGS holders with Mint State grades, the finest a single specimen in MS-66. Values soar into the four figures for any specimens north of MS-62+.