Almost every year, the United States Mint releases certain products that sell out quickly, especially if they have limited mintages and are high-demand items like the special American Silver Eagles issued since 2006.

But this has been an unusual year — even compared to 2021, which saw a much higher-than-usual number of sellouts largely due to the rollout of the new reverses for American Silver and Gold Eagles and the release of new Morgan and Peace silver dollars.

This year, it seems almost every product is selling out quickly, from the silver military medals, the 2022-W Proof Silver Eagle, and almost every Proof version of the American Gold Eagle (the tenth-ounce Proof is on backorder), to products that do not normally sell out at all, let alone quickly, such as the quarter dollar and dollar products, including roll sets and bags.

Moreover, most of the American Women Quarters products sold out during the period when customers could enroll to receive them – something we have never seen before.

Coin Analyst Inquiry to the Mint

Your columnist recently contacted the Mint to request some clarification about this situation, sending officials there these questions: “There have been a lot of press reports and announcements from the Mint in recent months of U.S. Mint coins selling out sooner than expected, including but not limited to coins that sold out with enrollments in advance of their regular release.”

“While I am aware of the issue of silver planchet supply problems as well as the heightened demand for precious metals, some of these sellouts have left many collectors wondering why the Mint is unable to produce more coins. That is especially the case for programs like the clad American Women Quarters rolls, bags, and sets since there is not, as far as I am aware, a shortage of copper and nickel. Perhaps the issue there is the need to try to meet the higher demand for circulation coinage at a time when your minting facilities are still impacted by COVID?”

“Can the Mint provide some further details on what is causing so many sellouts this year; why many product limits such as for the quarters were set so low, especially for a new series that is likely to generate greater interest; and why it is not possible to produce more clad quarters if the demand is there as it appears to be?”

To address my questions, the Mint arranged a briefing with Kirk Gillis, Deputy Associate Director for Sales and Marketing, which occurred on April 26. Mr. Gillis has two decades’ experience working in marketing, business development, and e-commerce, including 12 years as a digital entrepreneur.

He began by discussing the recent spike in demand for Mint products, which he said was “clearly impacted by the COVID-19 pandemic and which has had increased demand for many discretionary spending products across the board, not just coins.” He added that while it is hard to quantify, “the release of the new eagle reverses and the Morgan and Peace dollars in 2021 have had a rejuvenating effect on numismatic coins in general.”

I asked if he could elaborate on the sources of the increased demand and what role COVID played, adding that the number of coin collectors overall is believed to have grown because collectors had more time and sometimes more money for hobbies during the pandemic. Gillis replied that he agreed with that assessment as a significant contributing factor, but that he personally believed the primary factor was “innovation in the product portfolio of 2020 and 2021.” 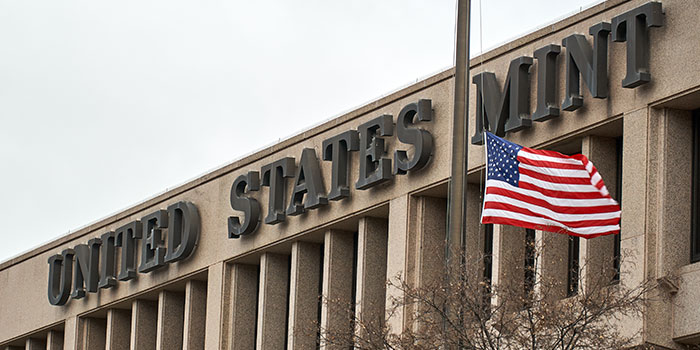 He added that he believes that the Morgan and Peace dollars were particularly important because they brought in lots of pre-existing Morgan and Peace collectors who normally only collect older American coins. Overall across all products, in 2021 the USM added 166,217 new customers (those who had never bought from the Mint before). Until just a few years ago, the U.S. Mint’s numismatic customer base had been slowly but steadily declining.

I followed up by mentioning that when some collectors hear such numbers on new customers, they ask how many customers the Mint lost that year. Mr. Gillis said it is not possible to quantify that since not all customers make purchases every year, which is why the Mint instead measures the overall size of the customer base each year. There will always be customer churn, and so long as customer growth exceeds losses, your base will grow.

He went on to explain that “the Mint’s product planning cycle is approximately two years out, making it very hard to respond to changing conditions such as the impact of the Morgan and Peace dollars and new eagles,” adding that although the Mint expected these products to do quite well, performance still outpaced expectations.

Another recent change at the Mint is related to marketing and which kind of customers the Mint is targeting in its marketing. Mr. Gillis noted that in the past the Mint “focused more on the core or avid collector, and less on customer acquisition.”

Recently, the Mint has focused much more on customer acquisition efforts, particularly in paid advertising, while the core collector audience is being more effectively nurtured through owned channels such as email and social media. As for the recent high number of sellouts, including for the American Women Quarters – Gillis said that the U.S. Mint had conducted market research of both existing customers and the general public, and demand was expected to remain relatively flat with the final years of the America the Beautiful Quarters program.

But then there was “a perfect storm of good things,” starting with developments such as Oprah Winfrey and many other influencers and media outlets celebrating the launch of the 2022 Maya Angelou quarter. This, combined with a different marketing approach designed to engage women in the product has caused demand to greatly exceed expectations.

According to Gillis, unlike previous quarter programs where advertising focused more on ‘collecting the coins,’ “the Mint advertised AWQ as an opportunity for role models to engage the young women in their lives in the stories of these trailblazing American women and what they represent. Combined with incredible media and influencer coverage, product sales blew away expected demand. All that publicity created widespread awareness of the program, which greatly enhanced paid advertising performance, and enabled the USM to engage a lot of women as first-time customers.

Mr. Gillis mentioned the website and software bot issues the Mint has encountered. Because inventory must be reserved sequentially, it is extremely difficult to deal with massive pulses in simultaneous demand with concurrent web sessions that rival the most sought-after video game releases and limited-edition designer sneakers. First, the Mint successfully blocked the bots and stabilized the e-commerce experience on the site.

But the long-term solution is more than just adding technological capacity. It is about having the ability to produce supply sufficient to meet demand and to enable mechanisms that normalize demand over a longer period of time and avoid funneling all that demand into a 20-minute drop window.

On the supply side, the Mint’s procurement team continues to work diligently to resolve the silver blank supply issue. The problem is particularly challenging due to the Mint’s quality standards that very few suppliers are able to meet. Although Gillis couldn’t confirm anything specific at this time, he said meaningful progress is being made.

In regards to normalizing demand over a longer period of time, “this is where the push towards enrollments comes into play,” he said. The Mint conducted significant communications across all channels to ensure customers understood that enrollments are the only way to guarantee they get an annual installment of their favorite products, that they can cancel their enrollment at any time, and that enrollments also provide free shipping.

“Response has been fantastic,” he said. He added that due to all of the efforts being made, the situation in 2022 has been considerably more stable and that they expect this trend to continue for the foreseeable future. He warned, however, that the two-year product planning cycle will continue to constrain the Mint’s ability to react quickly to changing market conditions.

I also brought up the issue of speculation that many people believe is playing a role in the recent sellouts of quarter dollar products that are normally not hot items, at least not since the State quarters. Moreover, if product limits are increased, that might then largely curtail that portion of the demand spike that was driven by speculators who at a certain point realize they aren’t likely to make money on those products in the future, which would then lead to a considerable decrease in sales if indeed speculation is a large component of the demand.

Mr. Gillis noted that the Mint did not see a lot of evidence that speculation played a meaningful role in the AWQ sellout, but that it is clear that speculation played a significant role in the American Eagle and Morgan and Peace silver dollar programs. “As long as a product is priced for significantly less than what the market will bear,” there will be meaningful incentives for speculation. In many ways that speculation is good for demand (and for numismatics overall), and the Mint pays a lot of attention to this issue. While raising prices would certainly dampen speculation, it would have a significant negative impact on the Mint’s ability to broadly engage the American public and ‘connect America through coins’. To address these issues the Mint is in the process of initiating studies of the secondary market, with the intent of identifying opportunities to achieve a mutually beneficial balance between direct-to-consumer and secondary market activity.