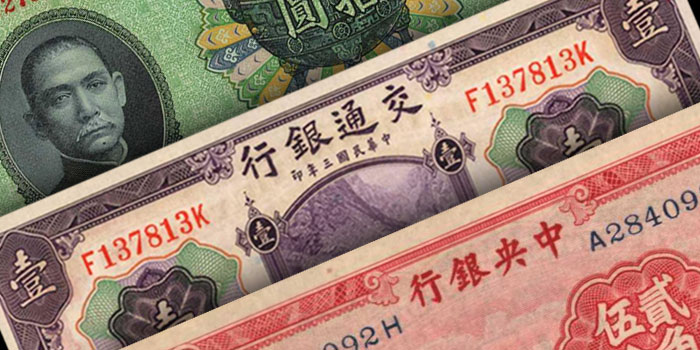 The year 1949 saw the culmination of the long, bloody Chinese civil war that had begun in 1927. That was when Chiang Kai-shek’s governing Republic forces initiated a purge of their opposition, the Chinese Communist Party, that was steadily gaining strength and followers. By the early 1930s, the Communists had re-grouped and gained control over large swaths of China. The Republic responded and by late 1934, was successful in isolating the remains of the Communist forces in Shensi Province.

Over several ensuing years the Communists gained momentum and expanded their territory. In order to finance the war, the ruling Nationalists turned to the printing press. Ultimately, the result was the destruction of the purchasing power of their currency, their economy, and the future of their followers.

In June 1937, one U.S. dollar would buy 3.7 yuan. The yuan quickly depreciated and by December 1941, one dollar was worth 18.9 yuan. At the end of 1945, it would take 1,220 yuan to purchase $1 USD. Finally, in May 1949, massive inflation had devastated the economy and disheartened the Nationalist army. Because of the incredible increase in the Chinese money supply, it would then require 23.3 million yuan to purchase one U.S. dollar.

By mid-1949 and after over 20 years of warfare, Chiang Kai-shek’s Republic forces were finally overwhelmed, and their leaders retreated to Taiwan. The new Communist government led by Mao Tse-tung had already begun issuing their own currency. For a brief time, the different currencies traded side by side. However, when the masses realized that the Communists were firmly in power and would not accept the Republic’s banknotes, the earlier notes BECAME WORTHLESS.

Literally overnight, billions of yuan that represented everyone’s wealth lost all their value. This devasted the populace. Wealthy individuals became paupers, and the poor became destitute.

China is credited with being the first country to issue paper currency. This is thought to have occurred around the seventh century CE. Then, in the mid-15th century, after the failure of a string of currencies issued by different emperors and governments, the public finally refused to accept paper money. They knew that a new currency would follow all the others, and eventually fail as well. Thus began four centuries during which paper money was abhorred, and various metals were used as money.

It is common throughout history for collectibles such as coins, currency, stamps, and antiques to rise in value according to the country’s underlying economy. A vibrant economic environment contributes greater wealth to its inhabitants. That is why the collectibles of Great Britain, Germany, and the United States are priced among the highest of any of the world’s nations.

China possesses the world’s largest population, and until recently the vast majority of that population lived in poverty. But during the past few decades not only has a large proportion of their populace joined the middle class with the increased wealth afforded by it, but many have also begun collecting important items from their nation’s past.

The more affluent a nation’s citizens become, and the more leisure time they have, the more wealth they typically direct towards obtaining coveted symbols of their country’s history. This drives up their prices. For China, it has likely only entered the early stages of this process.

About 10 years ago, I first investigated collecting and investing in Chinese paper money. I considered the three major periods: the Empire era (loosely pre-1912), the Republic of China (ROC) notes (1912-1949), and the People’s Republic of China (PRC) (1948-60) or early Communist era.

Empire notes were seldom encountered, and their prices were already prohibitive.

On the other hand, the PRC notes were widely collected by modern-day Chinese. They were available, but their prices reflected the large demand and seemed expensive.

Then I looked at the Republic of China notes.

When I compared the relative rarity and price of the People’s Republic with the Republic of China notes, I saw a glaring disparity. PRC notes of a similar rarity with Republic ones would sell for many multiples of the latter. In fact, some very rare Republic notes could often be bought for a few hundred dollars or less, if you could find them. I wondered why.

In talking with dealers and collectors I tried to understand why the earlier banknotes sold at such a discount to People’s Republic of China notes. I learned many Chinese nationals collect both eras. However, they have a propensity for collecting the early Communist notes. One reason is the series has a relatively small number of different banknotes. Thus, there was a great demand competing for a limited number of available issues. This accounted for their lofty prices.

The vast number (5,000+) of varieties of Republic notes seemed to be the major reason many people refrained from collecting them. But to me, this presented an opportunity! An individual can pick and choose from an enormous assortment of notes issued by the Central Banks, different cities or provinces, foreign banks and governments, various important enterprises, and even hundreds of private banks. Further, many banknotes display English text, which enhances their attraction to English-speaking collectors. One can focus and collect one or more areas if you choose. Or you can attempt to collect the entire universe of notes or build an impressive type set. The possibilities are there.

The designs of the Republic banknotes are extremely diverse. They range from the simplistic to the ornate, and from the drab to the delicately colorful. They portray significant people, places, events, and structures, and take the collector on a journey into the unfolding of Chinese history. In addition, collecting Republic notes offers not only a fantastic challenge, but you will also find its rich history is steeped in mystery.

The reason many ROC notes are so rare and unavailable is due to the wanton destruction of so many of them. This occurred after the Communists gained power and the Chinese public awakened to the horror that their money was worthless.

The fear, anger, frustration, betrayal, and loss that this realization engendered upon the Chinese masses grew like wildfire. The public recognized their future was bleak and discarded or indiscriminately burned or destroyed millions upon millions of these notes. Banknotes worth a few cents went up in flames with those which earlier were worth tens or hundreds of thousands of dollars or yuan. What remained was a random selection that did not reflect what previously existed. Some common notes became rare, and some rare notes, not so rare.

For these reasons, it is not surprising that many surviving Republic banknotes have defects. Some have burned edges. Others have graffiti, from when they were used to “snort” opium, or as mementos brought home by war veterans who served in China. Still, others possess holes or tape, indicating they were mounted and were spared destruction.

I believe collecting Republic of China banknotes offers numerous benefits. One can acquire storied pieces of history with the mystery and intrigue that attends them. Also, you have a variety of areas of interest in which to specialize. Further, enormous challenges and “the chase” await the advanced collector due to the rarity of many notes. Finding some in Extra Fine, let alone in crisp Uncirculated condition, can be quite daunting and present a multi-year undertaking. In fact, previously unknown and valuable discovery pieces are still being found.

The investor, on the other hand, currently can acquire very rare notes for a few hundred dollars or less when they can find them. As China progresses and more of its people move into the middle class and higher, additional collectors will enter the market. They will join the legion of Chinese collectors of PRC notes as well as others from around the world, who will begin to collect the Republic banknotes. This will place added upward pressure on prices. I believe the combination of the above factors and others makes collecting and/or investing in Republic of China banknotes extremely compelling, and likely quite rewarding.