Aulus Vitellius Germanicus Augustus was Emperor of Rome from 16 April to 22 December 69 CE.

Emperor Galba had appointed him to the position of Imperial Governor of Lower Germany in 68.

Following the collapse of the Julio-Claudian dynasty, Vitellius was proclaimed Emperor by the legions of the Rhine. He assumed the title in a more official capacity after defeating Otho’s armies in battle and driving his own forces into Rome. Vitellius garnered the support of the armies of Upper Germany as well as the governors of Spain, Gaul, and Britain. His claim was challenged by the eastern legions and their commander Vespasian, who defeated Vitellius at the Second Battle of Bedriacum and executed him on December 22, 69.

The quality of the portraits on aurei of Vitellius varies greatly, from caricature to realistic. Many artists succumbed to the temptation to portray him as obese and featureless. On more masterful renderings, Vitellius’ countenance is drawn with attention being paid to his rough-hewn features.

On the reverse of one style of aurei, a civic crown is depicted. This symbol represents the crown bestowed to Romans who saved the life of another in battle, or whose actions preserved the state. It was a symbol that represented the highest honor that could be bestowed on a citizen or soldier. 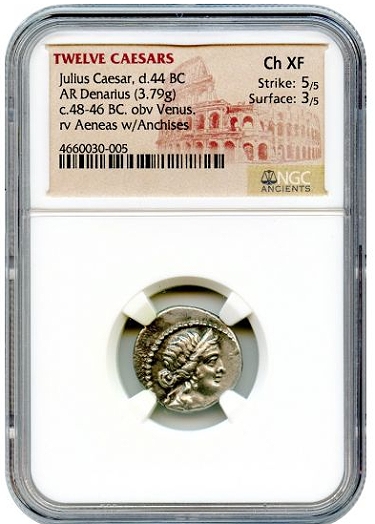