The Dahlonega Mint opened in 1838 as a result of the North Georgia gold rush. The difficulty of transporting gold ore to Philadelphia for deposits and/or coinage made this former backwater a viable location for the production of coinage. The Mint was opened until 1861 when the outbreak of the Civil War closed all three southern facilities.

If I had to select the Most Popular Branch Mint it would likely be Dahlonega (although Carson City could make this boast as well). Dahlonega gold coins have become an avidly sought-after area of the market with collectors from all over the country building sets; not just from the Atlanta area as was the case a few decades ago.

Dahlonega gold coinage exists in four denominations and there are no impossible rarities as with most of the other southern mints. There are numerous ways by which to collect Dahlonega coins, ranging from casual to obsessive. In this article, we will look at some of the most basic ways to collect these coins – along with some clever methods you might not have considered.

The easiest way to collect Dahlonega gold is to acquire one example of each of the denominations which were produced at this mint. These are as follows:

There are no less than 10 major design types of Dahlonega gold coinage. Many collectors seek to complete a set which includes one of each of the following: The most popular grade range for a 10-coin advanced set of Dahlonega gold is EF to Choice AU. An Uncirculated set is possible, but it is very rare and expensive due to the 1855-D dollar and the 1854-D three dollars.

A nicely matched set of EF coins costs approximately $125,000, with the Type Two gold dollar and the Three Dollar piece accounting for at least half of the total cost.

A set with all the coins in AU grades costs approximately $175,000 but the overall cost would be greater if the majority of the coins were AU55 to AU58 and were CAC approved. A set with all the coins in Uncirculated is possible but it is extremely difficult to complete. It would run in the $400,000-500,000 range and could potentially be even more if very high grade (MS63 and finer) coins are featured.

Every collector feels an affinity for a specific denomination. Each of the three primary denominations struck at the Dahlonega Mint have their pros and cons.

The small size of the gold dollar is a turn-off to some collectors. It is hard to embrace the concept of spending thousands—or even tens of thousands—of dollars for a coin that is about the size of the average adult’s thumbnail.

Also, the gold dollars from this mint are crude and they lack the “pretty” appearance that larger-sized, better-struck coins from this facility display.

Yet the very reasons that cause some people to dislike gold dollars are the same exact reasons why others like them. They are so small and can be so crude that this gives them a certain charm.

Sophisticated collectors like Dahlonega gold dollars due to their small mintage figures. Only one of the 13 issues has a mintage of more than 10,000, and five have mintages of 3,000 or less. The Dahlonega quarter eagle set is the most challenging of the three primary denominations from this mint. Assembling a set requires a good deal of patience and careful study of specific issues. Six dates are very scarce to rare (1840-1842 and 1854-1856) and even the “common” dates are not regularly seen with good strikes, choice surfaces, and natural color. In AU grades, a Dahlonega quarter eagle set is very difficult to assemble, especially if quality and originality is an issue. A nice set will run in excess of $250,000.

It is theoretically possible to assemble a set in Uncirculated but this would be a remarkable accomplishment (as far as I know, it has only been done two or three times) and it would be both costly and long in duration.

The half eagle series is the most popular denomination from Dahlonega to collect. The coins are large in size and there are no impossible dates to acquire. Such a set consists of 26 different issues with two 1842-D (Small Date and Large Date) and two 1846-D (Normal Mintmark and D over D Mintmark).

The two scarcest issues are the 1842-D Large Date and the 1861-D. The former is much undervalued despite its being essentially unavailable in any Uncirculated grade. The latter is very popular, and as a result it has become one of the more expensive issues from this mint. 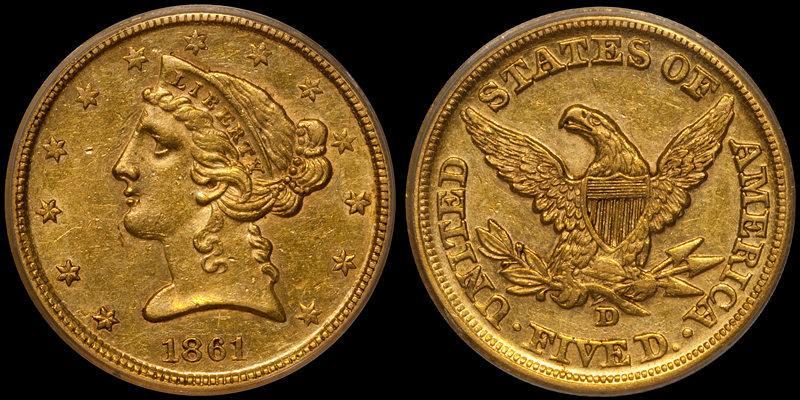 Assembling a nice, evenly matched EF set of Dahlonega half eagles is not difficult. It will require around $125,000-150,000 with around half of this amount being used on the two key issues. An AU set will be more challenging and some of the “common” issues will prove harder to locate than one might imagine. This set will cost around $225,000-250,000. An Uncirculated set is theoretically possible, but as with the quarter eagles from this mint, a few issues will be nearly impossible to locate.

A Complete Set of Dahlonega Gold

A complete set of Dahlonega gold is generally understood to contain the following:

This is a grand total of 60 different issues covering four different denominations. It is feasible that you could race through this set and assemble a full run in a year. But you will be cutting a lot of corners unless you get extremely lucky. Nice Dahlonega gold of all denominations can be really hard to locate and you might have to wait for years to find, say, a truly nice AU 1840-D quarter eagle.

Here are a few basic rules that should be followed:

Be Patient: You can finish a mediocre set quickly, but rushing inevitably leads to mistakes. Wait for the “right coin” to come along.

Stretch for Exceptional Coins: Truly choice, high-end Dahlonega coins are very hard to locate. Don’t miss out on the chance to purchase an important coin because it’s a little spendy. High-quality coins will inevitably pay for themselves in the long run.

Buy the Best You Can Afford: If you are focusing on Dahlonega gold then you have a comparatively high coin budget. But not every D mint specialist can get their arms around paying $30,000 for a really choice 1842-D Large Date half eagle. Establish your per-coin budget and be aggressive when a nice $15,000 version of this variety comes available.

If Possible, Buy the Rarest Coins First: Every denomination has at least a few “toughies”. In the quarter eagle series, the 1840-D and the 1856-D are often the last two coins added to a specialized set. If the right situation occurs, try and buy these before common issues such as the 1844-D or the 1847-D. And remember that your opportunities to purchase truly rare coins such as 1840-D quarter eagles are infrequent, while your chance to buy a common date like an 1844-D will be far more frequent.

Buy With Eye Appeal in Mind: The overall value of a complete set is enhanced when the coins are pretty. This sounds basic but it is not frequently followed by collectors. A really crusty PCGS AU58 1846-D quarter eagle is going to add more “oomph” to the overall quality of a set than a dipped, bright PCGS MS61 example of the same issue.

How much is it going to cost to assemble a significant complete set of D mint gold? My best guess is that you are looking at a million dollars or so, and this figure could get much higher if you are thinking of creating a world-class collection.

Buying the Issues with Multiple Levels of Demand

There is a select group of Dahlonega issues with multiple levels of demand. These are coins whose demand is not strictly from specialized Dahlonega collectors but also from first-year-of-issue collectors, one-year type specialists, etc. Putting together a set with nice examples of the following would be an interesting way to “dabble” in Dahlonega. This seven-coin set would be expensive to complete (a minimum of $225,000-275,000 for above-average coins) but it would be extremely liquid, not to mention really fun to assemble.

Here are a few more collecting suggestions, ranging from quick and semi-easy to complex:

Some colorful EF half eagles

Pedigree Set: There are a number of famous Dahlonega sets including but not limited to Eliasberg, Norweb, James Stack, Bass, Pittman, Jasper Robertson, North Georgia, Duke’s Creek, Green Pond, and Chestatee. An interesting set would “collect the collectors” and have an example from as many of these assemblages as possible.

Die Variety Set: A significant number of Dahlonega die varieties are recognized by the grading services and my books on Dahlonega gold cover these in detail. Many advanced collectors supplement their sets by adding significant varieties.

Color Set: A small percentage of Dahlonega coins so exceptional, rich natural colors. It would be interesting to create a set with a number of pieces that display great color.

Would you like to assemble a collection of Dahlonega gold coins with the help of the world’s leading US branch mint gold expert? Call Doug Winter at (214) 675-9897 and let’s discuss how we can begin working on your set.

Get Your Copy of Doug’s Gold Coins of the Dahlonega Mint from CoinWeek Supplies for 25% off.