The latest Internet auction from David Lawrence Rare Coins (DLRC) (number 959 for those keeping track at home) closes this Sunday night, May 7. If you’re unfamiliar with the company, the Virginia Beach-based David Lawrence Rare Coins was founded by David (Lawrence) Feigenbaum in 1979. Over the years the company has sold and handled many historic and record-setting coins, including the Missouri Cabinet of half cents and two specimens of the 1894-S dime.

This week’s auction includes specimens of several classic US coin types, such as Morgan silver dollars, Peace dollars, Indian head cents, Buffalo nickels, Classic Commemoratives and Gold dollars, among many others. For just a smattering of what is available in a David Lawrence Rare Coins Internet auction, here are three highlights from auction #959.

The gold $1 coin was first struck in 1849 after the Coinage Act of the same year authorized them. Originally, the obverse featured an attractive but fairly standard depiction of a tiara’d Lady Liberty. This version ran from 1849 through part of 1854 and is known as Type 1 (Liberty Head). Type 2, or the Indian Princess Head, Small Head type, debuted in 1854 but was struck for only two years. Type 3, the Large Head version of the Indian Princess, succeeded Type 2 in 1856 and continued until the end of the denomination in 1889. You can probably guess the major difference. 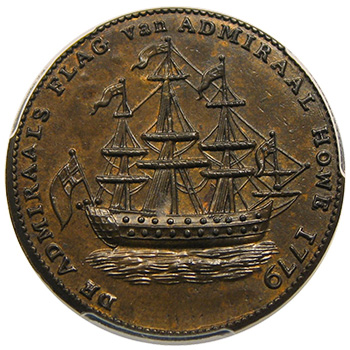 Besides being a rare Proof from only the third year of the type’s run, this coin has great eye appeal, featuring a sharp profile of Liberty and an ultra deep cameo. David Lawrence Rare Coins estimates that it will bring a hammer price of $67,500 USD. At the time of writing the high bid was $12,500.

The color is a creamy caramel and the strike is unusually strong. The entire face of each side of the token is utilized by the artwork. The obverse features Lord Admiral Howe’s British Navy flagship; the reverse shows a rather cinematic rendering of the 1778 retreat of American naval forces from Rhode Island during the Revolutionary War. One immediately notices that the inscriptions are not in English; the language used is Dutch, implying that the token was intended for use by Dutch-speaking people. Numismatic consensus is that the English produced the medal as propaganda to help convince The Netherlands to stay out of the rebellion of the American colonies.

Copper and pewter versions of the token are also known. DLRC estimates this specimen going for $12,250. Highest bid at the time of writing is $5,750. There are a number of extravagantly toned Buffalo nickels in auction 959, and this example is one of the best.

Lot 7076 is a 1923-S graded MS-66 by NGC. But beyond the relatively strong strike, the golden brown and lemon yellow toning that breaks into arcs of rainbow near the rims are what gives this piece its tremendous eye appeal.

Minted in 1923, this is a Type 2 Buffalo nickel, where the inscription FIVE CENTS is located in the recess at the bottom of the reverse instead of superimposed over a representation of the ground that the buffalo is standing upon. Being from the San Francisco Mint, of course, means that the coin almost automatically has a nice strike.

David Lawrence estimates that this particular example of James Earle Fraser’s iconic design should go for $11,750. Highest bid so far is $7,600.

Be sure to visit www.davidlawrence.com and browse through the rest of the lots. You never know what kinds of deals are available at an auction like this; there are no reserve bids on a large variety of Buffalo nickels, classic commemoratives and other select coins, for example.