In 2016, I wrote about Gem Type One double eagles, inspired by my purchase of a PCGS/CAC MS65 1860 double eagle (which was the undisputed finest known for the date). I then asked the question: Just how rare are non-shipwreck Gem Type One double eagles? My research showed that there were only 10 or so PCGS MS65 or finer examples of the entire type that aren’t from shipwrecks. Clearly, these coins are very rare. I recently purchased another Gem Type One double eagle (more on this in a second), which inspired me to do an update of the 2016 blog. 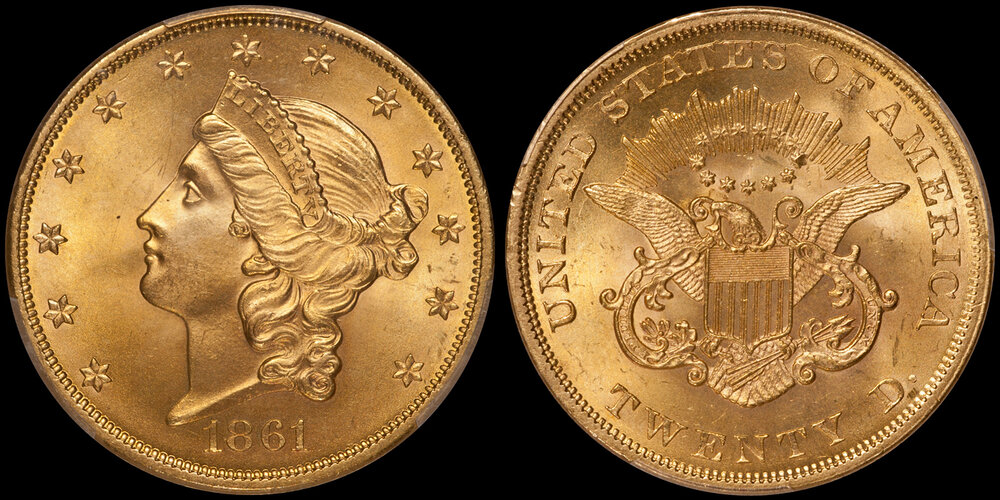 The coin I bought was a PCGS/CAC MS65+ 1861 double eagle. I paid $84,000 USD for it out of the Heritage June 2020 auction. I won it as an agent for the same collector for whom I purchased the MS65 1860 around four years ago. He is working on a world-class collection of Type One double eagles and it is very likely the second finest collection of these coins after the Hansen/Crawford set.

The following chart lists every non-shipwreck Type One double eagle that has been graded MS65 or finer by PCGS. The italicized coins are new to the PCGS Census since 2016, and I will discuss each of these in brief after the chart.

There are five new coins on this list but none are “new” to collectors.

1854 Small Date: This is a coin that used to grade MS65 but was upgraded to MS65+. It is owned by collector Dell Loy Hansen and was formerly in the collection of Dr. William Crawford.

1861 Paquet: I failed to include this coin in the 2016 article but it clearly should have been. It is not only the single-best Type One double eagle in existence, but it is also among the very rarest US gold coins of any denomination with just two known (I bought the other one for $1,645,000 in August 2014).

Why Are Type One Double Eagles so Rare in Gem?

There are a variety of reasons:

When the number of properly graded non-shipwreck MS65 Type One double eagles from both grading services is combined, the total is likely to remain less than 20 for some time to come. I don’t foresee many—if any!—being discovered in old collections or non-numismatic sources. The vast number of Type One double eagles that are being repatriated from overseas sources includes many Uncirculated coins in the MS60 to MS62 range but nothing even remotely close to the Gem level.

If you are interested in top quality Type One double eagles, please feel free to contact me via email at [email protected] or by phone at (214) 675-9897.