On January 20, Heritage Auctions sold Part Three of the Bob Simpson Collection. As with the first two sales, the majority of the coins were non-gold but what few gold coins that were available tended to be spectacular. By analyzing the prices realized, we can get a better grasp of what is going on with the high-end segment of the US gold coin market.

Bob Simpson had a terrific collection of gold dollars and, little by little, these have been selling at the various auctions that contain his coins. There were three important coins in Session III. The second coin was a PCGS/CAC MS65+ 1853-D gold dollar. As you can well imagine, any gold dollar from Dahlonega is extremely rare in Gem, and this coin realized $78,000. Ironically, it last sold (as an NGC MS66) for $74,750 in the Heritage 2/2010 auction. While I agree with the strategy to down-cross the coin, I would say this was a somewhat disappointing result. The third coin was a personal favorite of mine: a scintillating PCGS/CAC MS68+ 1856 Slanting 5 that was previously owned by Steve Duckor and was earlier in the personal collection of David Akers. It was offered as Lot 3037 in Simpson III and it brought $43,200. In the 2015 ANA sale, it brought a nearly identical $42,300. I thought this coin had a very real shot to upgrade to MS69 as it was essentially perfect and I think it was good value.

I can remember the first time I saw this coin during lot viewing for the Byron Reed auction back in 1996. It blew my mind then and I don’t think any less of it today. It is by far the finest known and it is a coin that I still don’t think gets all the love it deserves. I’m not really certain how seriously Bob Simpson took this set. He was clearly very serious about his Indian Head eagles and his Saints, but I wonder if he obsessed about this very difficult to assemble design. 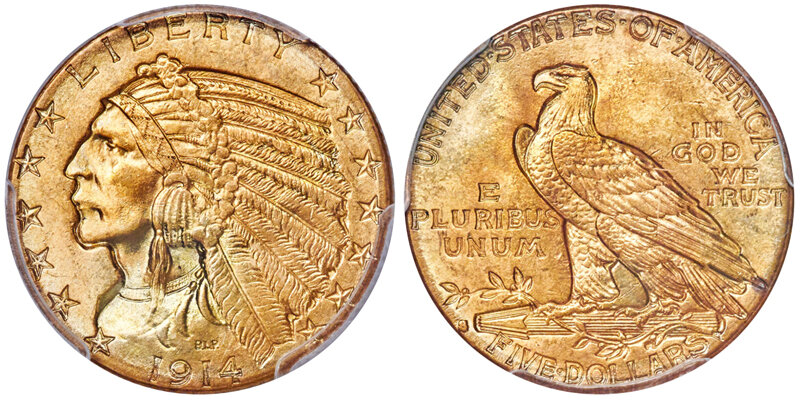 The other notable Indian Head half eagle was a PCGS MS65+ example of the 1914-S. This date is an absolute stopper in the set in Gem. PCGS has graded just one in MS65 and one in MS65+ with none finer. I liked the Simpson coin, didn’t love it, but it still sold for $180,000, which is a record for the date.

The unquestioned highlight of the Simpson III sale was his Gem Proof 1804 $10.00. One of just three known (and one of only four struck) this coin was most likely included in the Simpson Collection because it appears as a Pattern issue in the Judd book (it is most definitely not a pattern). This coin had traded at a reported $5 million via private treaty almost a decade ago which, in my opinion, was way too much at the time.

But time has a way of healing (most) numismatic wounds and in the weeks leading up to the sale, this was among the most-discussed lots in the auction. I expected it to bring in the area of $3,250,000-3,750,000, but before the sale went live it was already up to close to $4 million hammer. The coin wound up selling to a prominent overseas collector for $5,280,000 all in. I consider this an extremely strong price.

My overall take on the Simpson III sale was that prices were extremely strong. Clearly, the upper-end of the coin market is very strong right now, and my fears of the glut of six- and seven-figure coins being unable to be absorbed were most certainly unfounded.

I look forward to the next Simpson sale and I will report on the coins that are most relevant. For auction representation in the Simpson IV sale, please contact me via email at [email protected] or feel free to call me at (214) 675-9897.