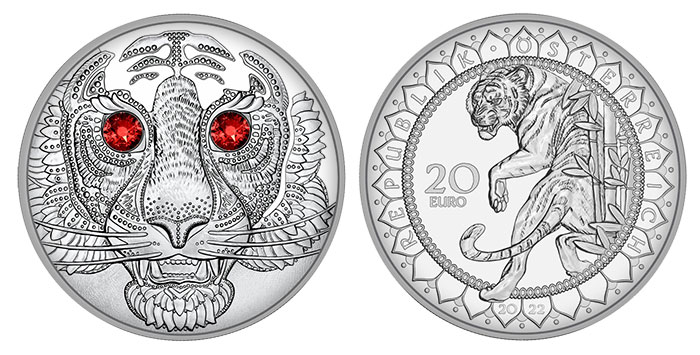 Asia – The Power of the Tiger

Known as the “King of the Animals” throughout Asia, the tiger has no natural enemies but many admirers. Since time immemorial, people have marveled at the tiger’s imposing appearance and natural beauty, which are accentuated by the fiery red crystals by Swarovski that form the tiger’s eyes on the third coin in the Eyes of the World series. The color symbolizes strength and energy, yet for an animal of such power, the tiger is also known as a peaceful creature despite being ready to fight whenever the occasion arises.

In the cultural history of Asia, images of the tiger abound. Power and strength in all their forms are ascribed to the predator. In China, where the Year of the Tiger begins on 1 February 2022, the animal has always been an emblem of potency and bravery. In Hinduism, too, it plays a highly symbolic role, with the goddess Durga often portrayed astride a tiger.

Ever alert, silent and solitary, the tiger sets out mainly at dusk or at night in search of prey, often wandering for hours at a time. Unlike lions, for which rivers and lakes present a barrier, tigers love water and are excellent swimmers. Deep in the bamboo thickets of the jungle, an eerie blur of light and shadow makes a fleeting appearance. But so perfectly camouflaged by its magnificent stripes, the tiger remains unrecognizable.

The obverse depicts a tiger moving through a forest of bamboo. The outer ring of the coin is adorned in the manner of the mandala, the geometric configuration of symbols that possesses magical significance in the rituals of Buddhism and Hinduism. The reverse is entirely dominated by the mighty head of a tiger, whose face is ornamented with punctiform-decorated scars and, last but not least, finely polished crystals by Swarovski.

Series: The Eyes of the World

All five coins in this new series are inspirational because each of the animals portrayed on them embodies an exceptional quality. Each animal possesses a special characteristic for which it was praised in the myths of previous cultures. The coin series not only speaks about these amazing creatures and how they have always inhabited and enlivened the human imagination but also manages to create eye-to-eye contact with the animals.

The eyes of the five animals featured in the series are resplendent on the reverse of the five different coins, each in its own shade of sublime Swarovski crystal, enhancing their already mythical quality.

A collector box is also available from the Austrian Mint for the complete series.

Collector Case: The Eyes of the World

Made of elegant, lacquered wood, the “Eyes of the World” collector case consists of a protective slipcase and a storage box, both featuring a stylized eye in the center that hints enticingly at what lies inside. Continent by continent, the coins not only pay homage to the exceptional animals that were praised in the myths of previous cultures but also take us on a fascinating journey through human history