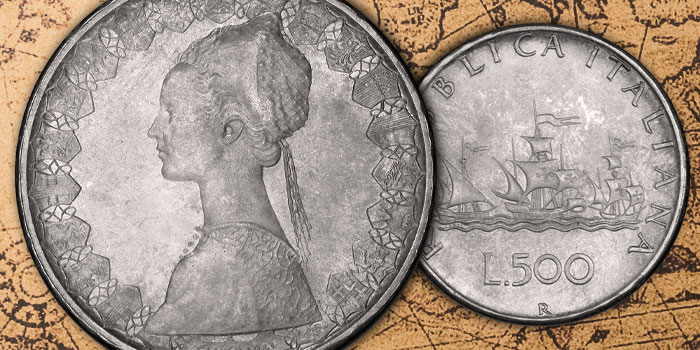 In 1958, the Italian Mint in Rome began striking a silver coin that would come to be commonly called the Caravelle. The Mint would strike just under 100 million pieces for circulation from 1958 until 1967 when they subsequently began producing the same design exclusively in Brilliant Uncirculated and Proof finishes for official sets.

As one of the most beautiful post-World War II European coins, the need for this coin came about as a result of the dramatic economic growth that Italy began experiencing in the late 1950s. With the signing of the two 1957 Treaties of Rome on the 25th of March, the European Economic Community and the European Atomic Energy Community were created. The former helped push Italy to become more interconnected with the larger German, French, and British economies. Accompanied by a structural transformation in their economy, which began emphasizing manufacturing and design over agriculture, Italy underwent what is known today as the Economic Miracle.

During this period, the Italian Gross Domestic Product shot up at unprecedented speeds and unemployment fell from record highs in the late 1940s to below 3% in 1962. This ensured that per capita income rose dramatically and that everyday Italians had money available to spend. To further augment this economic good fortune, the Minister of the Treasury, Senator Giuseppe Medici, ordered the production of a new 500 lire coin.

All that being true, in 1958, the 500 lire coin was equivalent to roughly 80 US cents, or $8.20 adjusted for inflation. This is not an insignificant amount for a circulation coin.

Shortly before the coin’s release into circulation on the 28th of August, 1958, La Settimana Incom (or Incom Week, the weekly Italian newsreel played in movie theaters) released a promotional video on the first of May 1958 calling the coin a “secure shield to defend the stability of the lira”.

Designed by the chief engraver of the Rome Mint, Pietro Giampaoli, the obverse design depicts, as La Settimana Incom describes, a “renaissance female figure”. As with many numismatic designs, there is slightly more to the story than that simple three-word description. Deciding to create an obverse representing all of Italy, Giampaoli worked through five different distinct design phases until completing the final product.

The first stage was quite simple and displayed a left-facing female head wearing a Phrygian cap over long flowing hair. There was a stalk of wheat tucked behind her ear and the legend REPVBLICA ITALIANA circling.

In the second design phase, the head was replaced with a slightly more mature version without the cap, and with her hair tied up in a bun.

The third type displayed the now familiar bust, wearing Renaissance clothing and hat but still with the old legend.

The fourth type reverted to the third type’s head, but with the linked chain of 19 coats of arms instead of a legend.

Lastly, the Renaissance bust was brought back and combined with the coats of arms on the fifth and final type. These coats of arms represent a number of Italian cities and regions; displayed from the lower left, the shields denote Genova, Torino, Aosta, Milano, Trento, Venice, Trieste and Udine, Bologna, Florence, Ancona, Perugia, Rome, L’Aquila, Naples, Bari, Potenza, Catanzaro, Sicily, and Cagliari. The last two are hidden behind the bust.

While there is a rumor that the profile of the obverse bust was based on Giampaoli’s wife Letizia Savonitto, the rest of the figure was most likely inspired by a Renaissance medal created by the artistic master Pisanello. On that piece, the artist depicted Cecilia Gonzaga, the daughter of Gianfrancesco Gonzaga, Marquess of Mantua. Active in Italy during the first half of the 15th century, Pisanello (Antonio Pisano) was most likely commissioned by Cecilia’s brother in 1445. This example, however, was cast posthumously by Pisanello’s workshop in 1447. Cecilia was a scholar who studied at the school founded by Vittorino da Feltre in Mantua. She was also famously independent and refused to marry Oddantonio da Montefeltro of Urbino, against her father’s wishes. Shortly thereafter, Cecilia took the cloth and became a Clarissa nun in 1445.

Interestingly, this was before the medal was designed. Nevertheless, Pisanello chose to depict her in secular dress.

Similarly to the obverse, there were many trial designs for the reverse–and even some controversy!

Initially, Giampaoli was also given responsibility for the reverse design by the Mint. However, he had difficulty coming up with an appropriate design, going through six completely different types. These included Saint George by Donatello; David with the severed head of Goliath patterned on Verrocchio’s famous sculpture; a farmer driving a pair of oxen to plow a field; a single carnation; the fleur de lis; and finally, a rose. Not only did he jump between designs, but Giampaoli also changed the denomination multiple times. These included 1 fiorino, 2 fiorini, and the final 500 lire.

Shortly thereafter, the Mint placed Guido Veroi in charge of the reverse design to solve what seemed like a case of terminal indecision. Veroi quickly put together the first draft of the now famous Caravel design before showing it to the mint director, who approved it after several small changes.

This reverse design displays Christopher Columbus’s three ships–Niña, Pinta, and Santa María–sailing on stylized waves to the right. The ship’s flags were blowing to the left. Below the ships is the denomination and mint mark, with the legend REPVBLICA ITALIANA ringing the design and prova, which translates as “trial”, against the bottom left edge. The Rome Mint decided to strike a total of 1,004 test pieces to distribute to the parliament, but shortly after this trial strike was produced an error was discovered by naval captain Giusco di Calabria.

It turns out that the flags blowing to the left is incorrect since the wind in this vignette was blowing from left to right. There was a debate about whether this was actually an error or not since if a ship is sailing against the wind, it is possible for the flags to appear like this. Interestingly, Veroi continued to insist that he had not made an error. Since he was originally a civil engineer with a specialty in marine engineering, he claimed to know best.

After this came to light, the Rome Mint decided to switch the direction of the flags for the circulation strikes, making the test pieces quite rare and comparatively expensive compared to high-grade circulation strikes that sell for $10 to $15. Examples in mid-to-high grades of this early test can sell for $4,000 to $5,000, with truly spectacular examples bringing more than $10,000 at auction.

The date can be found on the edge of these coins. The complete edge legend is REPVBBLICA ITALIANA ***1960***.

Today, with a total circulation finish mintage of 97,840,000 pieces, these coins are easily collected. However, because they were meant for circulation and very few were collected at the time, it is relatively hard to find examples in Gem uncirculated condition. The later BU and Proof coins, which were struck from 1968 to 1970 and from 1980 to 2001, are easily found in high grades since they were only sold by the Mint in sets. These sets sell for a range of prices, but it is relatively easy to acquire an early example from 1968 for around $50.