The area of Chinese numismatics is broad and complex.

For a long period of time, some issues were shunned as non-numismatic and labeled as fantasy and forgery issues. This, in part, had to do with the writings of Eduard Kann in his book The Catalog of Chinese Coinage, which was the standard reference for Chinese coins first published in 1954. Kann had seen first-hand some of these pieces made and sold to collectors, tourists, and overseas deployed forces as “coins”, and these pieces surface again being promoted as coins when no such piece actually existed or such issue was a forgery.

Yet, feeling the need to include them in his catalog to show people the forgery and fantasy would work against his desires to impede the collecting and promoting of such pieces. Now, after more than 60 years since these pieces were illustrated by Kann, they have an avid and active collector market and are themselves being counterfeited due to their growing market prices. In 2019 at the PCGS Asia office in Shanghai, a set of two fantasy coins were submitted for certification. The pieces tell an interesting story and show how the market for such pieces has blossomed.

China in the 1930s and ’40s was home to foreigners who were stationed there, many of whom would look to bring home souvenirs, gifts, or add to their collecting interests like coins and stamps. Having Chinese coins with diverse designs could help merchants with their sales. This was especially true if these pieces were large crown-size silver items. Finding real Chinese coins that fit this need was costlier than manufacturing such pieces. Filling this need, the producers could choose designs with many Chinese symbols and themes and manufacture uncirculated examples to sell as premium metallic products to such consumers. From these, hundreds of different “fantasy” and “forgery” issues were produced and sold as numismatic and tourist products in China. 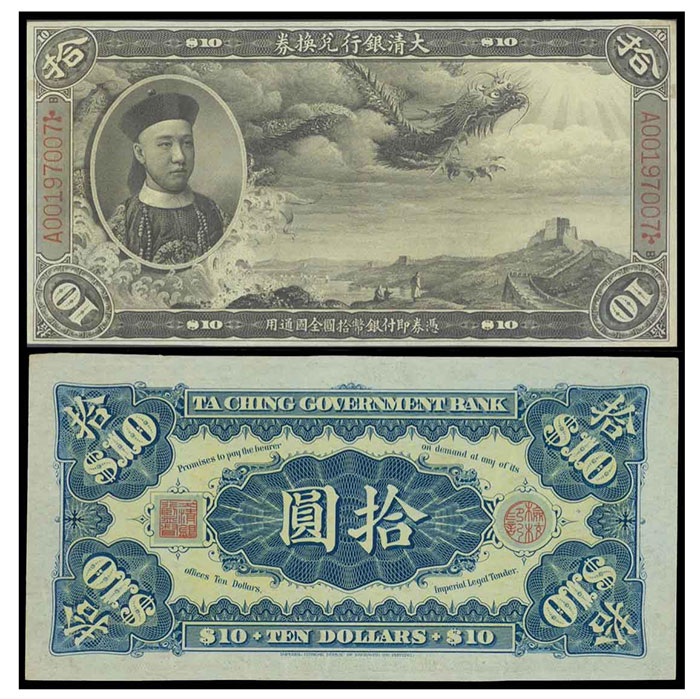 One such design of these fantasy issues is now believed to have been originally issued as a set. The fantasy coins or medals feature unique obverse and reverse designs listed by Kann as B-13 and B-14 and known to come in both gold and silver metals. Incorrectly described as bearing the likeness of Emperor Kuang Hsu by Kann, the piece actually features the portrait of Prince Zai Feng. The reverse features a five-clawed dragon, which for the Chinese means the dragon reserved for the emperor, where four-clawed dragons are used by princes. Prince Zai Feng could not officially use the five-clawed dragon as his symbol. The second piece also incorrectly described by Kann as “Lun Yu”, where no such person is known in the court of the late Qing dynasty, there is an Empress Long Yu, but this person is not the one depicted on the medal. The medal actually features Empress Dowager Cixi. The reverse of the medal features a Fenghuang, or Chinese phoenix.

So, this set of medals has reverses featuring both a dragon and a phoenix. Both symbols of Chinese imagery popular in antiquity, currently and abroad. Together these two mythological symbols can represent “yin and yang”, perfect balance, and successful married life. The obverse of the one coin features Price Zai Feng, the father of Emperor Pu Yi, the last emperor of China, and the obverse of the other depicts Empress Dowager Cixi, who chose Pu Yi as the emperor. Together as a set, the coins symbolized the balance that put Pu Yi into power.

There is one erroneous issue with the medal set, the fictious date on the pieces is “1885”, which doesn’t correspond to anything significant, except maybe to make people think the pieces were much older than their actual date of manufacture. Some have recently written that this set was given as gifts at the wedding of Emperor Pu Yi, but no evidence could be found to substantiate that theory; plus, the diversity of other such medals featuring similar designs indicates that this is just part of the fantasy tourist series. It is a theory that this set could be a wedding gift set, due to the themes.

Perhaps 80 years after these fantasy issues were produced, they have become quite popular among collectors of Chinese coins, both for their designs and scarcity. In the November Chengxuan auction, a set of these medals realized the price of 287,500 RMB, or about $43,000 USD. The set was then submitted to the PCGS office in Shanghai for certification, where both pieces graded MS63.

From pieces made from a variety of reasons from tourist trade to deception, the collectability of the fantasy issues from China continues to grow each year in popularity, rising on the tide of the popular Chinese numismatic market. For their value and popularity, the issues still lack an in-depth study and lack a complete reference. When looked at individually like these two medals, the story and potential intrigue can be imaged. If the research study is done correctly and widely published, the collector base for these fantasy coins may exceed some of the actual coins.