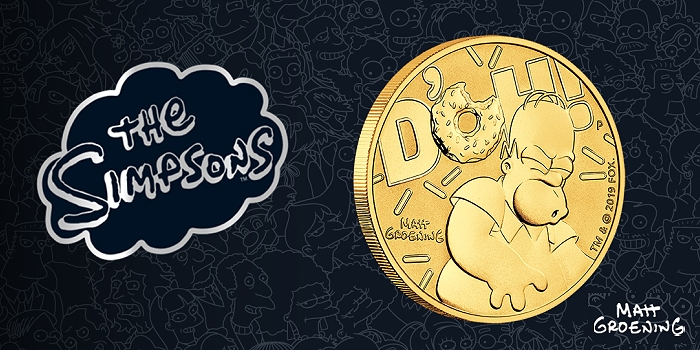 Struck by The Perth Mint from 1oz of 99.99% pure gold, the coin is issued as legal tender under the authority of the Government of Tuvalu.

The coin’s reverse portrays the word “D’OH!” above Homer in his iconic catchphrase pose. A half-eaten glazed donut with sprinkles, Homer’s favourite treat, replaces the letter O in D’OH. Also included in the design is The Perth Mint’s ‘P’ mintmark, Matt Groening’s signature, and a background of sprinkles from Homer’s famous donut.

The coin’s obverse portrays the Ian Rank-Broadley effigy of Her Majesty Queen Elizabeth II, the monetary denomination, the weight and fineness, and the 2020 year date.

The Homer Simpson 2020 1oz Gold Coin is housed in a presentation card.