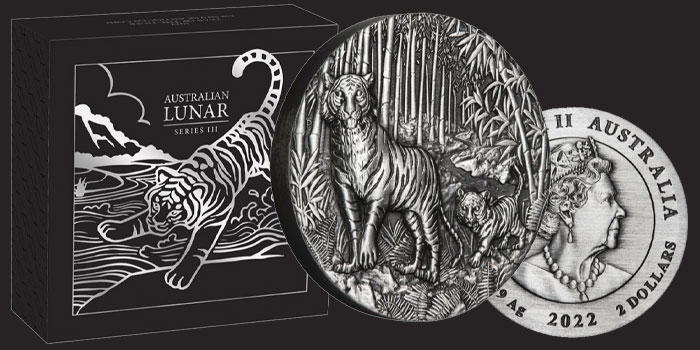 With the tones and surface abrasions of an ancient artifact, this 2oz silver release portrays our 2022 Year of the Tiger design in exceptional detail.

The Australian Lunar Series III 2022 Year of the Tiger 2oz Silver Antiqued Coin is struck by The Perth Mint from 99.99% pure silver and issued as legal tender under the Australian Currency Act 1965. No more than 1,888 of these coins will be released worldwide.

The coin’s reverse portrays a stylized representation of a tiger cub following its proud parent across rocky terrain. In the background, a river is depicted flowing through the bamboo. Also included in the design is The Perth Mint’s ‘P’ mintmark.

The obverse of the coin depicts the Jody Clark effigy of Her Majesty Queen Elizabeth II, the weight and fineness, the 2022 year-date and the monetary denomination.

The antiqued tiger coin is housed in a classic display case with a clear lid decorated with a silver geometric design. The case is packaged in a beautifully illustrated shipper portraying the story of how the tiger became an animal of the Chinese lunar calendar and is accompanied by a numbered Certificate of Authenticity.

The shippers of future animals in the Lunar Series III will, when arrayed together, form a diorama depicting the ancient myth of The Great Race.