AN ARABIAN GULF OIL SHEIK. A retired software executive. A Russian oligarch. A prominent surgeon. Buyers of rare and costly ancient coins closely guard their identity, but tantalizing tidbits of information occasionally leak through the wall of professional discretion surrounding these transactions.

The most spectacular ancient coins are often sold by “private treaty” without an accessible record. But for public auctions, it is still unusual for an ancient coins or medieval coins to exceed a price of one million US dollars (£715,389 UK pounds or €805,289 euro at the time of writing). It gets complicated, because reported prices may or may not include the 15% to 22.5% “buyer’s fee” auction houses add to winning bids.

In contrast, classic collectible rare US coins so often bring prices over a million dollars now that it hardly rates notice in the trade media[1].

The record holder for an ancient Greek coin is the facing portrait gold stater of Pantikapaion, which brought $3,250,000 in a 2012 New York auction. Pantikapaion (or Panticapaeum) on the Black Sea coast of Crimea grew wealthy shipping grain from the Ukraine’s fertile fields to feed Greek cities. Weighing 9.12 grams (about a third of an ounce), the coin was struck between 350 and 300 BCE. On the reverse a griffin stands over an ear of wheat, surrounded by the first three letters of the town’s name. The obverse shows the bearded head of a satyr.

In the words of a cataloguer:

The head of the satyr is a marvel of speaking portraiture. That so much expression could be packed into so small a round would not be believed by any one who had not seen it … If a single coin had to be selected … as by the greatest of all die-engravers, whoever he may have been … the writer would choose this one. Its creator has left no name behind him, but none but a consummate artist of remarkable and original genius could have produced this unforgettable and amazing little gem[2].

In Greek cities of Sicily during the fifth century BCE, the art of coin die engraving reached a standard of technical and creative excellence that would not be seen again until the eighteenth century CE. Cities like Syracuse, Akragas (see below), Leontinoi and Naxos competed to celebrate their patron deities and their athletic and military victories on large silver ancient coins. On his list of 100 Greatest Ancient Coins, Harlan Berk ranks this type as #7 and writes:

“One cannot help but wonder if the artist Kimon was in love with a beautiful girl when he created this incredible die, for the image of Arethusa is perfect in every way (Berk, 38).”

Until it was sacked by the Carthaginians in 406 BCE, Akragas (now Agrigento) was one of the largest and wealthiest cities in the Greek world. Shortly before its fall, Akragas issued a magnificent dekadrachm to honor a winner of an Olympic chariot race. On the obverse, the sun god Helios rides his chariot through the sky with an eagle soaring above. The reverse shows a pair of eagles exulting over a hare they have just killed. This is one of the great rarities of classical numismatics. The unsigned dies are attributed, by style, to the masters Myron (obverse) and Polyainos (reverse). In a 2012 European auction[4], an example of this type from the famous Hunt collection sold for 2,300,000 Swiss francs, equivalent to $2,492,144, but the coin was reportedly never paid for or delivered, and its present status is uncertain.

Fewer than 10 specimens of this coin are known. Harvard’s art museum has a worn example[5]; the British Museum has a better one, which I recently had the pleasure of viewing on loan to the local museum in Agrigento. Two guards with submachine guns stood close beside it.

Leo practically danced as he led us to his vault to show me some of those coins. They were all beautiful Roman and Greek specimens. In an almost reverent voice, I quietly asked him which was the best. He reached for a tray that contained one single silver coin.

“This, my good friend, is the greatest coin in the world.”

Resting in the center of the velvet-lined tray was a silver decadrachm of Athens (McNall, 24). On Harlan Berk’s list of the 100 Greatest Ancients, this is #2. With only about 40 genuine examples known (there are many skillful fakes), the silver dekadrachm of Athens struck c. 467-465 BCE is one of the most desired ancient coins. The obverse, in very high relief, depicts the helmeted head of the goddess Athena. The dramatic reverse shows an owl, wings outspread. At 42.5 grams, the coin is so large that it pushed the limits of hand-hammered minting.

With its rich silver mines at Laurion, Athens had no need for regular gold coinage. But a handful of gold staters and fractions were struck as an emergency wartime issue in 406-407 BCE. Historians believe the gold for these coins was stripped from statues on the Acropolis[7], which served as a sort of Treasury reserve. Only four examples of the 8.6 gram gold stater are known, three of them in museums. The fourth, described as “the best known example and one of the most important Greek coins in the world” appeared in a 2008 European auction where it brought 950,000 Swiss francs, equivalent to $783,182 USD[8].

In 66 CE, the people of Judaea revolted against Roman rule. The rebels fought stubbornly for four bitter years. They issued their own coinage of silver shekels, with inscriptions in archaic Hebrew letters. The most famous Roman coin, by far, is the EID MAR denarius of Brutus (85 – 42 BCE) celebrating Caesar’s assassination; but no example of this rare type (about 80 known) has sold for close to a million dollars. The gold aureus struck by a military mint moving with the army of Brutus and fellow-assassin Casca (43-42 BCE), however, comes close. In a 2015 European auction, an example brought 900,000 Swiss francs (about $930,714 USD), against an estimate of 500,000[11]. 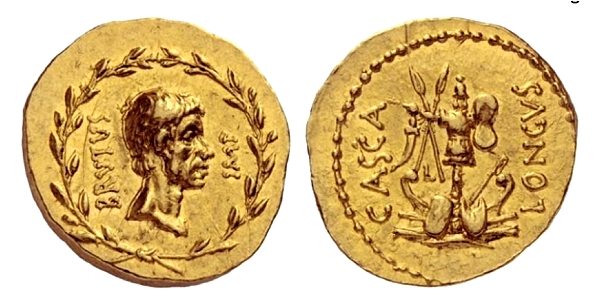 A cataloguer writes of this type:

The fact that Brutus placed his own portrait on coinage is clear testimony to his confusion about his principles and his mission, for it contradicts some of the lofty Republican sentiments that he proclaimed as a defence for his murder of Caesar. When Brutus came to lead his own political movement he, too, behaved as a despot, and like Caesar before him, he succumbed to the temptation to place his image on circulating coins[12].

Struck at Rome in 135 or 136 CE in “orichalcum”[13], a brass alloy, this coin (formerly in the Hunt collection) is described as “the most beautiful Roman coin ever struck”[14]. The intense, sensitive portrait of Hadrian is attributed to “The Alphaeus Master”, a die and gemstone engraver known from other sources as Antoninianos of Aphrodisias. On the reverse, Pax, the personification of peace, cradles a cornucopia while gracefully extending an olive branch. This coin, the best of five examples known, sold in December 2008 for 2.3 million Swiss francs (over $2 million USD) against an estimate of 400,000 francs. At the time, it was the highest price ever paid for an ancient coin at auction.

Although it is the most famous ancient monument in Rome, the Coliseum is rare on Roman coinage. The completion of the Coliseum was commemorated on a rare bronze sestertius of Titus (80-81 CE). The finest example to appear in recent years sold for almost $465,000[15]. In 223 CE, a gold aureus of Emperor Severus Alexander depicted the Coliseum on its reverse. Only two examples of this coin are known and one of them brought $800,000 in a 2008 American auction[16].

The highest auction price ever paid for a Roman gold coin currently belongs to this massive medallion of eight aurei (42.76 grams). Such medallions were made as imperial gifts; for presentation to the highest ranks of Rome’s elite. On the obverse, Maxentius portrays himself bareheaded at a time when all of his contemporaries are crowned, and on the reverse he wears the robes of a senator. Every aspect of this must have been carefully considered in the hope that the recipient of this medallion would be assured that Maxentius did not rule as a despot, but humbly, and at the behest of Roma herself.

On the reverse, a seated Roma (the personification of Rome itself) hands the standing toga-clad emperor a globe, symbolizing his universal authority. In an amazing coincidence, the imperial regalia of Maxentius, including a blue-green globe, the very object depicted on the coin, were discovered on the Palatine Hill in 2006 by Italian archaeologists[18].