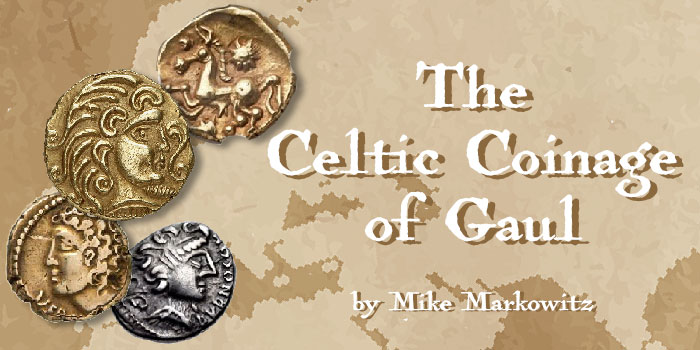 All Gaul is divided into three parts, one of which the Belgae inhabit, the Aquitani another, those who in their own language are called Celts, in ours Gauls, the third. All these differ from each other in language, customs and laws (Caesar, 1).

FOR MOST AMERICANS, “Celtic” means a basketball team from Boston. For numismatists, “Celtic” means a vast category of ancient coinage ranging across much of Europe from the fourth to the first century BCE. Between 58 and 50 BCE, Julius Caesar’s Roman legions conquered the Celtic peoples of Gaul in a brutal war. The spoils of that war financed Caesar’s eventual rise to dictatorship. One result is that the French today speak a language derived from Latin rather than Celtic.

Celtic tribes consisted of a warrior elite, with a priestly class (Druids), an artisan class (the metal-smiths, who made weapons and feasting vessels that were highly valued), and a mass of slaves. The Greek writer Poseidonius of Apameia (c. 135 – 51 BCE) observed that:

Like Romans, Gaulish peoples adopted coinage from the Greeks with whom they traded. Dozens of different tribes issued coins in gold, silver, bronze, and potin[1] (an alloy of copper, tin, and lead). Dating the coins and attributing them to specific tribes is often uncertain. There are hundreds of different types issued over a period of three centuries and a brief survey like this can only illustrate a few examples. Often based on Greek or Roman designs, these coins expressed a creative artistic sensibility and are avidly collected today.

In southern Gaul, silver drachms of Massalia (now Marseille, founded as a Greek colony around 600 BCE[2]) strongly influenced native coinage. In northern Gaul, the main numismatic influences were the handsome stater of Philip II of Macedon (reigned 359 – 336, father of Alexander the Great), about eight grams of very pure gold, and Philip’s silver tetradrachm of about 14 grams. Many Celts served as mercenaries in the armies of Philip, Alexander, and their successors. They brought their wages home, and these coins circulated widely, being copied and re-copied for centuries.

As early as the third century BCE, the Arverni, a powerful tribe of central Gaul (the region of Auvergne is named for them) closely imitated Philip’s gold stater. The laurel-wreathed head of Apollo appears on the obverse. Celts identified gods of the Greco-Roman pantheon with their own tribal deities. On the reverse, a two-horsed chariot (biga) gallops to the right, above Philip’s name in Greek[3]. The Celtic chariot was still a combat platform; for Greeks, it had become a sporting vehicle.

Some tribes issued fractional gold, like the half stater[4] (hemistater) of the Ambiani of northwestern Gaul (the city of Amiens is named for them). The quarter-stater of about two grams eventually became the most common gold coin.

As supplies of gold dwindled, tribes struck coins in an increasingly debased alloy, such as the mostly silver half-stater of an uncertain northwestern tribe dated to the late third or early second century BCE[5]. On the reverse, the name “Philip” is reduced to an abstract pattern of horizontal and vertical strokes. The engraver decorated the reverse with a profusion of symbols: stalks of grain, a sword, and a ship. The Redones (or Riedones) lived in Brittany. The French city of Rennes preserves their name. In the second century BCE, they issued magnificent staters with the chariot on the reverse replaced by a galloping horse ridden by a naked female warrior, possibly the goddess Epona[6], protectress of horses and leader of souls to the afterlife (psychopomp). The head of Apollo on the obverse is rendered with unusual skill and sensitivity[7].

A seagoing tribe, the Veneti of Brittany built strongly-framed ships that could sail the stormy Atlantic Ocean. Coins of the Veneti have surreal designs that seem hallucinatory – curling strings of beads that end with tiny severed heads surround the head of Apollo on the obverse, and the chariot on the reverse is drawn by a human-headed horse leaping over a winged male figure[8]. An example of this quarter stater, possibly the finest known, brought over $13,000 USD in a recent European auction.

A powerful Belgic tribe, the Bellovaci adorned their gold staters with starbursts. The French city of Beauvais commemorates their name, which meant “the shouters” in Gaulish. Apollo’s head on the obverse is reduced to an abstract pattern, with a prominent eye[9]. By the first century BCE, Gaulish staters declined to about 6.5 grams weight in gold of 18 to 20 kt. Coins of the Bellovaci came to Britain with Belgic invaders c. 125 BCE; examples found in southern England are often very worn and clipped (Sear, 16). Caesar conquered the Bellovaci in a hard-fought campaign in 57 BCE.

The Remi were another strong and prosperous Belgic tribe. The French city of Reims preserves their name. Allies of the Romans, they were one of the few tribes that did not join in the revolt against Caesar (52 BCE). A small bronze of the Remi bears the tribe’s name “REMO” on both sides[10]. The obverse shows three male heads in profile, interpreted as the three parts of Gaul, three clans of the tribe, the mythical three-headed monster Geryon[11], and even the three Roman figures of the Triumvirate!

A Belgic tribe living between the rivers Oise and Marne, the Suessiones gave their name to the city of Soissons. Many of their coins from the first century BCE have been found in Britain, a result of trade or migration. They issued handsome large cast potin coins[12] (see above) with elaborate abstract designs.

The Aedui (or Haedui) lived between the rivers Loire and Saône in central Gaul. Their capital was Bibracte[13] (near the modern city of Autun.) Ruled by an elected magistrate called the Vergobret and a “senate” of nobles, they were long-time allies of the Roman republic. Aeduan silver coinage of the first century BCE was based on the Roman quinarius (about two grams, half the value of a denarius). An example that appeared in a 2016 auction[14] bears the image of a warrior holding a severed head, and the name of Dumnorix, an Aeduan leader who was killed resisting Caesar.

The Parisii were a small tribe that lived in the area that would one day become the capital of France and bear their name. Many collectors consider the gold staters of the Parisii to be the most beautiful Celtic coins. The obverse head of Apollo is boldly abstracted, with strong lines. A network pattern above the horse on the reverse is thought to represent the canopy of the sky, spangled with stars. A superb example[15] featured in a 2008 European auction brought over $86,000. Living on the border of the Roman province in southern Gaul, the Arverni gave their name to the region of Auvergne. Perhaps the most famous ancient Gaul, Vercingetorix (c. 82 – 46 BCE), chieftain of the Arverni, led a coalition of tribes in revolt against the Romans in 52 BCE. He became a French national hero in the 19th century. His name[16] appears on very rare gold staters, probably issued to finance the war. An example of this type brought over $233,000 in a European auction[17]; apparently a record price for a Gaulish coin. A specimen with a more complete inscription is a French national treasure preserved in the Cabinet des Medailles in Paris[18].

A famous Roman denarius issued in 48 BCE is often described as a portrait of Vercingetorix. A cataloguer wrote:

It is difficult to imagine anyone placing such a dramatic portrait of a defeated foe on their coinage, but it is clear from surviving sources of the period that the Romans had a good deal of respect for the Gauls as honorable warriors. Crawford and Sear believe this identification is unlikely, but the large, distinctive, and carefully engraved head suggests the die cutter worked with an eye toward creating an individualized portrait, rather than a stylized personification of a Gaul. The reverse is also of particular historical interest, in that it depicts the manner in which chariots were used in Celtic Gaul[19].

Captured at the epic Battle of Alesia[20], Vercingetorix was ritually executed in Rome as part of Caesar’s triumph in 46 BCE.

Living in the lower Seine valley, the Veliocasses had their capital at Rotomagus (Rouen). A handsome bronze[21], c.50 BCE, shows a profile female head on the obverse and a walking lion on the reverse. Although most of the inscription is off the edge of the coin, it recorded both the name of a chieftain (SVTICCOS) and the town (RATVMAGOS).

Centrally located between the Seine and the Loire, the territory of the Carnutes included the most important shrine of the Druid religion, where priests from all Gaul convened annually. Their cast bronze coinage is common and widely distributed. An eagle with spread wings is a typical design on coins of the Carnutes[22], often accompanied by pentagrams, crescents, wheels, and sun symbols. The Carnutes joined in the revolt of Vercingetorix. As a result, Caesar burned their capital, Cenabum (Orleans), killed all the men and sold the women and children into slavery.

The Sequani of eastern Gaul invited the Germanic Suebi in 71 BCE to help them fight their rivals, the Aedui, but the Suebi took over much of their territory and reduced them to virtual slavery. In 58 BCE they appealed to Caesar, who drove out the Suebi. Nevertheless, they joined the revolt against the Romans in 52 BCE. Living close to the Roman province of Transalpine Gaul, the coinage of the Sequani was strongly influenced by Rome. A silver quinarius of about two grams crudely copies the helmeted bust from Roman coinage but bears the name of Togirix, a local chieftain[23]. Used to pay Gaulish auxiliaries serving in the Roman army, this coinage remained in circulation for many years after the Roman conquest.

Gaulish coins are found mainly in France, Belgium, and the Rhineland. Many also crossed the English Channel and are found in Britain. The best examples typically surface in major French, German and Swiss auctions. Much of the literature is in French. Standard references commonly cited in auction catalogs are De la Tour (1892; often abbreviated to LT) and Delestrée & Tache (2002-2008; abbreviated to D&T).

In auction sale catalogs, which are commonly organized by geographic region, Celtic coins are usually listed first, with Gaulish coins coming after those of central Europe and Britain.

[16] Common in Gaulish male personal names, the suffix –rix means “king” or “ruler” (from the same Indo-european root as the Latin word rex).

Megaw, Ruth and Vincent. Celtic Art: From Its Beginnings to the Book of Kells. New York (2001)