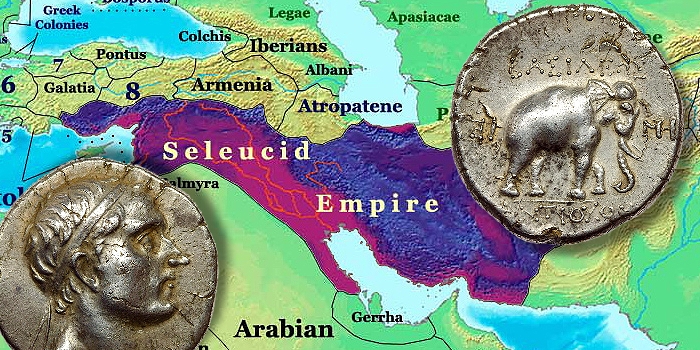 When Seleucus III was poisoned by his officers in 223 BCE, his 18-year-old son, Antiochus, inherited an empire that was rapidly falling apart. In a reign of 35 years, Antiochus III tried to emulate the conquests of Alexander, earning the epithet Megas (“the Great”). The remote province of Bactria (now part of Afghanistan) had broken away, and the fierce Parthians threatened the northern border. The Egyptians occupied Palestine and Phoenicia.

Then Molon, governor of Media (western Iran), rebelled, declaring himself king. Neighboring provinces joined the revolt, and Molon captured the eastern capital, Seleucia on the Tigris. Molon’s portrait survives on a unique silver tetradrachm now in a German museum[1]. Taking personal command of his army, young Antiochus crushed Molon’s revolt (Spring, 220 BCE). When the rebel killed himself to avoid capture, his corpse was mutilated and crucified.

Achaeus, cousin of Antiochus and governor in Anatolia, now rebelled declaring himself king at Sardis, the western capital. A stern, bearded portrait of Achaeus appears on his very rare tetradrachm (only five known), with a standing figure of war-goddess Athena on the reverse. An example of this coin brought $130,000 USD in a 2011 sale[2]. The revolt of Achaeus lasted almost six years, so his bronze coins survive in greater numbers[3]. Betrayed and captured, Achaeus was flayed alive, his body then mutilated, beheaded and impaled. An idealized portrait of young Antiochus appears on a beautiful tetradrachm from an uncertain mint in Phrygia[4]. The standard reverse of Apollo seated on the omphalos stone, testing an arrow appears on most of his silver and gold coinage. The gold is quite rare; a few massive octodrachms (34 grams – over an ounce) were probably struck as royal presentation pieces with the same dies used for silver tetradrachms. A unique example brought almost $69,000 in a 2012 European auction[5]. 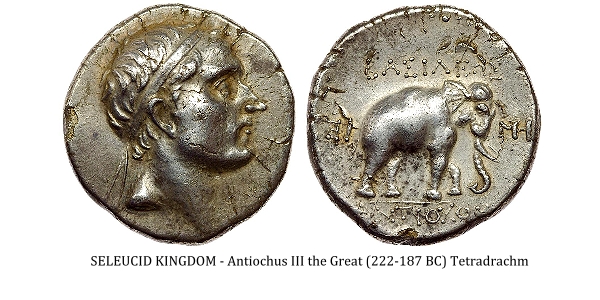 In June, 217 BCE, Antiochus III was defeated by the Egyptian army of Ptolemy IV at Raphia, near Gaza in Palestine–despite the superiority of Seleucid Indian war elephants over Ptolemy’s smaller North African forest elephants. The war elephant appears on some late tetradrachms of Antiochus[6].

Antiochus campaigned in the East for many years, regaining lost territory, and arranging dynastic marriages with rulers of Cappadocia, Armenia, and Bactria. A victory over the Egyptians led to the marriage of his daughter Cleopatra[7] to young Ptolemy V in 193.

In 192 he made a catastrophic decision to invade Greece, provoking conflict with the Roman Republic. Antiochus even gave refuge to the fugitive Hannibal, Rome’s bitter enemy, employing him as a military advisor. Decisively defeated by Rome at the Battle of Magnesia in 190, Antiochus was forced to pay an indemnity of 15,000 talents of silver–equivalent to 22,500,000 tetradrachms! Under the terms of the Treaty of Apamea[8] (188 BCE), Seleucid kings gave up their warships and elephants and had to send a son to Rome as a hostage. Desperate for cash, Antiochus was killed by an enraged mob while attempting to loot a rich temple at Elymais in Persia (July, 187 BCE). Seleucus IV, aged about 30, was serving as governor at Babylon when his father was killed. This Seleucus is known by the epithet Philopator (“father-loving”). His elder brother, another Antiochus who had been married to their sister Laodice IV (c. 223 – 163 BCE), died in 193, making Seleucus heir to the throne. He then married the widow, keeping control within his own family.

A younger brother, the future king Antiochus IV, was held as a hostage at Rome.

The silver coinage of Seleucus IV bears his serious, dignified portrait and repeats the standard designs of the dynasty; a small wreath and palm frond on the reverse of some tetradrachms probably alludes to a military victory[9].

An unusual innovation in the bronze coinage from the mint of Antioch was a serrated edge, which makes the coins look like bottle caps. Oliver Hoover suggests that the veiled female portrait is Laodice IV (Hoover, 81). The reverse shows an elephant’s head[10]. Seleucus IV was murdered in 175 BCE by his prime minister, Heliodorus, who intended to rule as the power behind the throne. Queen Laodice IV was nominally regent for her infant son, Antiochus. A very rare gold octadrachm showing the queen with her child, formerly in the famous Arthur Houghton collection, now resides in the Eretz Israel Museum in Tel Aviv.

For a few months, silver tetradrachms were issued with a charming portrait of the child king[11]. In theory, the heir to the throne was the eldest son of Seleucus IV, nine-year-old Demetrius, held as a Roman hostage. But his uncle, the third son of Antiochus III, who himself had spent years as a hostage at Rome, raised an army with the aid of King Eumenes II of Pergamum and marched on Antioch. His birth name was Mithradates, but he declared himself king as Antiochus IV in the autumn of 175 BCE. For the third time, Queen Laodice IV married her own brother. Although Antiochus IV adopted his nephew Antiochus, the boy king was quietly killed (170 BCE) as soon as Laodice bore Antiochus IV a son from their union, who later ruled as Antiochus V.

Antiochus IV ruled for 12 years. He invaded Egypt twice, the last time suffering a humiliating reverse when a Roman envoy curtly ordered him to leave the country[12].

When he escaped from the palace, he was most commonly found among the workers in gold and silver, the engravers and jewelers, discussing with a passionate intensity some nice point of technique. On a larger scale, he gratified his love of art in his sumptuous building, in the adornment of his cities; Greek artists thronged to Antioch from all parts; new temples and public buildings rose under his eye (Bevan, 130).

This ruler’s “passionate intensity” is visible in the idealized portrait on some of his “florid style” silver tetradrachms, such as an example struck at Tarsus after 173 BCE[13].

Antiochus IV unwisely meddled in the internal affairs of Judaea, a semi-independent state within his empire. His attempt to impose Greek customs and gods on the fiercely monotheistic Jews provoked a revolt (167 – 160 BCE), documented in The Bible’s First Book of Maccabees[14]. In Jewish history, Antiochus is remembered as the villain in the story of the festival of Hanukkah, which celebrates the rededication of the Temple in Jerusalem after it was defiled by pagan ritual sacrifice.

After Antiochus IV adopted the boastful epithet Theos Epiphanes Nikephoros (“Manifest God, Bringer of Victory), the rather feminine image of Apollo on the reverse of the tetradrachm[15] was replaced with the majestic enthroned Olympian Zeus, based on the famous gold and ivory statue[16] that was considered one of the “Seven Wonders of the World”.

The title was so long that engravers often had trouble fitting it all on a coin. This is particularly noticeable on the reverse of the very rare gold stater (only four are known). In a 2008 auction, the only example in private hands bought $50,000 against an estimate of $75,000. Crudely engraved and carelessly struck, these coins were probably made in haste for some special occasion. On some of his bronze coins, Antiochus IV is depicted with a spiky “radiate” crown[17]. An example of this type[18] from the mint of Seleucia on the Tigris is one of the few ancient coins inscribed with an explicit denomination; in this case, the Greek letters “∆X”, indicating “four chalkoi”.

In late 164 BCE, on campaign in Persia, Antiochus IV died “of unexplained causes”, leaving the nine-year-old Antiochus V in the care of Lysias, a trusted advisor. Another struggle for succession loomed over the empire.

To be continued in Part III

The author is grateful for the assistance of Dr. Bradley Bowlin and Mary Lannin.

[4] Photo and coin provided by The Medicus Collection, all rights reserved.

[6] Photo and coin provided by The Medicus Collection, all rights reserved.

[9] Photo and coin provided by The Medicus Collection, all rights reserved.

[11] Photo and coin provided by The Medicus Collection, all rights reserved.

[14] Originally composed in Hebrew, it survived only in Greek translation. Included in the Catholic and Orthodox, but not Protestant, Bible: https://en.wikipedia.org/wiki/1_Maccabees

[17] Familiar to Americans as similar to the crown worn by the Statue of Liberty.