STRONG, INTELLIGENT AND long-lived – yet surprisingly gentle – elephants have long exerted a powerful hold over the human imagination. Prehistoric cave paintings depict elephants and their extinct cousins, the wooly mammoth and mastodon. Ivory from elephant tusks was a precious raw material in the ancient world because it was durable and beautiful, but easily carved. Asian elephants have smaller ears than their distant African relatives, a high-domed forehead, a lighter gray color, and a different arrangement of toes.

DNA analysis has only recently confirmed that the forest elephant is a separate species. In antiquity, a population of them lived in the Atlas Mountains of North Africa (these were trained for war by the armies of Carthage and Numidia) but they died out, perhaps as the result of a combination of climate change, deforestation and capture for the Roman arena.

Wild animals that cannot really be domesticated, elephants have a long and often painful history of interaction with humans. The Indus Valley civilization used captive Asian elephants as early as 2000 BCE for logging, transportation, and ceremonial processions.

India, not surprisingly, provides the earliest appearance of elephants on coins. The karshapana, or “punch-marked silver” coinage of India, dates from 600 BCE to ca. 300 CE. Simple but distinctive images of elephants appear, along with bulls, crescents, stars and sunbursts.

Elephants continue to appear on Indian coinage right down until modern times.

The earliest representation of an elephant on Greek coinage was a result of Alexander the Great’s campaign in India. 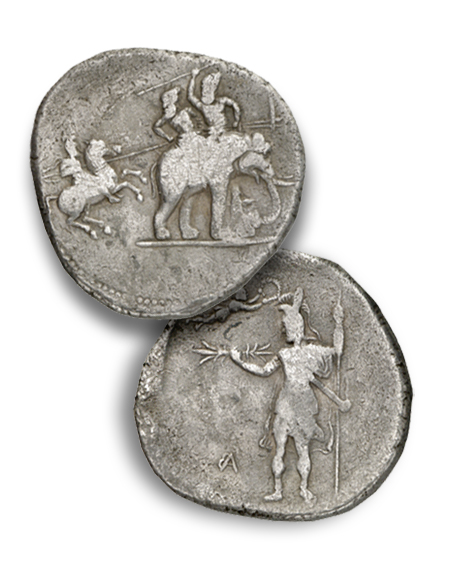 On the reverse of a rare commemorative silver dekadrachm possibly struck at Babylon, Alexander, lance in hand astride his stallion Bucephalus, charges at an elephant ridden by Porus, the Indian king of Pauravas, and an attendant. This may have been an actual encounter during the Battle of the Hydaspes (326 BCE). Horses are spooked by the smell and sound of elephants unless trained through long familiarity, so this powerful composition celebrates the courage of Bucephalus, who died shortly after the battle.

The strangest elephant imagery on ancient coinage is the “elephant scalp” headdress, an adornment symbolizing the “Conquest of India”. It first appears on gold and silver coins of Ptolemy I in the name of Alexander (struck 311-305 BCE). Much later, Greco-Bactrian rulers Demetrius (c200-180 BCE) and Lysias (120-110 BCE) portrayed themselves on coins with this bizarre headgear, celebrating their Indian triumphs and asserting their connection to the legendary Alexander. The elephant headdress is also worn by the personification of “Africa” on the coins of some Roman emperors, including Hadrian (117-138 CE) and Septimius Severus (193-211 CE).

Figure 4: The Elephant Headdress were a featured motif on these Greece coins.

The Seleucid kings of Syria and the Antigonids of Macedonia were successors to parts of Alexander’s empire, and they valued war elephants brought at great expense from India. Seleukos I (ruled 306-281 BCE) traded several provinces (amounting to a large part of modern Pakistan) to the Indian ruler Chandragupta Maurya in exchange for a herd of 500 war elephants plus handlers. These beasts and their descendants fought in the wars of his various successors over the next century. At Ipsus in 301 BCE, 400 Seleucid elephants defeated 75 Antigonid beasts in the greatest elephant battle of classical antiquity. Ptolemy I (ruled 305-285 BCE) issued gold staters that depict a deified Alexander in an elephant quadriga: a huge triumphal chariot drawn by four elephants. On some of his coins, Seleukos showed the war goddess Athena in a similar vehicle. It is doubtful whether such impractical chariots were actually used, but several Roman emperors were sufficiently impressed to repeat the design on their coins, centuries later.

Romans first encountered elephants in battle in 280 BCE, when Pyrrhus, king of the Greek region of Epirus, invaded Italy with an army of 25,000 men and 20 war elephants. The Romans recorded the appearance of the animals on some of the heavy bronze ingots they used as currency at the time. Pyrrhus established his base at the Greek city of Taras, which placed a small image of an elephant below a dolphin rider on its silver coinage. Carthage used North African forest elephants in war against the Romans, with mixed success. Carthage may have also obtained a few Indian elephants through trade.

That may explain the appearance of a lumpish but very Indian-looking elephant on a small bronze from an Etruscan town in the Chiana valley of Tuscany, where Hannibal’s army operated in 217 BCE (It’s hard to imagine a better place for elephants than Tuscany – except perhaps Tuscaloosa, Alabama).

The remarkable obverse of this coin is sometimes cited as the earliest appearance of a black African in Western art. Another small bronze, attributed to the city of Capua (one of Hannibal’s allies), is one of only a few ancient coins showing an elephant carrying a “castle” or tower on its back. African elephants appear on the reverse of rare Carthaginian coins struck in Spain from about 220 to 206 BCE, probably to pay mercenaries.

The obverse depicts the Carthaginian god Melkart (identified with Herakles by Greeks and Romans). Some experts argue that Melkart’s profile bears the features of Hannibal himself (or his father Hamilcar Barca), although this may be wishful thinking.

On the reverse of a famous type, a cloaked rider sits atop the animal’s back, indicating the relatively compact size of the North African forest elephant.

One of the best-known elephant images on coins appears on a massive issue of Roman denarii in the name of Julius Caesar. Based on the multitude of different dies, the size of this issue is estimated at 22.5 million pieces.

Struck by a military mint moving with Caesar in the opening months of the Civil War (April to August 49 BCE), the reverse shows the “sacrificial implements” that symbolized Caesar’s office as high priest (Pontifex Maximus) of the Roman state religion.

The obverse bears the name CAESAR in bold letters below an African elephant trampling on a horned serpent. One theory is that the “horned serpent” represents a carnyx – the serpent-headed bronze ceremonial war trumpet used by the Gauls – so the image celebrates Caesar’s conquest of Gaul. 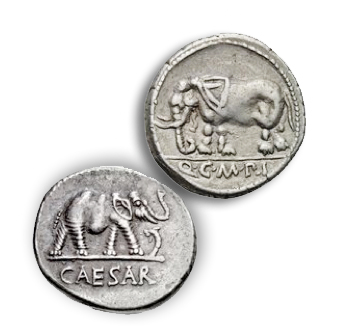 Another theory is that the elephant was a badge or symbol used on the coinage of Caesar’s political opponents, the powerful Caecilii Metelli, descendants of Lucius Caecilius Metellus (lived 290– 221 BCE), who defeated the Carthaginians at Panormus in Sicily in 251 BCE and captured 120 war elephants. By appropriating a symbol used by his opponents Caesar was subtly insulting them.

Because they can live for 60 to 70 years or more, elephants became a symbol of “Eternity” for later Romans. We see this on a rare gold aureus struck after the death of Faustina the Elder in 161 CE. On the reverse, a cart drawn by two elephants with riders carries an image of Faustina with the inscription AETERNITAS. In 248 CE, Rome observed the 1,000th anniversary of its legendary foundation. Emperor Philip I (“the Arab”) celebrated with elaborate gladiatorial games, fighting exotic animals brought from every corner of the empire. These were commemorated on his coins, which survive in large numbers.

On one type, an African elephant is accompanied by the legend AETERNITAS AUGG – “eternity of the emperors.” This is probably the most affordable ancient elephant coin; nice examples can be found for under $100 USD. It is also apparently the last Roman coin to bear the image of an elephant.

As a symbol, elephants may lack the familiarity and grace of the horse, the speed and flight of the eagle, or the ferocity of the lion, but combining strength, longevity, and intelligence, they provide associations that any ruler might wish to associate with himself.

As an exotic import from a distant land (whether India or Africa), the elephant was also something noteworthy, to grab the attention of elites and subjects handling coins in daily life.

Charles. Michael B. and Peter Rhodan. “Magister Elephantorvm: A Reappraisal of Hannibal’s Use of Elephants”, Classical World, Vol. 100, No. 4 (Summer, 2007)

Holt, Frank L. Alexander the Great and the Mystery of the Elephant Medallions. California. 2003