Located in central Greece, the site of Larissa has been inhabited for thousands of years. Through much of this time, it has been one of the most important cities in the region of Thessaly. Despite its long history, Larissa only minted coins as an independent city-state for around three hundred years. Its coinage is known for its beautiful style and is beloved by modern collectors.

Larissa lost its independence around 344 BCE when Philip II (ruled 359-336), King of Macedon and father of Alexander III ‘the Great’, annexed the city. After the reigns of father and son, the area was taken over by various kings, including Demetrius Poliorcetes (306-283) of Macedon and Antiochus III (222-197) of the Seleucid Empire. Despite the city changing hands so many times, Larissa produced coins until the third century BCE.

In 196 BCE, Larissa became an ally of Rome and was one of the main cities in the Thessalian League until it was disbanded in 146.

The city was an important agricultural center in ancient times and was especially famous for its horses — a feature strongly reflected on its coinage. In addition to horses, an equally common design element is the facing head of the local nymph Larissa.

In the following survey, we’ll look at the evolution of the city’s coinage and see many of the fine types that exist. Despite the scuffs on the reverse, the drachm above is an amazing coin with excellent strike and design details. Minted circa 479-460 BCE, the obverse hosts a horse grazing with a cicada above. The reverse features a labrys, or double-headed ax, over the sandal of Jason.

Jason was a hero in Greek mythology. In legend, he was revealed to be the true king of Thessaly by wearing one sandal as he walked into the city Iolcus. Hence, his sandal is used to represent him.

Made ca. 450-420 BCE, the drachm above shows a young man wrestling a leaping bull by its horns. The reverse has a bridled horse leaping to the right. The identity of the young man is nowhere stated, but he is thought to be Thessalus.

In a rather playful scene, the nymph Larissa is shown bouncing a ball on the reverse of this tiny silver obol of ca. 460-400 BCE. Larissa is often portrayed holding or playing with a ball when she’s featured on the minor coins of the city.

Equally charming (but in a more advanced artistic style) is the depiction of Larissa sitting on a hydria, or water jug, kicking a ball away from her. It was minted during the same period as the previous coin. 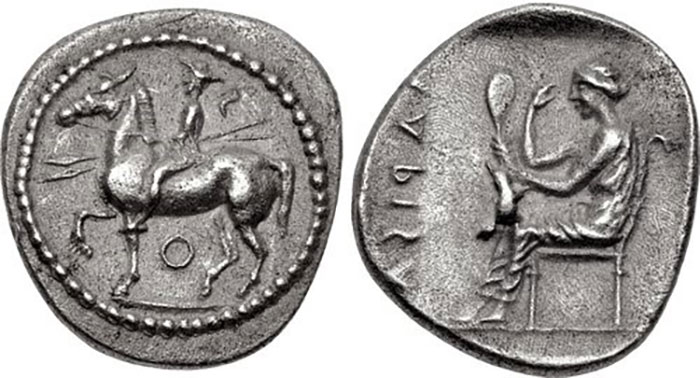 This small silver trihemiobol from ca .460-400 BCE features a horseman holding two spears and the nymph Larissa gazing at herself in a mirror.

The above obol from ca. 460-400 BCE has a lion’s head above a horse on the obverse. The reverse has the nymph Larissa holding an oinochoe, a one-handled jug that could hold enough liquid for a few people. Behind is a spouting fountain in the shape of a lion head. 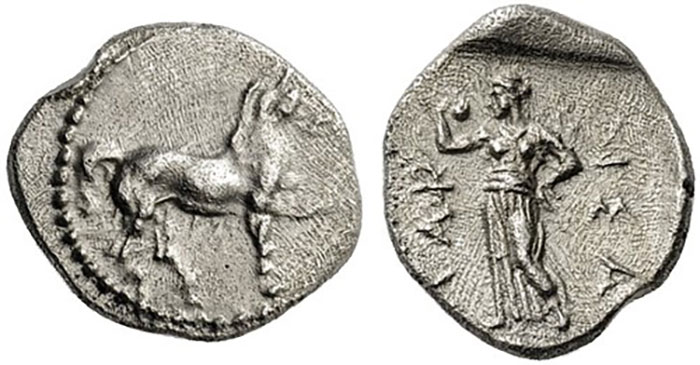 Made ca. 420-400 BCE, this obol has a prancing horse and the nymph Larissa holding a ball in an almost contemplative pose. The reverse die is well struck and exceptionally detailed.

This silver trihemiobol from ca. 420-400 BCE features interesting designs that deviate from the usual types. The obverse has a bull hoof upon a shield while the reverse has a remarkably artistic bust of Asclepius, the Greek god of medicine. With him is his animal-familiar, a snake.

This drachm from ca. 380-365 BCE has a beautiful facing head of Larissa on the obverse. The reverse has a mare and her foal — a charming scene that differs from the single horse normally found on the drachm.

Minted ca. 356-342 BCE, the above drachm highlights one of the more common design combinations for the series. The obverse hosts the facing head of Larissa, while the reverse shows a horse preparing to roll on the ground. The obverse of this silver drachm from ca. 370-360 BCE features Aleuas, a mythical king of Thessaly and an ancestor of Larissan nobility. The reverse shows an eagle standing on a thunderbolt.

Minted around the middle of the fourth century BCE, the drachm above has the familiar facing head of Larissa, along with a cavalryman bounding on his steed. Both dies are engraved in exceptionally fine detail.

The drachm above, from ca. 370-360 BCE, is of exceptional style and strike, with a design that deviates from the usual types. The obverse has a bull leaping to the right while the reverse has a Thessalian cavalryman charging. The warrior is well detailed with his tunic billowing out behind.

Made in the third century BCE, the above 14 mm bronze is among the last coins issued by Larissa in its own name. The obverse bears a profile of the nymph Larissa while the reverse shows a cavalryman charging with couched spear.