MORE THAN ANY other animal (except perhaps the dog), the horse is beloved for its strength, intelligence, speed, loyalty and beauty. The earliest images of horses created by people appear on the walls of Chauvet Cave in France, dated to almost 30,000 years ago[1]. People first domesticated horses for riding about seven thousand years ago on the Eurasian steppes. In the Greek epic the Iliad (first written down c. 750 BCE) the Trojan hero Hektor bears the epithet “tamer of horses” (hippodamoio[2]).

A full-grown horse eats about five times as much as a man. Although a horse can eat grass (men generally cannot,) horses put out to pasture must spend much of the day grazing and digesting. Working horses require a high-quality diet of grain, and in the ancient world, this made them costly to maintain. Only the wealthy could afford to keep horses, so they became symbols of aristocratic status and power.

It is not surprising that horses appeared on a wide variety of ancient coins.

The head of a horse wearing an elaborate bridle and bit appears at the very dawn of coinage on small, rare electrum (gold and silver alloy) pieces from an uncertain mint of Ionia on the coast of the Aegean around 600 – 550 BCE. On such archaic coins, the front half of the horse, or protome, was more common than the entire animal. We see this on a spectacular Ionian stater, possibly from Ephesos c. 575-560 BCE. In a 2013 European auction this rare piece sold for nearly $34,000[3].

A “prancing” horse appears on the obverse of the only type attributed to the last native Egyptian pharaoh, the gold stater of Nektanebo II[4] (360-342 BCE, 30th Dynasty). These coins were issued to pay Greek mercenaries, who were accustomed to payment in gold. Only about 42 examples of this coin are recorded; the most recent to appear on the market sold for US$130,000 in the Triton XIX sale (5 January 2016, Lot 2075). The empire of Carthage extended its rule from North Africa across the Western Mediterranean from the fifth to the third centuries BCE before being finally crushed by Rome in the Third Punic War (149-146 BCE). The horse appears as the national icon on almost every Carthaginian coin; sometimes standing alone, often with a palm tree.

Racing chariots was the NASCAR of the ancient world, drawing huge crowds. The Circus Maximus in Rome and the Hippodrome in Constantinople each seated up to a quarter of a million spectators. Chariot design was very conservative; for centuries, the two-horsepower biga and the four-horsepower quadriga dominated the field.

Successful chariot drivers became celebrities, and the “circus factions” that organized and managed the races became politically powerful. Chariot racing first appears in the Greek Olympic games in 680 BCE – even before the earliest coins. Chariots frequently appear on Greek and Roman coins, including some of the most common types and the most spectacular rarities. The quadriga challenged the skill of the master engravers who created ancient coin dies: four horses have 16 legs altogether, and when they are running together in profile, depicting all 16 legs realistically is a tricky design problem.

For king Philip II of Macedon, 356 BCE was a good year. One of his horses won a race at the Olympic games, and he commemorated this victory on his coinage. In Greek, the name Philippos means “horse lover”[5]. 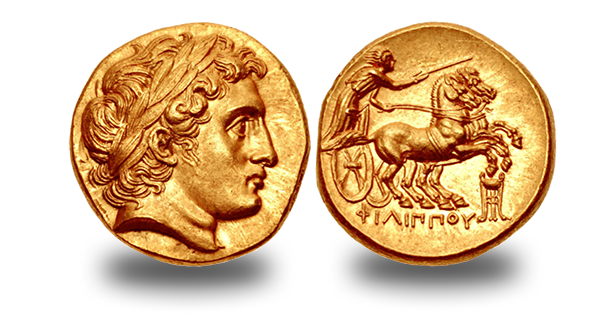 The same year, his wife Olympias bore a son named Alexander. When Alexander was about 12 years old, he formed a lifelong bond with a very special horse:

“Philonicus the Thessalian brought the horse Bucephalus to Philip offering to sell him for 13 talents, but when they went into the field to try him they found him so very vicious and unmanageable that he reared up when they endeavored to mount him… Alexander … ran to the horse and taking hold of the bridle, turned him directly toward the sun, having … observed that he was disturbed at and afraid of the motion of his own shadow; …and stroking him gently when he found him begin to grow eager and fiery … with one nimble leap securely mounted him and … by little and little drew in the bridle and curbed him without either striking or spurring him.
— Plutarch, Life of Alexander[6]

Thirteen talents equaled 19,500 of Philip’s handsome tetradrachms, or about 300 kilograms (660 pounds) of silver. When Alexander went on to conquer the Persian empire, he rode Bucephalus.

On a rare dekadrachm[7] struck to commemorate Alexander’s victory over the Indian ruler Porus in 325 BCE we see Alexander on the horse charging an elephant ridden by warriors. Horses are usually spooked by the smell of elephants unless they have been trained to work around them, so this is a scene of extraordinary courage for horse and rider. When Bucephalus died in June of 326 BCE, Alexander named a city for him.

More than five centuries later, when Macedon was a Roman province with the right to mint local coinage, the story of Alexander and Bucephalus was celebrated on a large (26 mm) bronze. On the reverse of this rare coin, the colt rears up on his hind legs while young Alexander reaches out to steady him. In a 2010 auction this piece sold for US$550[8].

Bucephalus was born on the fertile plains of Thessaly, the “horse country” of northern Greece. Larissa, the capital of this region, issued some of the most charming horse coins of classical antiquity.

On a silver drachm dated c. 356-342 BCE, a horse lowers its head while raising a foreleg. According to experts, this indicates the animal is about to lie down or roll over. The engraver who created this image was surely a keen observer of equine behavior. On another drachm from the same period, a horse stands–we might say protectively–in front of a young foal. The way the foal is rendered in low relief in the background is a striking example of visual perspective on a late classical-era coin.

The Romans generally followed the artistic and stylistic conventions of their Greek teachers when they engraved horses on their coin dies. A remarkable exception is the “Parthian” horse on coins struck by a military mint associated with the army of Quintus Labienus in 40 BCE during the civil wars following the assassination of Julius Caesar.

Quintus was the son of Titus Labienus, one of Caesar’s most capable officers. The elder Labienus broke with Caesar, fought against him, and was killed in action at the Battle of Munda in Spain (45 BCE). Young Labienus fled to Parthia, Rome’s traditional enemy in the East, where he raised a combined Roman-Parthian army. On silver denarii and gold aurei issued to pay this army, the reverse depicts a riderless horse fitted with the saddle, bow case, and quiver of a Parthian horse archer.

Roman emperors loved to portray themselves on horseback. One of the most famous monuments in Rome is the gilded bronze equestrian statue[11] of the emperor Marcus Aurelius that stood in the plaza on the Capitoline Hill[12].

Even the chubby emperor Nero (who would have been quite a burden for the spine of any horse) appears on horseback on a magnificent bronze sestertius dated to c. 65 CE. The emperor, in military attire, rides atop a prancing horse, accompanied by a mounted escort carrying a vexillum (a military flag or standard.) The inscription DECVRSIO refers to a kind of formal cavalry exhibition or display of horsemanship, comparable to the modern sport of dressage.

One of the last numismatic representations of a Roman emperor on horseback was an enormous gold medallion of 36 solidi (162 grams, 84 mm) of Byzantine emperor Justinian I (527-565). Helmeted and armored, the emperor holds a spear and rides a richly decorated horse, while the winged figure of Victory strides alongside bearing a palm branch. The inscription proclaims: “The Security and Glory of the Romans.”

Such medallions struck by the imperial mint, were presentation pieces for high officials, or diplomatic gifts.

Found in Anatolia in 1751, this unique piece was acquired by the French royal collection, stolen in 1831, and melted down. A sulfur cast survived, from which the British Museum created a high-fidelity electrotype.

To modern eyes, many of the horses that appear on ancient coins seem small, even delicate. In part this is an artistic convention: to the elites who ran the mints, the riders were more important than the animals so they were drawn larger. But some archaeological evidence indicates that ancient horses were smaller than modern breeds.

So many ancient coins bear horse images that trying to choose a representative sample of the rarest, most historic, or most beautiful is a nearly impossible task. In Harlan Berk’s superbly illustrated 100 Greatest Ancient Coins (2008), 15 of the selections depict horses–16, if you count the mythical winged horse Pegasus.

Mythical beasts on coins are, however, a subject for another day and another article.

[1] For photos of these astonishingly realistic drawings, see http://proof.nationalgeographic.com/2015/01/05/shooting-chauvet-photographing-the-worlds-oldest-cave-art/.

[12] A replica now stands outside in the weather; the original resides in the Capitoline Museum.

Holt, Frank A. Alexander the Great and the Mystery of the Elephant Medallions. California (2003)