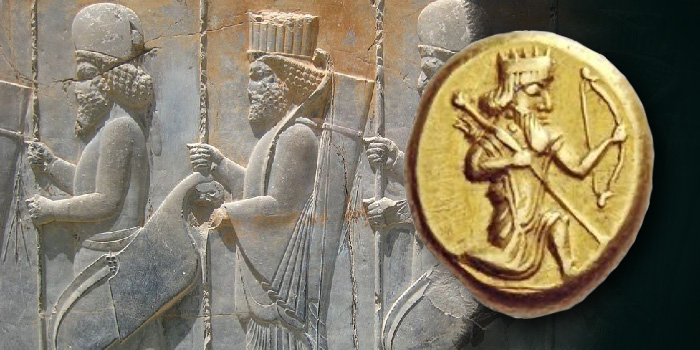 The Achaemenid Empire of Persia ruled much of the Middle East from 550 to 330 BCE. With a diversity of cultures, languages and religions, the economy relied on a mix of regional currencies. “Royal” coinage, issued from the mint of Sardis in Asia Minor[1], consisted of the silver siglos and the gold daric.

The daric was a high-purity gold piece of 8.4 grams based on an ancient weight standard, the Babylonian shekel. It was a month’s pay for a mercenary foot soldier. One daric exchanged for 20 silver sigloi. It was an international trade coin; hoards have been found from Sicily to Afghanistan. It is one of the few coins mentioned in the Old Testament (I Chronicles 29:7, Ezra 2:69 and 8:27, and Nehemiah 7:72)[2].

The Greek word for the coin, dareikos, derives from the name of Darius the Great (ruled 522-486 BCE). Greeks nicknamed the coins “archers” (toxotai) because a bow appears in the design. We don’t know what the coin was called in Old Persian.

These crude, lumpy coins bore no inscriptions. The obverse shows a crowned image of the king wearing a long robe. The reverse is an “incuse punchmark” left by the tool used in striking. British numismatist Ian Carradice classified Persian royal coinage into four types. No Type I darics are known.

The Type III daric is by far the most common. Dated from around 485 to 420 BCE, there are also several variants.

In the great collection of the American Numismatic Society (ANS) in New York, for example, there are 36 darics: 35 of Type III and just one of Type II. On the obverse, the king, in a “kneeling-running” posture, holds a spear in his right hand, and a bow in his outstretched left. In a 2016 Swiss auction, “one of the finest darics to appear on the market in the last twenty years”, brought over $12,000[4]. In contrast, a well-worn example went for just $425 against a $500 estimate in 2019[5].

Some darics and rare “double darics” continued to be struck under Alexander the Great at Babylon for a short time after the fall of the Persian empire.

Carradice, Ian (editor). Coinage and Administration in the Athenian and Persian Empires. Oxford (1987)