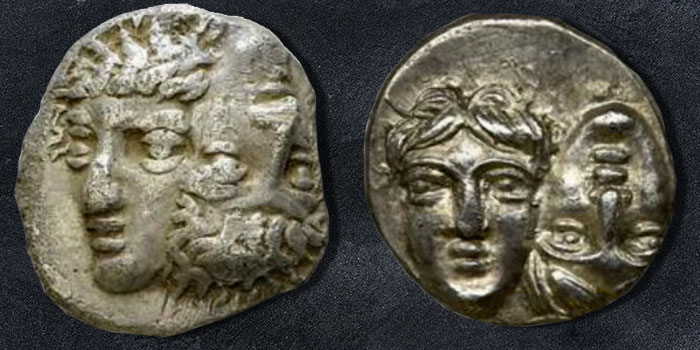 Istros, also known as Histria, was an ancient Greek colony located on the western Dobrudja coast of the Black Sea. Situated approximately 300 miles north of Byzantium, this small city was founded by Miletian traders around 657 or 656 BCE. As the oldest Greek colony on the Black Sea, Istros survived for some 14 centuries before its eventual abandonment in the mid-seventh century CE.

It is unsurprising, therefore, that such a long-lasting settlement would produce several interesting and important numismatic types. Known as the “initiator and main producer” of the distinctive cast bronze arrowhead proto-money in the seventh and sixth centuries BCE, the Istrians used this currency to slowly built their city into a “busy commercial center”.

Perhaps the most recognizable Istrian coin is the “unique” anti-parallel Apollonian silvers. Struck in both drachmai and the associated fractional denominations, these coins portray “essentially identical” dual portraits of the sun god Apollo on their obverse. The inverted heads set these coins apart as a rarity not seen anywhere else in the ancient world. The only real design differences on the obverse come from the engravers’ skill level and artistry. Some of the obverses are finely engraved with highly realistic features, while others are rather crude, as demonstrated below. This design would not change during the entire span of this type’s production, from 434 BCE to approximately 300 BCE.

Similarly consistent, the reverse design shows an eagle in flight with wings outstretched as it clutches a dolphin in its talons. Since dolphins were, and still are found in the Black Sea, it is rather common to see them on Thracian and other Black Sea coins. Historians believe that the eagle represents Zeus and the dolphin the Black Sea. Due to the dolphin’s position as prey, it is logical to assume that the reverse image symbolizes either some unspecified military victory or Greek domination over the region and its vital trade routes.

But unlike the reverse imagery, the obverse has been a matter of interest and study for a long time. In all, numismatists and historians have suggested six possible meanings.

The first and least likely is that the two heads represent the east-west trade routes along the River Danube and into Asia. This does not acknowledge the more important north-south trade routes into Greece and the Mediterranean.

Another unlikely theory is that the Apollonian heads represent dual wind gods. While possible, with their cheeks not puffed out and with their mouths open instead of closed, the obverse imagery does not match that of contemporary wind gods.

The next theory is that the dual-headed imagery represents multiple branches of the Ister river, later to be known as the Danube. While these tributary branches no longer exist, it is possible that this interpretation is correct. Similar to the last theory, however, the iconography does not match. River gods are usually depicted in profile, not facing forward, with beards and long flowing hair. With their short hair and beardless faces, these coins do not match this standard iconography.

A more “attractive” interpretation is that the two heads depict the rising and setting sun. Since the two Apollonian portraits are similar to those with radiate crowns from Rhodes, this is not an implausible idea. However, the “uniqueness” of the Istros imagery proves this false. The rising and setting of the sun is not a uniquely Istrian phenomenon and should therefore be seen on many coins around the ancient world, and not solely of coins from a small trading center on the periphery of the Greek world.

The most common theory about this interesting design is that the two heads represent Kastor and Polydeukes, the mythical Dioskuri. These identical twin brothers, sons of the princess Leda, participated in some of the most famous Greek mythical adventures and are known today as the Gemini twins. While this theory fits in broadly, and there are many numismatic examples of the Dioskuri being pictured on ancient coins, the Istrian type does not include many of the specific details. For example, the brothers are usually shown as full figures, and sometimes on horseback with their signature conical Dioskuri caps. More importantly, they are “seldom identical, never inverted and sometimes with stars above them.” The standard iconography is displayed on this quadrigatus from Bruttium.

We are forced to concede that while this theory is a partial fit, it cannot fully explain the enigmatic design.

In 2005, William Saslaw and Paul Murdin, noted academics at the Cambridge Institute of Astronomy, authored an influential article that argued that the double-headed Istrian coins were actually the earliest commemoration of a solar eclipse in numismatic history. Astronomers are able to predict the date and time of both future and past eclipses to within minutes. After searching for an eclipse that would have been visible from Istros between 450 and 300 BCE, Saslaw and Murdin discovered that at 6:30 am on the fourth of October, 434 BCE, there was a partial eclipse. Initially, the sun would have risen as a crescent with the two points facing up, like a bull’s horns. The sun and moon would have risen at differing speeds, thus as the sun gained altitude the horns would have “flipped” with the horns later facing down. “Clearly the sun god was up to something astonishing.” This would have been “memorable” and “worth recording”. Since “solar eclipses are rare in both space and time,” it would not be unusual for it to be commemorated on a coin.

In fact, in the following centuries, many societies commemorated such events on their coins. The Roman emperor Vespasian included a “star” on the reverse of a denarius to commemorate the eclipse of January 5, 75 CE, and Hadrian’s mint produced the “Star and Crescent” series after the September 3, 118 CE eclipse. Hundreds of years later, the English king John included a crescent sun after there were eclipses in 1201 and 1207 CE, just to name a few.

Not only are partial eclipses “relatively rare”, a once-in-a-century phenomenon, but Istros happened to have witnessed two of them within three years. This dual occurrence should be considered “sufficient to initiate the coinage.” Since as I have discussed in past articles, coins were used to “spread news or propaganda,” it would be logical that the Istrian authorities would include “an emblem advertising Apollo’s favor” as a result of these two astronomical events. Why wouldn’t the locals take “these events as signs of good times”?

A century later on the 14th of July, 337 BCE, there was a third celestial event: a much rarer total eclipse. However, by this time, the city was beginning to decline in economic and cultural importance. Though full eclipses occur every 375 years on average at any given location, the double-headed coinage was already thought mainly to have been discontinued. There are some examples that are believed to have been struck later, but this is disputed, and they are given a date range of between 313 and 280 BCE.

One reason these dates are disputed is the general difficulty in dating this series. Unlike many other ancient coins, this Apollonian series is “never dated specifically, nor is there any datable historical reference.” Usually, there is one of these factors or the other to help numismatists date a specific example. Numismatists must therefore rely on a four-step process to date these coins.

The first step is to analyze their alloy and weights. Before the discovery of the lunar connection, this was used to date the beginning of the series to 480 to 430 BCE.

The next step is to look at their production method. In the earlier issues, the mint workers employed a narrow incuse die for the reverse. This was common in Greece during the fifth century BCE but fell out of use around 340 BCE in Istros.

Another dating tool is the reverse lettering font. Between 359 and 336 BCE, it morphed to closely resemble the text on Phillip of Macedonia, the regional hegemon’s, coinage.

Lastly, numismatists can use hoard membership to help date specific examples. For example, coins from the Orgamé-Argamum Necropolis Hoard were found in a ceramic pot dated to between 380 and 360 BCE. Therefore, the 39 coins inside were all struck before those dates.

Despite the difficulty in dating and the unsettled iconography, these interesting coins are fairly common and enjoyed a “relatively long run” of 150 years. They must have been intended for circulation beyond the city walls because the “variations in weight, size, and purity of the coins were small.” We can therefore infer that they were “important and reliable for commerce.”

If a collector were interested in acquiring an example of this type, they are very affordable. Examples of the full drachmai can cost as little as $80 USD and as high as $750. Fractional examples also fall within this range, with examples valued between $100 and $500.