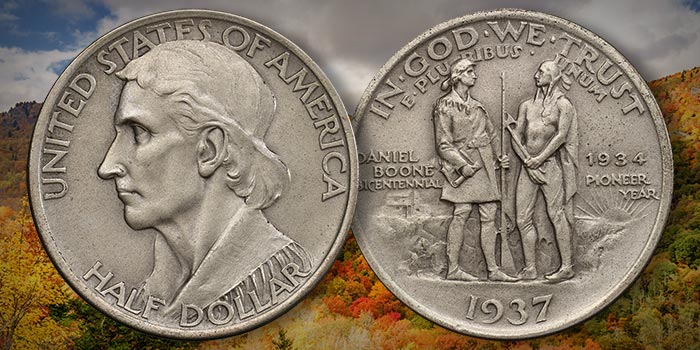 This Philadelphia commemorative half dollar derives from the only Matte Proof set authenticated of the Daniel Boone type, and may well be unique.

The production of these matte proofs was not recorded by the Mint, and their existence was once unknown to many researchers. In his Proof Encyclopedia, Walter Breen cites “rumors” of the possible existence of Matte Proof Roanoke and Antietam half dollars of this year, but makes no mention of the Boone Matte Proofs. More recently, the legitimacy of these coins as genuine Matte Proofs has been an issue of controversy, but their authentication, first by NGC and now by PCGS, confirms their status beyond any doubt.

The origin of the PDS set from which this Proof originates has been researched by commemorative authority Anthony Swiatek with the conclusion that the coins were all struck at the Philadelphia Mint for Chief Engraver John R. Sinnock before the branch mint dies were shipped to their respective facilities. It has been suggested by others that possibly four Matte Proof sets were produced on Sinnock’s account, but no evidence has surfaced to confirm the existence of any but the present coin and its D and S-mint counterparts. Writing in The Encyclopedia of United States Silver & Gold Commemorative Coins, coauthored by Breen (1981), Swiatek states:

“There is a set of the three 1937 coins with matte finish, which has been represented as matte proofs. These are extremely rare and show more detail than on the business strikes. These MS-70 coins must be seen to be fully appreciated. Each of them possesses a double strike with sharp squares letters — especially notable on the PIONEER YEAR inscription. In other words, there isn’t the usual roundness on the lettering, dates or mint marks.”

This incredibly rare Boone half dollar, graded Proof-63 by PCGS, is razor-sharp and fully struck with fine matte surfaces that showcase the design elements to their full extent, while giving the surfaces a soft steel-gray hue common to Matte Proof silver coins. A few light lines explain the seemingly limited technical grade. Nonetheless, eye appeal is exceptional, and the coin has an almost medallic appearance.

The chance to acquire one of three known Matte Proof Boone Bicentennial half dollars is a landmark event for the classic commemorative specialist. Make sure to bid accordingly.