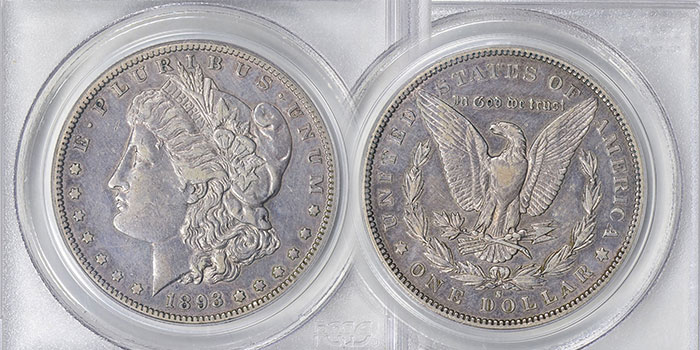 In just a couple days, on Sunday, June 2, bidding ends on GreatCollections.com for this key date 1893-S morgan dollar, graded XF-40 by PCGS. With only 100,000 pieces struck, the 1893-S has the lowest mintage of the entire Morgan silver dollar series. Because of this, even an EF(XF)-40 example can see some serious demand from collectors; the Red Book estimates a coin in that condition to be worth $9,000 USD.

PCGS reports 507 specimens at that grade, but of course there are several graded finer (over 940, in fact). The top-pop PCGS coin–an MS-67–the grading company assigns a value of $1.2 million – though no PCGS examples have been sold at auction and the NGC MS-67 sold in August 2011 went for a little over half that. At any rate, 1893-S Morgan dollars in XF-40 have a robust auction history, with several examples selling in just the first quarter of this year alone. Most of these achieved prices in the $7,200 to $7,800 range, but one piece sold for $9,600 in April.

As for the issue’s performance on GreatCollections, be sure to check out their Auction Archives of over 600,000 certified coins sold in the past seven years.

The Morgan dollar series is arguably the most popular and most collected coin issued by the United States.

It was issued from 1878 through 1904, and again in 1921. Designed by future Chief Engraver George T. Morgan, the silver dollar that bears his name was struck at Philadelphia, New Orleans, San Francisco, Carson City and Denver. Thanks to its late-19th, early 20th-century production run and substantial representation among western branch mints, the Morgan dollar has long been associated with the allure of the American “Old West”.

The coin was very much the result of government pork, as the Bland-Allison Act of 1878 required the federal government to buy silver from mining interests in the western part of the United States. This silver was then struck into dollar coins, for which almost no one had any commercial use. Bags upon bags of uncirculated Morgan dollars (along with some that had been circulated but found their way back) were stored in Treasury Department basements and vaults until they were rediscovered in the 1960s, upending much of what numismatists and collectors thought they knew about the rarity of these issues.