As a result of the pandemic and its effects on the U.S. economy, which have resulted in the largest-ever decline in the gross domestic product (32.9%) in the second quarter of 2020 and tens of millions of unemployed–as well as rising silver and gold prices (with gold having reached several new record highs recently just below $2,000)–the demand for physical silver and gold is exploding. And in the U.S. market, it is United States Mint American Silver Eagles and American Gold Eagles that buyers most want.

Yet this increase does not even come close to meeting the demand for these U.S. bullion coins from buyers, according to the 12 companies (nine of which are American) that are Authorized Purchasers (APs) of these Mint products who then sell them to other dealers who sell to the public.

This is due to a combination of fewer people wanting to sell their coins to dealers (and more looking to buy) at the moment and reduced allocations from the Mint to the APs as a result of production delays and slowdowns that have been needed to make Mint facilities safer for employees who work there.

These factors, and the sharp rise in demand for bullion coins, have pushed premiums since spring to some of the highest levels seen in many years on American Silver and Gold Eagles at both the retail and wholesale levels.

On July 23, the Mint held its regularly scheduled monthly meeting with the APs via a telephone conference call. During the call (which is not open to the public or the press) Mint officials said they are considering producing Silver Eagles at the San Francisco and Philadelphia Mints to supplement production at the West Point Mint, where bullion coins are normally produced to meet rising demand.

From April 8 to 20 Silver Eagles were made at the Philadelphia Mint because the West Point Mint had been closed due to implement safety measures to protect employees from the COVID-19 pandemic.

To address the increase in demand, the Mint is trying to double its output of Silver Eagles from 400,000 every two weeks to 400,000 per week.

Some additional details about the meeting with the APs were obtained by Bloomberg, which the Mint has not confirmed. According to the Bloomberg story, measures taken at the West Point Mint to try to prevent the virus from infecting its employees mean that production there will be slower for probably the next 12-18 months.

“The pandemic created a whole new set of challenges for us to manage,” the Mint said in a document that Bloomberg had obtained. “We believe that this environment is going to continue to lead to some degree of reduced capacity as West Point struggles to balance employee safety against market demand.”

The document allegedly also says the West Point facility can only produce either silver or gold coins at one time, not both. Since the Mint will need to decide when to chose one or the other and to cope with rising demand, Mint officials have asked the APs to provide 10- and 90-day demand projections for bullion coins.

Some people have misunderstood this information to mean there is a shortage of silver planchets like the one that occurred in 2009, which there is not. Sunshine Minting, which makes planchets for the Mint, has confirmed that.

Others have suggested that it means there is a bullion coin shortage, which is partly accurate, or that this is some sort of ploy to keep prices higher, which is not. Instead, there is an inadequate amount of coins being made to meet the unprecedented level of demand.

The U.S. Mint has taken and will take additional steps, including the recent return of the San Francisco Mint to full capacity and the possible expansion of bullion production to that mint and to Philadelphia.

What this means for the market is that premiums should remain elevated as long there is a gap between how many Silver and Gold Eagles the Mint can make and the demand for these coins, and as long as more people are buying rather than selling bullion. 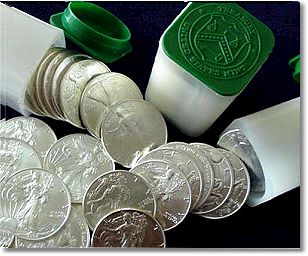 In addition, since the demand for one-ounce and one-tenth-ounce Gold Eagle coins is always higher than it is for the quarter-ounce and half-ounce coins, fewer of the latter are likely to be made.

Also, towards the end of the year, the Mint will need to begin producing large amounts of 2021-dated American Silver and Gold Eagles with new reverse designs to prepare for the start of sales in January. There is always a higher demand for the new coins at the beginning of the year and the new designs may push the demand even higher.

Whether the recent steps to increase production while keeping employees safe will be sufficient to meet the current demand, let alone demand for the 2021 coins, remains to be seen. A worsening of the pandemic would surely result in new shutdowns and slowdowns at the mints.

The situation with bullion coins comes on top of a nationwide shortage of circulating coins, which led the Federal Reserve to ration coin deliveries to banks around the country. The shortage was created mainly because with many businesses closed and fewer people than usual using cash and bringing their coins into banks to redeem, coins have not been circulating as they normally would.

Production was ramped up of circulating coins, and the Mint also asked people to redeem their coins to help alleviate the shortage.