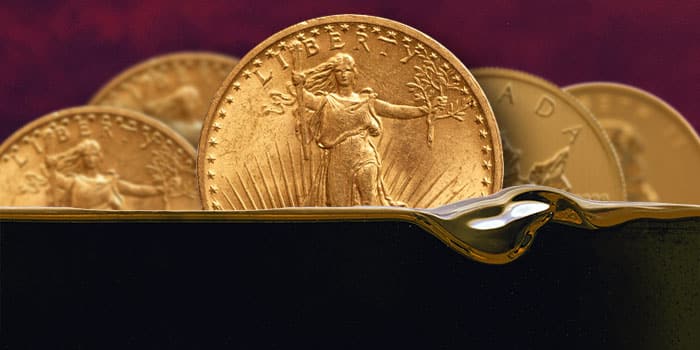 The rising price of oil is a concern for many Americans. The average price of a gallon of gasoline reached an all-time high just weeks ago.

While the reason for rising oil prices seems clear, one question remains: What does this mean for gold prices?

Research from Resources Policy shows that there has been a positive price correlation between the price of oil and the price of gold for more than 80% of the last 50 years. One possible reason for this correlation is uncertainty.

A disruption to the global oil supply tends to be the result of unforeseen events like war, geopolitical tensions, or a recession. During times of uncertainty, investors often seek assets that offer a degree of protection from wild swings in investing markets. Gold serves this need because it is often considered a “haven” asset that is less influenced by interest rates, supply chain constraints, and counterparty risks.

Researchers sometimes call this correlation the “spillover effect”, which occurs when “a large information shock increases the return correlation not just in the market in question, but also in other markets” according to a publication in Energy Research Letters.

Interestingly, the degree of the spillover effect can intensify during periods. For example, one body of research discovered “more pronounced volatility spillovers across commodity futures markets, including oil and gold, in post-crisis periods, including the global financial crisis…and two European debt crises.”

The research from the publication also shows that oil returns have been more volatile than gold returns which seems to reinforce the notion that gold is effective at preserving wealth during periods of upheaval.

The research also shows that the spillover effect has been more pronounced in the setting of the COVID pandemic.

In aggregate, this data is a reminder that investors can mitigate the effects of global uncertainty by allocating a portion of their investable assets to gold. This strategy is likely even more effective when instability impacts the oil market because rising oil prices are so salient. Every American that fills their car with gasoline is aware – on a near-daily basis – of the rising price of oil.

The degree and duration of uncertainty in the world is of course not something an investor can control. They can only prepare for it and react to it. Research like this is a reminder that often a better way to do so is with gold.