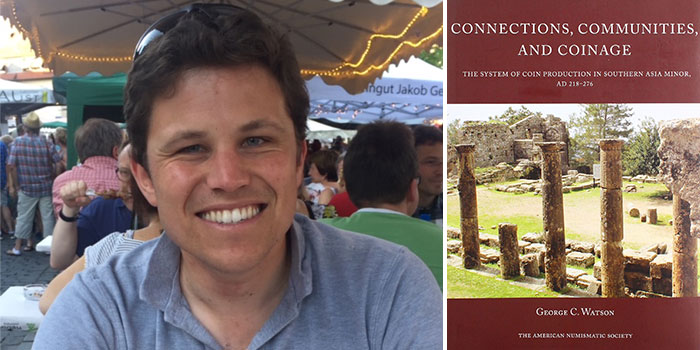 The UK’s Royal Numismatic Society has awarded its Gilljam Prize for Third-Century Numismatics to George Watson’s book Connections, Communities, and Coinage: The System of Coin Production in Southern Asia Minor, AD 218–276 (Numismatic Studies 39). The prize, awarded every two years, recognizes the book or article that represents the best contribution to the numismatics of the third century before the reform of Roman emperor Diocletian.

“I am honoured to receive this prize,” Watson said, “which has been awarded to many distinguished scholars of third-century numismatics in the past. I am very grateful to the ANS for producing such a beautiful book that is worthy of this honour.”

Connections, Communities, and Coinage addresses the system of coin production in the regions of Pamphylia, Pisidia, and Cilicia during the third century CE, radically reappraising the numismatic evidence of die-sharing between cities in Southern Asia Minor.

The ANS congratulates Watson on this achievement.

Order the book from our distributors Casemate Academic (US only) and Oxbow Books (rest-of-world).