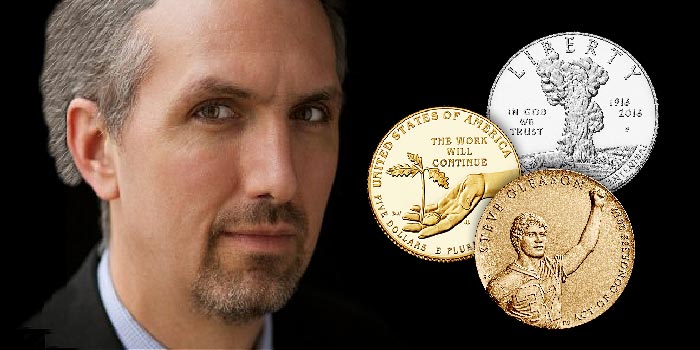 Secretary of the Treasury Steven Mnuchin appointed numismatic curator, scholar, and award-winning author and researcher Peter van Alfen to serve on the Citizens Coinage Advisory Committee (CCAC) on August 11. Van Alfen will serve in the position previously held by Robert Hoge as a numismatic curator. Mr. Hoge’s second term ended on June 14 of this year though he was serving during the holdover period until recently. The CCAC advises the Treasury Secretary on the designs that appear on all U.S. coins and medals.

Peter is an economic historian, nautical anthropologist, numismatic curator, and expert on ancient coinage as well as medals issued since the 15th century. He is currently Chief Curator at the American Numismatic Society (ANS) where he was hired initially as Curator of Ancient Greek Coinage. He has also served as the editor of the Society’s ANS Magazine for the last 15 years. The ANS is dedicated to the study of coins, medals, tokens, and related objects from all cultures and time periods.

Van Alfen has curated exhibits of medals of topics from the Olympics to World Fairs, WWI, and many others.

He is also a member of the Institute for Advanced Study in Princeton, New Jersey, and a recipient of the Loeb Classical Library Foundation fellowship from Harvard University.

His research interests are wide-ranging and include Mediterranean and Near Eastern monetary, fiscal, and trade systems from the late Bronze Age to the early Byzantine period. His current projects include PELLA, an online resource on the coinage of the Argead kings of Macedonia that received a grant from the National Endowment for the Humanities in 2017; Art of Devastation, an online resource on medallic art (non-monetary numismatic items) issued during and right after WWI; and a book on the political economy of archaic Greek coinage. Van Alfen has also written about Arab monetization and Athenian public finance and coinage, among other topics.

In 2020, van Alfen received two major awards for his numismatic scholarship, including the American Numismatic Association’s (ANA) Burnett Anderson Memorial Award for Excellence in Numismatic Writing, which recognizes his body of work in numismatics, and the Numismatic Literary Guild (NLG) award for Best Specialized Book on Ancient and Medieval Coinage Before 1500 for the recent book he co-authored with several other writers, White Gold: Studies in Early Electrum Coinage (ANS, 2020).

Louis Golino– “I do not know of anyone who has served on the CCAC who has the particular background you do as an economic historian with wide-ranging interests, nautical anthropologist and numismatic curator and am interested in how that set of skills and experience will inform and shape your work for the committee.”

Peter van Alfen– “I’ve always had eclectic and far-ranging interests, something I’ve probably gotten from my father, who despite his profession as a microbiologist, is an intellectual and historical omnivore, and a self-trained woodworker, winemaker, and farmer. Like him, I read broadly, following various tangents as far as they will go, and try as well to develop new skills. My own training in the Classics has set me up well, I think, for any sort of intellectual, historical, or artistic inquiry, not just because of the necessary language training (Greek, Latin, German, French and Italian), which makes accessing source material easier, but because it taught me how to conduct research in a rigorous fashion and how to analyze things carefully, which are the hallmarks of the philological tradition of the Classics.”

“In recent years, I’ve become quite interested in the history of the United States and of New York City, particularly in the 19th century, so have been immersing myself in social, political, economic, naval, and, of course, numismatic studies of the period. With this pursuit, and having access to the ANS’s immense collection, I’ve developed a good understanding of the US Mint’s output over the last two centuries, some of the challenges the Mint has faced, and its solutions to them. Overall, I think I can bring something of a long-view historical perspective to the CCAC, certainly back to 1792, when the US Mint was founded, but also back to ca. 650 [BCE], when the first coins in the western tradition were struck in Asia Minor.”

PVA– “The format of coin types was basically set by 300 [BCE] and has changed very little since: head of political authority and/or patron deity on the obverse, civic reference of some sort on the reverse. What I find fascinating is the range of stylistic design within this format and the occasional tensions between modernism and classicism. For example, in the late 19th and early 20th century, at the peak of interest in medallic art, there were attempts to create something completely modern, such as Oscar Roty’s La Semeuse design introduced on late 19th century. French coinage and Adolph Weinman’s riff on the design with his Walking Liberty introduced on the 1916 US half-dollar. Although Roty’s Semeuse lingers on for generations, already by mid-century our 50-cent coin again featured a classic head in profile on the obverse, this time of Ben Franklin. Over the last quarter-century or so, there certainly has been a lot of interest at the US Mint to find ways to break out of this mid-century classicizing mold, as it were, to again find a modern vernacular. I’m excited to be part of that.”

LG– “What exactly does the numismatic curator of the American Numismatic Society do? Most of us have a general idea that it involves maintaining a large museum’s numismatic collection, but I think our readers would benefit from knowing more about what is involved in that position.”

PVA– “My duty first and foremost is care of the collection, which includes not just physical care, making certain coins and items are well stored and labeled, but also trying to make certain our collections catalogue as accurately and completely as possible, which is an enormous and never-ending task with a collection as large and as old as ours is. That curatorial work aside, I spend a significant portion of my time working on our various online resources, like Hellenistic Royal Coinages, editing the quarterly ANS Magazine, taking turns hosting our Long Table and Money Talks sessions, and finally, when I’ve got a moment, doing some research and writing. At the moment, I’m working on some research related to the archaic coins of the Troad and on the private mints of New York City in the 18th and 19th centuries.”

LG– “I have read that you study European and U.S. medallic art from the 15th to 21st centuries and would like to know more about your interest in those areas.”

PVA– “That interest developed by happenstance and serendipity, as most of my interests do! Having access to the ANS’s collection means I can pull trays randomly to explore the numismatic production of various times and places. On one such foray into the trays many years ago, I was randomly pulling trays of 19th-century French medallic art and became awestruck with their artistry. Soon I was spending more time in that part of the collection, as since we did not have a curator of medallic art at the time, I took it upon myself to take on the curatorial duties for that section as well, roughly 60,000 objects. Over the years, I’ve become more appreciative of having the ability to switch back and forth from the Greek section to the medallic art section. On those days when I’ve had my fill of, say, the coinage of the Ptolemies, I can find refuge in the art of Pisanello, Champlain, or Saint Gaudens.”

LG– “Are you a collector yourself of coins and medals and if so, could you please tell our readers which areas appeal the most to you?”

PVA– “I have a respectable collection of 19th- and 20th-century medals. More recently, however, I’ve become quite interested in banknotes and their artistry, in no small part thanks to Mark Tomasko’s book The Feel of Steel (ANS 2012) and various conversations over the years with Mark about banknote engraving. This, in fact, has led to a recent collecting tangent: 19th-century engravings, aquatints, and lithographs of New York harbor, many of which are surprisingly affordable.”

LG– “What do you think about the quality of the art on modern U.S. coinage, specifically, on the designs that have appeared on our coins in recent decades?”

PVA– “It is hit and miss, as you would expect with a major and relentless producer like the US Mint. The 2017 American Liberty 225th Anniversary gold coin, for example, is an impressive artistic tour de force, one that combines a thoroughly satisfying blend of classicizing elements (head obverse/eagle reverse) with modern stylization (Liberty as a Black woman/the eagle in flight with wings on the downstroke). The less said about the misses the better!”

LG– “Finally, do you have any advice for someone who wants to get started collecting ancient coins?”

PVA– “First, the more you understand about the context in which the coins were produced (artistic, political, economic), the more interesting they become, so read as much as you can. Second, collect what appeals to you no matter how esoteric it might be. And third, do be aware of provenance issues and collect responsibly.”
The author and CoinWeek are grateful to Mr. van Alfen for sharing his fascinating insights and passion for coinage and medallic art with our readers.