There are over 160-years of records in the archives of the American Numismatic Society (ANS), including correspondence with big names inside and outside of numismatics–Victor David Brenner, Hermon MacNeil, Thomas Elder, Cornelius Vanderbilt, B. Max Mehl, Tiffany & Co., and so on.

Sometimes it’s easy to discover what we have because names that appear on folders have been listed in our archives database, ARCHER; other times it’s not. Some correspondence was placed in folders designated only by letters of the alphabet. Correspondence with Pietro Oddo, for example, might only be found in general “O” folders. Then again, even if “Oddo” folders exist you still have to check the “O” folders because in some years (or even in the same year!) his letters could have ended up there.

There is great stuff in these alphabetical files, but you have to dig for it. 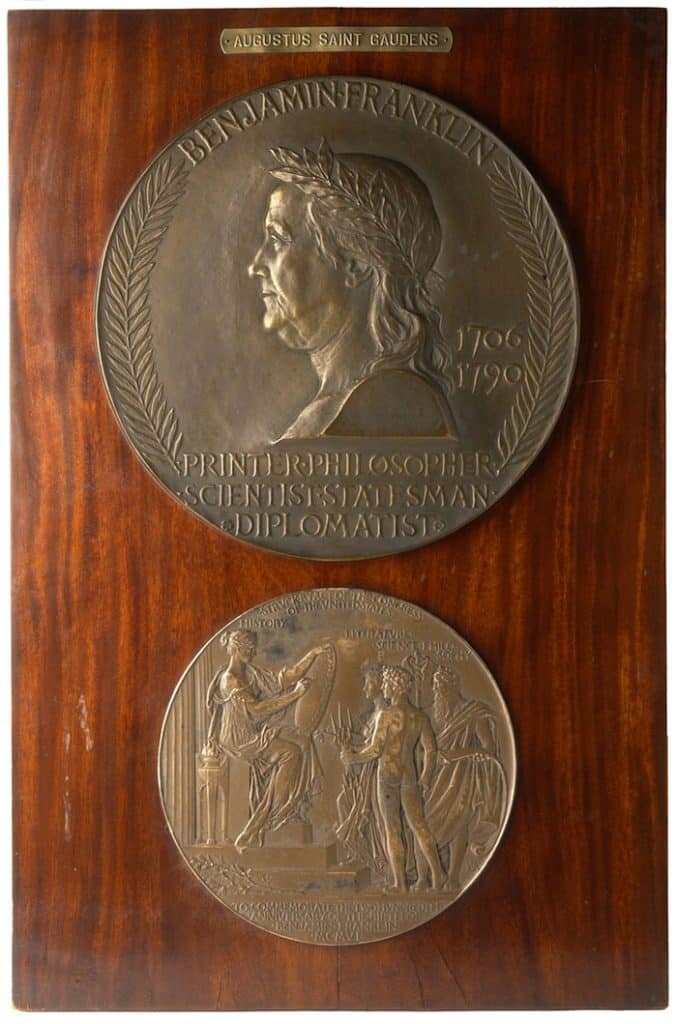 A couple of weeks ago, ANS Fellow and numismatic author Scott Miller happened to be digging around in an “S” file when he came upon an interesting exchange of letters regarding the Benjamin Franklin 200th anniversary medal struck by Tiffany in 1906. At various times and places, this medal has been attributed to Augustus Saint-Gaudens, to his brother Louis, or to both of them together. In 1927 the Medallic Art Company (MACO) wanted to restrike the medal. Uncertain of the attribution, the company’s Clyde Trees wrote to Augustus’s son, Homer, for guidance.

Trees told Homer that according to sculptor James Earle Fraser, Louis had done the original designs, and the reverse was certainly his, but the “obverse side was entirely changed by Mr. Augustus Saint-Gaudens” and so it was “beyond question the portrait was his work.” Furthermore, Trees’s associate at MACO, Henri Weil, remembered Augustus being actively involved in bringing the project to completion. He had visited MACO, where the dies were made, several times to ensure that everything was just right. Trees also noted that the ANS was displaying large casts of the medal, credited to Augustus. Trees’s solution to get around all this uncertainty was to attribute the medal simply to “Saint-Gaudens.”

“I cannot subscribe to the notion that the Franklin Medal was in any way the work of my father,” he wrote. “Even though he put a great deal of time and trouble into it, it was primarily the work of his brother, Louis.”

His father, he said, always considered it to be Louis’s work.

He also disapproved of Trees’s plan to credit the work simply to “Saint-Gaudens,” as this would be “equivalent to saying ‘Augustus Saint-Gaudens,’ as far as the general public is concerned,” which was as true then as it is today. As for the ANS, Homer told Trees he would write to the Society immediately, which he did, asking that the labeling be changed “in the interest of accuracy and justice.” Secretary Sydney Noe assured him the alteration would be forthcoming, but judging by the plaque seen here, now in storage at the ANS, Noe never got around to it.

But I shouldn’t have been so quick to doubt Sydney Noe!

According to my colleague, ANS U.S. curator Jesse Kraft, the attribution on this plaque is correct. He explains:

“The way I’ve understood it is that Augustus sketched the first design (with wreath on his head and the statuesque shoulder) and his assistant, Henry Hering, sculpted it in 1905. Augustus had Henri Weil make a galvano and a reduction. This was the very first reduction Weil made on the Janvier, prior to advertising it and Bela Lyon Pratt getting in touch with him. Augustus, however, didn’t like the design and said Franklin looked like “an old woman wearing a tiara.” Augustus then gave the model to brother Louis, who scrapped Hering’s design and completely redid Franklin (but used the same exact lettering and flanking branches—literally the same basin). If I’m not mistaken, the finished medal wasn’t struck until 1907 because of all of this (or at least late 1906, later than had been expected). So, the galvano in the image with the Augustus Saint-Gaudens nameplate is correct (as it is the first version), while the second version (below) is the finished medal and the work of Louis Saint-Gaudens.”

If this was the plaque being referred to at the time, it would explain why the label was never changed. For more, Jesse suggests having a look at this medal. Thanks, Jesse!