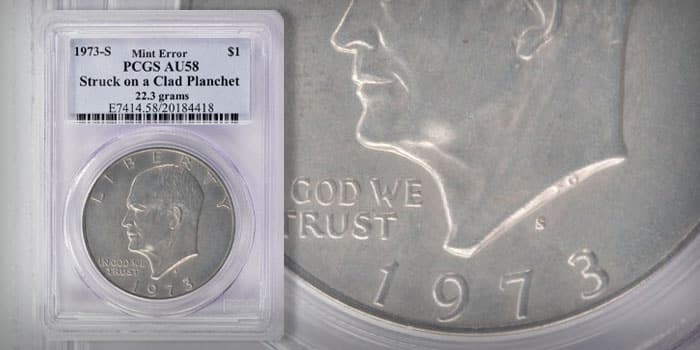 Struck on a Clad Planchet 22.3 grams

One of Only Two Known

This is an amazing and extremely rare Eisenhower Dollar off-metal. Mint State Eisenhower Dollars struck in silver came in special sealed U.S. Government blue packages (referred to as Blue Ikes) and were sold starting in 1971 through 1974 at the San Francisco Mint. There is only one other known Blue Ike off-metal, which recently sold in a Stack’s Bowers auction for $48,000 USD.

To illustrate and compare how rare off-metal Blue Ikes from the San Francisco Mint are, there are approximately 45 Denver Mint Ike Dollar off-metals that were struck in 40% Silver instead of Clad. Recently in a Heritage auction, a 1977-D Eisenhower Dollar struck on a 40% Silver Planchet sold for $26,400. The second known example (this coin) was featured in a July 19, 2011, Coin World article detailing how it was “obtained at face value from a California bank [and] has been authenticated as a 1973-S dollar struck on a copper-nickel clad planchet instead of the intended silver-copper clad planchet.”

The estimated 45 known Denver Mint 40% Silver Ikes are dated 1974-D, 1976-D, and 1977-D. There are reports of three known 1972-D Ikes struck on 40% Silver Planchets. The Denver silver Ikes are scarce but occasionally available and in no way compare to the two known San Francisco Blue Ike off-metals.

This 1973-S Ike Dollar is lightly toned in attractive chestnut gold. It is very lustrous, well-struck, and only has the slightest rub on the high points. The fields are immaculate, the marks on the portrait and eagle are on the holder and not on the actual coin itself.

Stack’s Bowers described the discovery Clad Ike as “one of the rarest and most significant Eisenhower dollar errors known.” I would absolutely agree with their assessment, and in my 45 years of being a dealer in major mint errors, these two known Clad Ike dollars are as exciting as it gets!