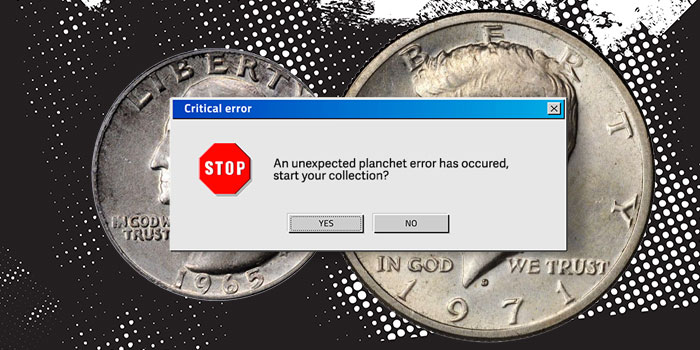 On July 23, 1965, President Lyndon B. Johnson spoke from the White House Rose Garden announcing the Coinage Act of 1965. With this speech, Johnson ushered in a new period of U.S. Coinage. In what the president called “the first fundamental change in our coinage in 173 years”, the Coinage Act of 1965 reduced the silver content of circulating dimes, quarters, and half dollars. Until 1965, these denominations were all struck from a 90% silver/10% copper alloy. Starting with the trial strikes presented by Johnson during this speech, all circulation dimes and quarters have been cupro-nickel-clad copper. Similarly, half dollars were first reduced to a 40% silver alloy and then brought into line with the smaller denominations in 1970.

Why did the U.S. Treasury decide to remove silver from circulating currency?

In a June 1965 congressional hearing, Secretary of the Treasury Henry H. Fowler explained succinctly that the United States Government could not ensure an adequate supply of silver to fulfill the national coinage requirements with 90% silver denominations moving forward. In 1963 and 1964, the Mint used 335 million troy ounces, or just under 11,500 U.S. tons of silver. Compounding this mass consumption of precious metal for coinage was U.S. industrial consumption, which accounted for approximately 538 million troy ounces over the same time period. At the same time, it was estimated that the U.S. Treasury silver stock was decreasing at the alarming rate of 430 troy ounces a year. This was partially due to silver certificates being exchanged at the rate of $1.29 per ounce as well as fulfilling purchase requests for 1,000-ounce pure silver bars.

Also, since the price of silver was expected to skyrocket, speculators began entering the market. One coin wholesale company even sold 33,000 common-date silver dollars or one ton of silver for $39,995 in 1965 ($378,380 adjusted for inflation).

Shortly after Johnston signed the new Coinage Act, the United States Mint swung into action and began striking millions of the new clad coins. This resulted to a number of interesting off-metal errors.

What is an off-metal error? Most simply, an off-metal error is a coin struck on the incorrect planchet. This happens when the wrong planchet is fed into the coin press and struck. As a result, while these errors feature the design of one coin, they will always have the weight and metal content of the host planchet.

In the years directly following the switch from silver to base metal planchets, it became apparent that a number of transitional off-metal strikes had been made. This is specifically when old planchets from the same denomination were used to strike later-dated examples. While still quite rare, one of the most common types of this transitional off-metal strike is the 1965 Roosevelt dime struck on a silver 1964 planchet. As with a number of other off-metal strikes, these were produced when a limited number of 1964 planchets slipped into the production line. This happened most likely since the Mint continued to strike 1964-dated silver dimes well into 1965 in an effort to use the last of their silver dime planchets.

Similarly, a very small number of 1965 quarters were struck on old 1964 silver quarter planchets. Supposedly, the old planchets had become stuck in the tote bags that were used to store blank planchets prior to being struck. There are also several 1964 quarters and dimes struck on clad planchets.

Even if these early first-year transitional off-metal errors happened by accident, it is hard to believe that this next example was anything but intentional. In what can probably be considered a unique occurrence, an old silver quarter planchet was fed into the coin press in 1967. There is, however, no trace of this being an overstrike, so it was probably a blank planchet and not a previously struck coin used for this error. As to where the worker got a two-plus-year-old blank silver quarter planchet, who knows?

These are all transitional off-metal errors with the correct denomination planchet. Yet Heritage Auctions sold a 1964 Kennedy half dollar struck on a clad quarter planchet in 2021.

Later on, after the transition to clad planchets was completed and the last transitional errors were struck, off-metal errors continued to be produced. For example, in 1969, a Lincoln cent planchet was struck with Kennedy half dollar dies by the San Francisco Mint.

In 1971, after the Kennedy half series composition was changed from 40% silver to cupro-nickel copper, several examples were struck on the old silver planchets. As the Denver Mint struck a number of 40% silver Kennedy halves in 1970 for Mint Sets, these planchets were most likely left over from the earlier issuance.

Similarly, a few quarters were struck by the Denver Mint in 1977 with leftover silver-clad planchets used for San Francisco’s 1976 Bicentennial issuance. First discovered by Bernie Steinbock in 1981, there are only three known examples of this unusual error. It is unknown how or why the planchets left the San Francisco facility before reaching Denver.

Another interesting off-metal silver error comes from the Eisenhower dollar series. In 1974 and 1977, Denver struck a number of what should be standard clad examples on special 40% silver planchets designated for use at the San Francisco Mint–another example of silver planchets ending up at the wrong Mint facility. As of 1988, at least 15 examples had been found. It is likely that more have surfaced in the following decades.

Perhaps the most intriguing post-1964 silver off-metal strike error to come out of the U.S. Mint is this 1982 Large Date Lincoln cent. Not only is the coin actually a double error, as it is double struck, but it was struck on a mysterious 84% silver 16% copper planchet. Although similar to the pre-1964 90% silver dimes, a planchet of this metal composition was not used on any US denomination.

Additionally, it is slightly larger than the .835 silver/.165 copper, ½ bolivar struck for Venezuela. Yet, the last order placed by the South American country for these silver coins was back in 1955. Furthermore, no other foreign nation ordered coins of similar metal content. They were all either 80/20 or 90/10 silver. Maybe a mint worker brought in a planchet from a private token?

Lastly, while not a traditional off-metal error, in 1986, a worker placed an emery disk (a thin grinding disc used to help prepare dies) into the coin press beneath a blank planchet. As a result, this disk only displays the reverse impression, and almost looks like a medieval bracteate.

Hopefully, this brief overview of recent off-metal errors has sparked an interest, as they are quite interesting and often rare. Happy collecting!