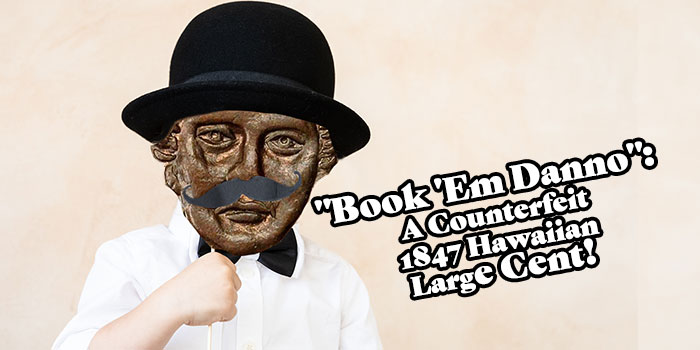 The latest of my summary research articles on the deceptive struck counterfeits features an interesting “early large cent”, the 1847 Hawaiian.

While researching other denominations and varieties of these latest fakes, I had several email conversations with the noted Chinese buyer and seller known as “jalingus” and received these images of “coins” he had for sale at the time. Although interesting, the Hawaiian cent was left for later review; I did post it in a small Facebook group I had initiated and a friend started initial research while I focused on several of the other early coppers that seemed more important at the time.

I note in red one apparent distinguishing feature visible in the low-resolution images received.

As all of the others we have documented to date (now 26 different examples) there is a suspected genuine “source coin” involved, but in this case, determining which example was the source was made difficult by the timing of each one we “discovered”. As in all of the researched subjects, a timeline is important in an effort to establish which is “live or Memorex”! It is rather ironic in my opinion that the earliest documented example was sold in Hong Kong.

It is of interest to note the 2010 Baldwin example is the earliest one we have documented to date; several others from the group of highly deceptive fakes date back to 2008.

During our research of any subject coin, we review the offerings of several known (to us) bad internet sellers. That is how this example surfaced. From it, we noted some of the circulation marks we thought significant and useful for looking for more:

Two additional examples also quickly came to light, with both being certified “genuine”.

The noted “depressions” at the date between the 8 and 4 as well as on the rim became the “go-to” characteristics in searches for additional examples.

Continued internet searches turned up the following example from a 2013 Stacks Bower’s sale; this one may be the genuine source coin. These were the best images we found and took advantage of the opportunity to mark several possible marks to match to other examples!

This is the highest-graded example we have found to date as well, TPG-certified as MS-64 BN. Would love to find a listing for this one prior to the 2010 Baldwin sale to help substantiate it as the probable source coin, but we can make an argument it is noting its high TPG grade and original-looking surfaces.

It is interesting to note that this auction included several other deceptive struck fakes in other denominations. Three of the “coins” in question and this one were indicated as from the same consignor.

And from another Stacks Bower’s auction, this one from 2014 (indicated as being consigned from China): Comparing this one to the others documented at that time we noted the NGC grade was the same as the Baldwin example; although we could not recover the cert number for it we do note some apparent similarities to suspect they were the same “coin” although the low-resolution Baldwin images prevent being positive.

And of course, another example came to light as we continued the research, this time from an earlier Stacks Bower’s sale!

At this point, we turned to some of the cert series we knew had other suspect examples from apparent bad submitters and found three more to add to the “family”.

The following three sets of images all courtesy NGC and all appear to show the main rim “dent” of the others.

In conclusion, I can again report this investigation has been a collaborative effort with several EAC and Dark Side members instrumental in the sharing of pics and info in the effort to “get the word out”, and I would like to thank you!

I would especially like to thank my friend and fellow DarkSider Nick Tobergte for his help in researching and reviewing this particular counterfeit; we discussed writing a summary article on these and hopefully, this work does justice to the joint effort that made this one possible!

As in the other summary articles, it is difficult to determine which is “live or Memorex” just from images, but it is clear that there are several fakes in this “family”.
And if you do cross paths with another of these Hawaiians please take note and REPORT/”BOOK” ’em, as the truth is out there!

With the help of a lot of friends, the research continues.