A recent internet listing for an 1804 “C-6” half cent was the motivation to pull this information together for presentation. I actually sent a note to the seller about the listed example (which he replied is genuine and came from a respected US auction house) as follows:

Coming from “a respected US auction house” really doesn’t mean much in my opinion in terms of the current environment of high-grade counterfeits; I have documented fakes sold in a few of the major ones here with all being in top Third Party Grader’s slabs as well. In each case, all that protects the buyer is his own knowledge and the auctions house’s/TPG’s guarantee, like yours.

The 1804 C-6 is a commonly used platform for current counterfeits and always warrants a second look. In the case of yours, I’ll start with the obverse – I have included an image of yours to a known genuine example (attached).

This die pairing ALWAYS has the spiked chin feature, but yours is diminished or tooled as you can see. Also, the “fingerprints” seen on all are also diminished on yours (image courtesy PCGS as well).

On the reverse, the die breaks of the early state only partially show on yours, from the fraction to “U”- most are tooled away, either in the die to strike this or the coin itself which should include a break through the tops of “MERIC” and at the top of “OF”. From the images, it doesn’t appear the coin is doctored though.

And yours appears to have a break over HALF which isn’t seen in any die state of this variety. I am curious what the edge looks like – maybe you could post an image? Image of attribution marks of this die pairing courtesy PCGS

Going to my saved files I reviewed several other examples that have actually been submitted to Third-Party Graders (TPGs) previously! The following one was submitted and not authenticated:

And the following submitted to another top TPG and also returned “body bagged”: 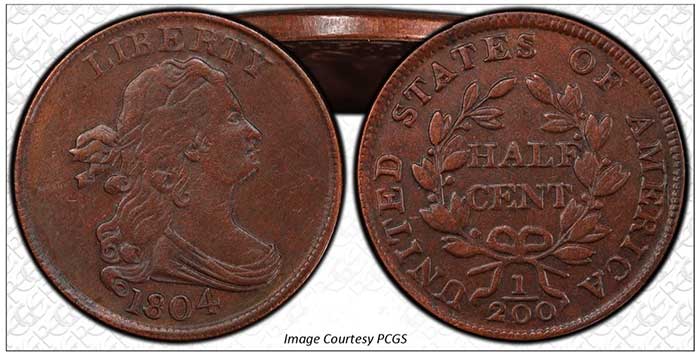 And for the “all in the family” part of the story, the following were also submitted and returned: We have seen every date from 1800 to 1808 with this same reverse–not really what is meant by “collect the whole series”.

It appears there are at least two different obverses used with a common reverse to strike these. To quote a knowledgeable numismatist and friend:

“[T]hey used an 1804 spiked chin obverse to make a hub. They then removed the date from that hub to make dateless obv dies and punched the different dates into the dateless dies. They do come from more than one obv hub though as the 1806 and 1807 that Jack posted are from a different obv hub (I don’t know what date/variety was used to make that hub). You can see that on the spiked chin hub the highest wave of the hair is under the upright of the R in LIBERTY. On the non-spike chin hub it is below the center of the R. There may be other hubs as well”…

And as always one of the best ways to protect yourself from this type of fake for sale is to learn the series yourself. Buy the reference books. Join a discussion group or club focused on your interests–such as Early American Coppers (EAC)–and ask experienced members and friends. Review similar items on the internet – major auction house sales archives and NGC and PCGS’s variety pages are great on-line resources.

There is nothing more deflating to anyone in the Hobby but especially to new folks getting started than making this type of mistake purchase.

PS – As always, the research continues to be a collaborative effort with many EAC members and friends participating.