Continuing the theme from my previous CoinWeek article on the “family” of 1804 “C-6” struck counterfeits with another improbable die combination in the half cent series, the obverse of 1835/reverse of 1826! I decided to start this installment off with one of the most recent examples from the internet and my communications with the seller:

The listing was ended and I sent a final follow-up note asking the status of this example and received the following response:

Besides the “zipper mark” I identified in red on the reverse image I also indicate a possible “attribution mark” for the counterfeits with the obverse “gash” in the bust! The other two examples referenced in my note and shared with the seller are as follows: Attribution is one of the first steps I take in researching a suspect coin; if the coin can’t be attributed then that’s a clue that “Houston may have a problem!” There are many quick online sites to aid with this critical part of the review, including PCGS CoinFacts and NGC’s VarietyPlus.

Being in a coin club like EAC that specializes in the series is invaluable, as are focused Facebook groups. I find myself often asking experts in the series to verify my attributions.

One other thought on attributions to note. When reviewing examples of interest one would look for matching genuine variety attribution points and features like what are indicated in green in several of these images. But you would NOT expect to see matching circulation marks from one example to another (indicated in white between similar examples)–this is a great indication that we have a counterfeit issue!

And continuing to attribute “interesting” examples in internet selling venues, we ran across much of the “family” for sale by a single seller! His offerings included four different dates with matching gashes on the bust, the “zipper” mark on the reverse, the head of ’35 and the reverse of ’26 – all unquestionably counterfeit. This particular seller wasn’t as positive or receptive as the first when notified of the issues. Long story short, the listings were ended but there is no way to know where they went from there.

An interesting note: the head style changed for these in 1833, so examples dated 1833-35 are a little more deceptive than the others since the profile is correct for those dates.

For the previous imaged “1834” though, the bust has the same gash in it and the same wrong “zippered” reverse as the other fakes. If compared to the obverse of an 1834 C-1 (the only variety for the year), you would see that the date just isn’t quite right: And, as always, one of the best ways to protect yourself from this type of fake for sale is to learn the series yourself. Examples won’t always be this easy to authenticate. 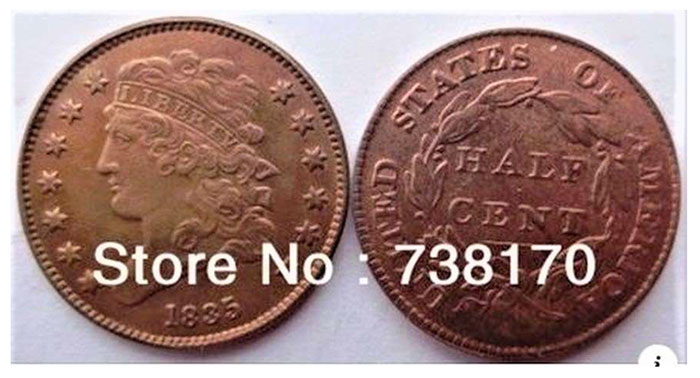 There is nothing more deflating to anyone in the hobby–but especially to new folks getting started–than making this type of mistake purchase. Arm yourself with as many resources focused on your area of interest as you can, both on-line and off! And never be afraid to ask others with additional experience and knowledge to aid you to make an informed decision about what is “Live” and what is “Memorex”…

The research continues to be a collaborative effort with many EAC members, focused Facebook group members and friends participating.