There was literally a frenzy of interest in these sets. Thousands of opened, unopened, and graded sets traded on e-Bay and elsewhere, and for a while prices were rising almost daily, as is the usual pattern following the sell-out of a hot Mint item.

Interest in the sets remains high, and many were bought and sold at the recent FUN show held in early January in Florida, but the frenzy seems to have cooled a little bit, as collectors turn to other issues and prices begin to stabilize.

Graded sets, especially those with a perfect MS/PF-70 grade for each of the five coins in the set, have been eagerly sought by collectors. But as I suggested would happen last fall, prices for 70 sets have fallen dramatically from what they were bringing when the sets were first released. 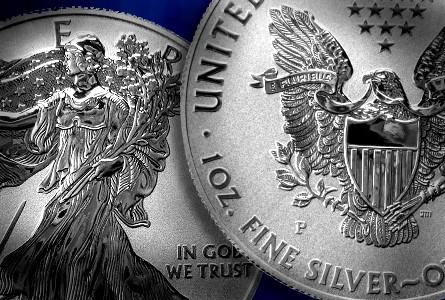 Raw sets have been bringing approximately $750, but many retail coin dealers charge $850-$1,000. I have noticed that many sell out quickly of their stock of sets.

Sets graded MS/PF-69 are now trading at the same levels, or just above, what raw sets bring. Not long ago they sold for a premium of a couple hundred dollars over a raw set.

With all the sets being graded it will be interesting to see how many fresh, original raw sets remain in several years.

With more buyers and the same supply of sets (250,000 total but with no estimates of how many raw sets remain), prices went higher. Raw sets are now fetching close to $500, whereas before the release of the 25th anniversary sets they could be had for $400 or less.

I predict that unopened 25th anniversary sets, which are eligible for submission to the grading services, will be remain a hot commodity, and prices for them may eventually reach almost the same level as 70 sets. An unopened box of five sets recently sold for $4600, or $920 per set.

The Mint and grading companies

Meanwhile, tempers remain flared among many collectors, especially towards the Mint, but also to a lesser degree towards the leading third party grading companies, especially because of their requirement to ship the entire unopened box and then pay a special fee to have it returned.

Because so many sets are getting 70 designations values for 70 sets and singles have dropped significantly from initial levels.

On the other hand, since we can not check the quality of unopened sets prior to submission to the grading companies, it is a real gamble to submit them in hopes of getting the top grade. If one receives 69’s or less, it is hardly worth the considerable expense and trouble of sending them in.

Another important point is that the percentage of sets that have been graded 70 by NGC vastly exceeds those graded 70 by PCGS even though retail prices are not always different for the two.* For example, at Modern Coin Mart (http://www.moderncoinmart.com) the NGC and PCGS sets both sell for $1450. Eventually, prices for PCGS 70 sets should be much higher than NGC sets.

The U.S. Mint continues to be the subject of almost constant criticism from collectors who were unable to order a set from the Mint, or who did, but who feel the Mint botched the release of these sets.

There is a broad consensus that a household limit of five was too high for a set that appealed to so many collectors. Views are more diverse on whether more sets should have been made. But I think we should also give the Mint credit for producing a beautiful set that should perform well in the coming years.

A major development that emerged from the recently released U.S. Mint Annual Report for 2011 is that the Mint is considering releasing another San Francisco burnished coin, a 2012-S eagle. The report says the Mint officials look forward to expanding the burnished eagle “S” series this year.

Some collectors were upset by this news because it means only one coin, the 2011 reverse proof, is now unique to this set. Moreover, if there are more “S” mint coins, and since there was a reverse proof in 2006, no coin in the set would be totally unique.

But first of all, it is not a done deal that the Mint will issue more “S”mint eagles. And second, what really matters is the mintage levels rather than the uniqueness of coins, at least in my view.

Since the mintage of the 2011-S remains at 100K it will still be the lowest mintage non-proof silver eagle issued. Unless the Mint issues something later with a lower mintage, this coin will remain a major key.

I would recommend holding on to any sets you own for the long haul if you can, and don’t worry if they start an S mint series. If there is a 2012-S, it will undoubtedly sell several hundred thousand. Besides, who knows what they will do for the 30th anniversary, though I doubt it will have a mintage lower than 100K after all the flack about the 25th anniversary sets.

One key factor that should help support higher prices for the 25th anniversary sets is the fact that so few people own the entire mintage. The Mint has indicated that the average order was for 3.7 sets. Factors in the dealers and e-Bay entrepreneurs who managed to get far more than 3.7 sets, and this means that something like 20,000, or more likely even fewer people, own all 100,000 sets.

A significant number of them appear to be owned by collectors who plan to hold on to their sets for the long haul, even if they bought multiples, and an ever-expanding number of silver eagle collectors, should mean higher price levels in the coming years.

Finally, there is the issue of possible new varieties and error coins from this set, which I will address in a separate article soon.

*To illustrate the point I examined the population information on the PCGS and NGC web sites for two of the coins in the 25th anniversary sets. At NGC 72% of the 2011-W coins received MS-70, whereas at PCGS only 54% were given the top grade. For the 2011 bullion coin, the NGC number was 70%, and the PCGS figure was 52%. The figures vary from coin to coin in the set, but the pattern is there. It is clear that PCGS gave out the top grade much less often than NGC.